Integrating citizen residents into "business" improvement districts: Capital Riverfront district as an opportunity and example of the need for change

Business improvement districts are commercial district management and marketing organizations that are sanctioned by local jurisdictions as managers of public space and other activities within a defined geography. They were created to provide extranormal services that increasingly were beyond the capacity of a city to provide and typically were organized in the main business district of a city, although many cities have multiple BIDs.

They are funded by an add-on assessment to commercial property taxes.  As a result, leadership and agenda of the organizations tends to be dominated by property owners, although there are usually slots for retail business tenants as board members.  By default, the organizations become the day-to-day managers and long range planners for the public space within their defined districts.

An issue is that BIDs are two different functions in one, a financing mechanism and a community manager.  It's possible to split the functions, or to organize them differently, but for the most part that kind of nuance eludes elected and appointed officials.

There are some variants of the format, where resident interests are engaged both as taxpayer funders of the organization (this can be controversial, e.g., there is a vocal group of opponents to the Charles Village Community Benefits District, which includes both residents and businesses as tax paying members, that hasn't stopped resisting since the organization was created in the 1990s) and as board members, but this is rare.

San Francisco has a program that allows for a variety of types of districts, which can include resident participation, including participation as board members.  San Diego's BID financing program is used by some neighborhoods as a way to fund Main Street oriented commercial district revitalization initiatives, which are more ground up community involved approaches, than the typical top-down BID approach dominated by large commercial property owners, although board membership still favors business owners.

A problem comes up as these districts become more mixed use, with a large residential component, because there are few if any provisions for adding residents to oversight boards of the organizations. You can't expect an apartment building owner represented on the boad of a building to be advocating very well for residential interests if they are opposed to the interests of property owners. 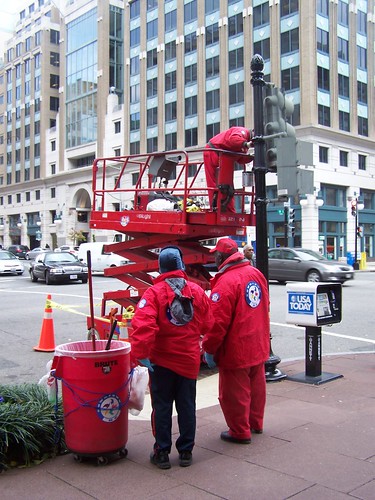 While everyone appreciates well managed "public spaces," they become more mall-like and private and lose some of their public character and potential for spontaneity when the public has limited say in how they are managed.

This type of the issue is likely to come up more often going forward as business districts become increasingly residential and cities increasingly work to offload management and financial responsibility for operating "new" parks--instead they are concerned with coming up with the money to manage their existing footprint (e.g., "Can Columbia afford to operate 56 public parks?," Columbia (SC) State).

Business improvement districts are the entity most likely to be parks managers in urban mixed use districts.

A few years ago I wrote a piece, "NoMA revisited: business planning to develop community," about the NoMA district in DC, which when it is built out, will have between 6,000 and 7,000 residents.

I recommended that DC plan for mixed use commercial-residential districts by changing the organizational format of "B"IDs to CIDs--community improvement districts--and provide a way for residents to be represented on newly reorganized CID boards and in the management oversight of the organizations.

NoMA isn't the only place where this recommendation is relevant.

The last couple days I spent in meetings related to the 11th Street Bridge Park project, and this came up in a discussion about management of the proposed park, policies, and civic engagement.

Someone mentioned that the Capital Riverfront "business district," the area around the Nationals Stadium and the US Department of Transportation, which is increasingly dominated by multiunit residential buildings.  According to this article, "Navy Yard/Capitol Riverfront: After a Rain Delay, the Stadium’s Boomtown Starts to Deliver" from Urban Turf, the district is expected to have as many as 5,000 residents next year, although most, a mix of condos and apartments, will live in large multiunit buildings.

Two of the signature elements of this district are Yards Park (pictured at left) and Canal Park, which are public parks, owned by DC, but managed by the local business improvement district, and built by private interests as part of development agreements.


What happens is that the management of public facilities is in effect, privatized, because of limited oversight of and civic participation in the "nonprofit" "community serving" organization that is more a property manager than a civic engagement enabler.

While there is one residential property owner, a condominium owner, on the board of the Capital Riverfront district, and there are some slots for community stakeholders as ex-officio members membership is overwhelmingly dominated by commercial property owners.

This BID, and others, are good candidates for conversion to CIDs.

This may be way too radical, but why can't DC move to a system where the ANCs funciton as a BID?

(In fact, that is to some degree what Arlington has).

Clearly, there are a lot of ANC that are not up to the task. But making them more responsible for doing stuff, rather than just approving and commenting, might make them more useful.

(It's the difference between writing a blog entry, and commenting on one)

Then again, you might need to be more granular. I've settle for street improvement committees.

Matthew Yglesias proposed a not very good idea, giving ANCs a cut of property tax revenue from new developments, to encourage them to be in favor.

I think your idea has a lot of merit, but would be tough because of that issue of many not being up to the task, often, sadly in the areas that need such assistance the most.

I mean you'd think W4 would have some decent ANCs, but I think mine is a joke, really not good, but capable of doing decent enough stuff from time to time.

2. However, there are some precedents that support this idea, that I've written about before. Minneapolis had a TIF funded revitalization program that would assist neighborhoods. But they had to create a vehicle for participating, get training etc. There was a big capacity building component.

LA introduced Neighborhood Councils after the attempt at succession in the San Fernando Valley.

Seattle and Columbus have neighborhood councils/commissions (Columbus had the first "ANCs"), but these are more corporatist and represent organizations and groupings not individuals.

3. Back in the mid2000s, I pushed ANCs to create transportation and public space committees. ANC6A did, and so have some others.

But again, there is not much capacity building-technical assistance and idea generation.

Although I haven't read the transportation plan draft (fatigue), which maybe sets a new direction. The trick is to get the agency to follow it, let alone the citizens.

(Comparably, my criticism of the Riders Advisory Committee of WMATA's "report" on providing service to the airports when I said their frame of reference and knowledge was limited, making the recommendations underwhelming.)

Well, a broken clock is right twice a day.

It isn't that dissimilar to Arlington, actually. Although that mostly resulted in speed humps being placed everywhere.

But in terms of PSA, ANC, and BID, you've got three basically overlapping circles. To use a term from the holy roman empire...

And yes, transporation and pedestrian improvement needs to be part of it as well. Local tranport districts.

Of course, none of these are talking to each other.

Most ANCs (not mine) have a planning-zoning committee. I was on this committee for ANC6C from 2003-2005.

That was when I was involved in Main St. and DC contracted with the Nat. Main St. Center for trainings. So we had plenty of opportunities to do the Main St. 4 point training (1/2 days on each of 4 areas, including "design").

They were open to everyone. I kept trying to get ANC6C P&Z committee members to go, they never did. I tried to get them to pay for a subscription to Planning Commissioners Journal and Zoning Advisory Review (the latter an APA publication) and they never would.

Separately I kept proposing that the city should set up an "Urban Information Center" at MLK, comparable to the initiative at the Dallas Public Library (there is a link on this blog), where they get all kinds of relevant publications, like Urban Land, etc.

Separately I have been proposing the creation of "Transportation Management Districts" since around 2004-2005. No one has taken the initiative. I proposed it for H St., and for the Eastern Market interest area...

The "performance parking districts" should function as an overall TMD, especially the improvements funding protocol, but they don't. and ddot doesn't have a knowledge-best practice capture process to "bake in" learnings and to upgrade practices over time. (ArCo has this problem with their TDM negotiation process too. They say that the developers prefer "predictibility" to continuous process improvement.)

I never did revive the Citizens Planning Coalition. One of my ideas was to create the UIC as part of the operation of it, with technical assistance, as an "action-research" center.

If Bell Clement had stayed the director of HSW, there was a good chance we would have built up that function within HSW, as she thought that the society has a role in addressing contemporary questions of Washington.

And Mass. has the Citizen Planner Training Collaborative.

If DC govt. especially elected officials respected citizens and citizen involvement these kinds of capacity building structures would be constructed.

I am unfamiliar with what Charlie is talking about in Arlington - I am not aware of any govt or even adisory entities below the County level, other than the BIDS and CIPRO (which I thought was effectively a BID)

Also not aware of any local govt below the City level in Alexandria.

Fairfax of course is quite complicaed, with magisterial districts and various local task forces etc.

I think charlie, in the ArCo context, was referring to citizen involvement in general, which has the same kind of impact as DC's ANCs.

Thank you for providing such a valuable information and thanks for sharing this matter.click it...: https://www.dosepharmacy.com