This week's snow wasn't all that, although because it came down just before and during Tuesday's morning rush, it was problematic, especially because, at least in my part of DC, it didn't appear as if there was any "pre-treating" or "salting" of the roads in advance of the snow. 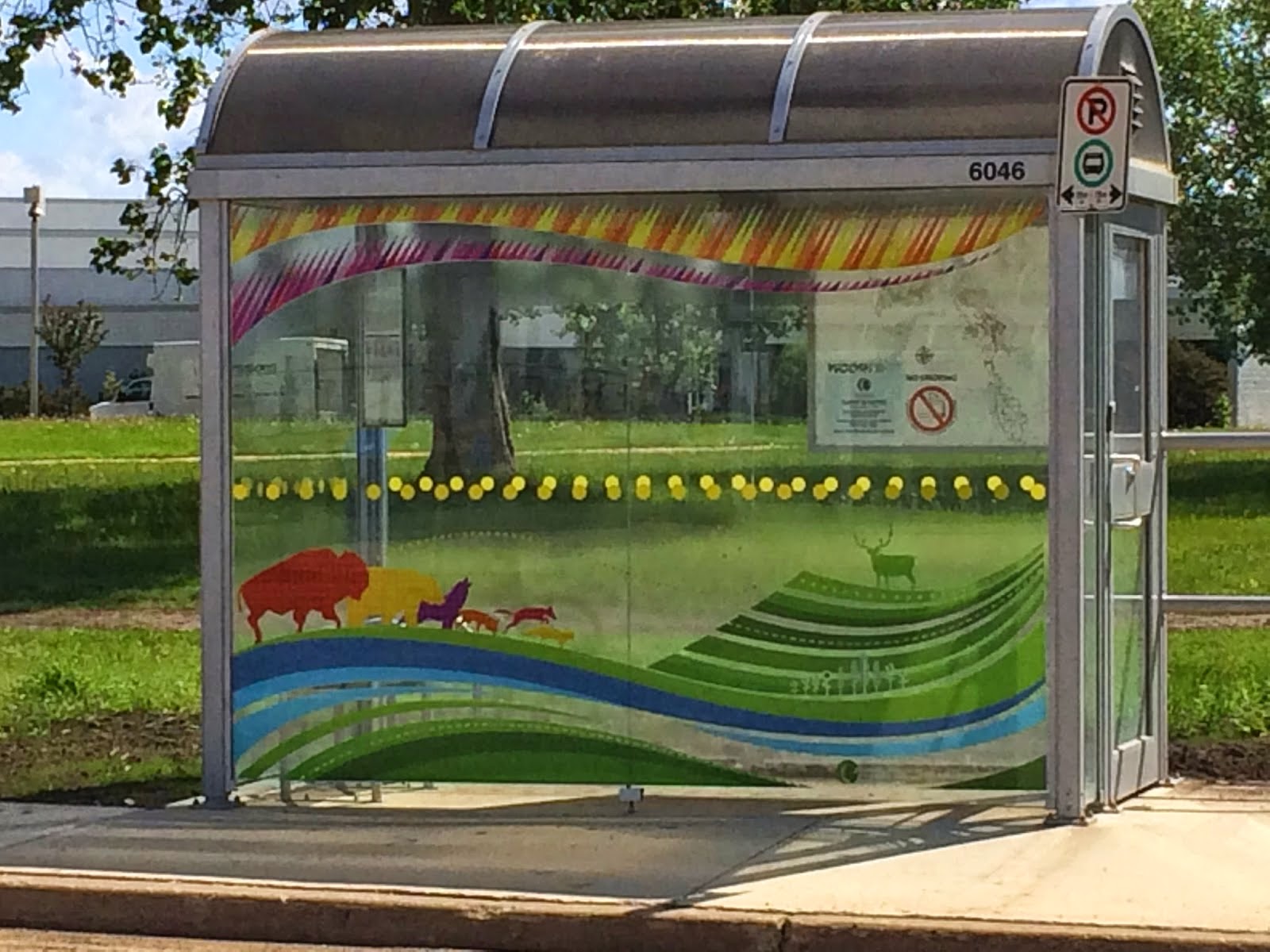 Note the door on this bus shelter in Fort McMurray, Alberta.

The cold we are experiencing following the snow is worse--e.g., Metrorail had problems with cracked rails and other incidents--and although it's not all that frequent, it reminds me that some bus shelters in Minneapolis have heaters ("Heated shelters offer some relief for transit riders," Minnesota Public Radio News).

Plus I learned that the bus shelters in Fort McMurray, Alberta are fully enclosed and heated.  There it gets to 40 degrees below zero.

But the aftermath of the snow reminds me of my main pet peeves when it comes to dealing with snow and sidewalks.  (Also see "A reminder about winter-time conditions for pedestrians, cyclists, and transit users.")  And it's worth cataloging the faults.

1.  Yes, the perennial, some people don't shovel their walks.  At least on my block this seems to be declining but it's still a problem here and there. 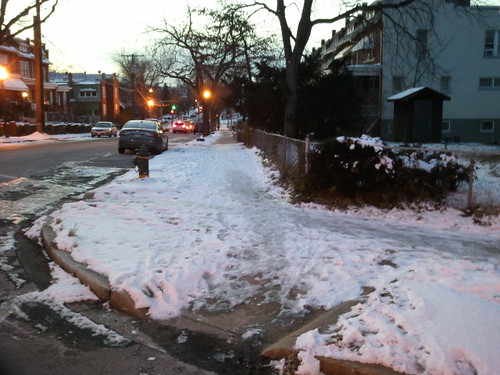 2.  Some people shovel a lane in the sidewalk, but not the entire walk.  This means that people can't walk side-by-side or past each other going in different directions, without stepping aside or walking in the ice and snow. 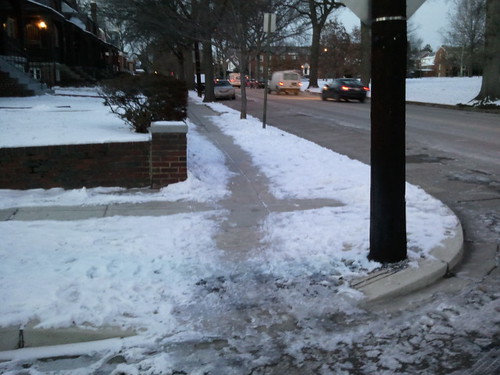 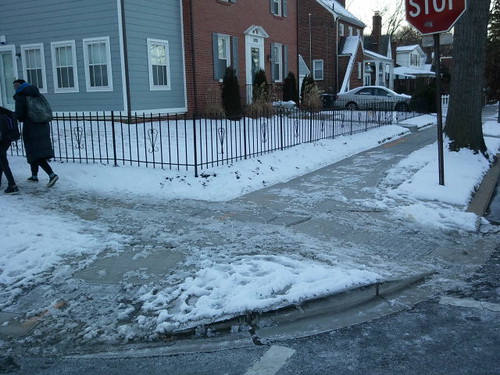 This house didn't shovel along the side of the house and neglected to shovel the corners of the sidewalk up to the street.  They also didn't even bother to shovel all of the front sidewalk, just enough to get to their driveway and a little past.  This house is along a major walk to school route. 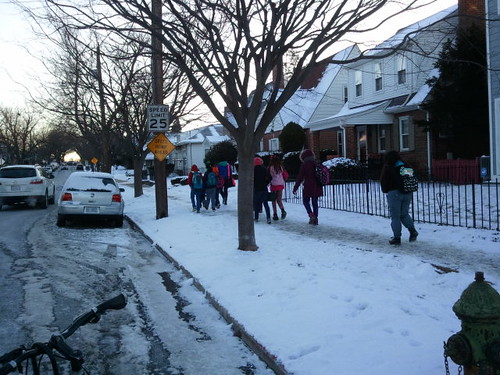 4.  People who live next to alleys often don't shovel the sidewalk across the alley. 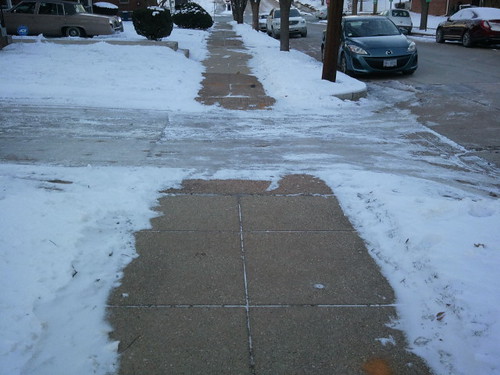 5.  People who live at corners often don't shovel the sidewalk corners all the way to the street. 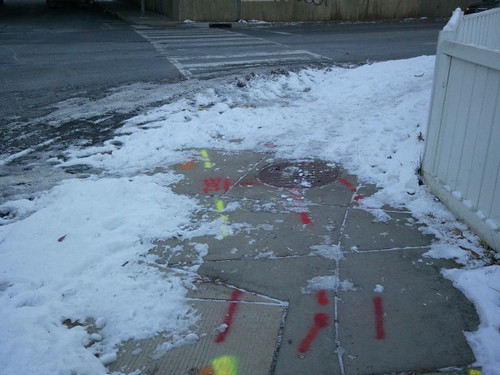 6.  People who live next to bus stops don't shovel the bus stop.  Each jurisdiction, in this case DC government, not WMATA, technically is responsible for bus stop maintenance. 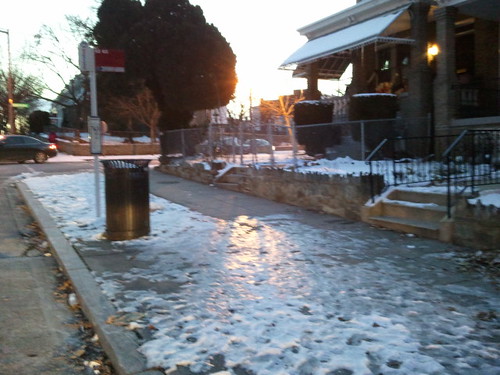 Note that fortunately, bus stops with shelters are maintained as part of the contract with the advertising firm that operates bus shelters. 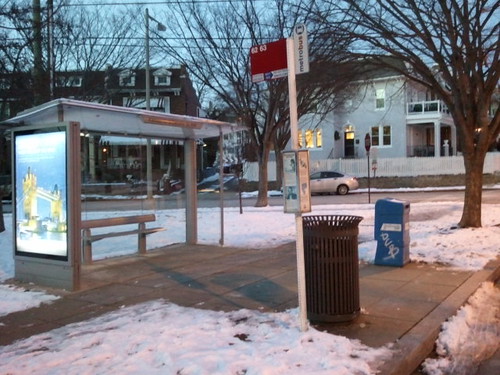 
7.  The city doesn't remove snow from its properties. 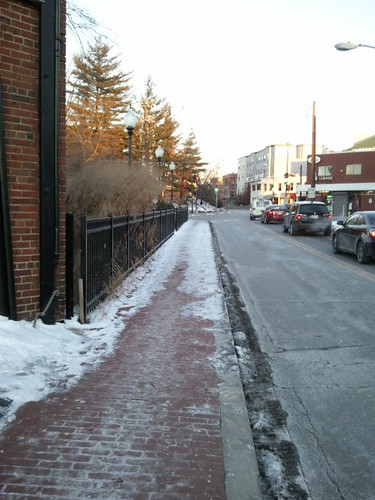 8.  Or if certain city properties do make the effort to remove snow, they don't always have the right equipment. 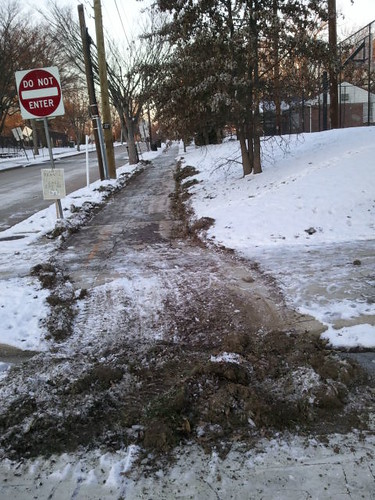 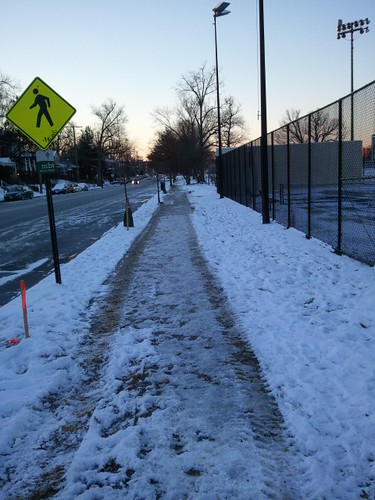 Probably a snow brush would work better on 5 foot wide sidewalks than a scraper, especially if the plow is wider than the sidewalk.

9.  The Federal Government, such as the National Park Service, doesn't remove snow from its properties. 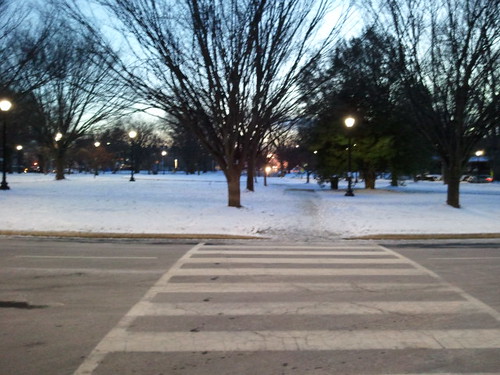 Sherman Circle is an NPS installation.  It's about one block from a school and along the walking route to Georgia Avenue and the Petworth Metro Station.  (Lighting was added after someone was robbed and murdered a few years ago.)

10.  Commercial property owners and retailers don't think about other properties "in their district," which might not be tended to, so customers are forced to walk across snow and ice, along with the corner and alley issues. 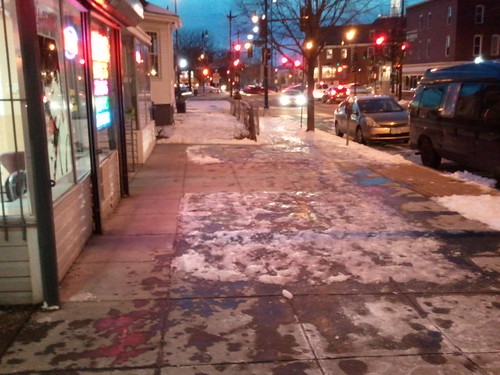 11.  Last but not least, failure to remove snow from bike lanes. 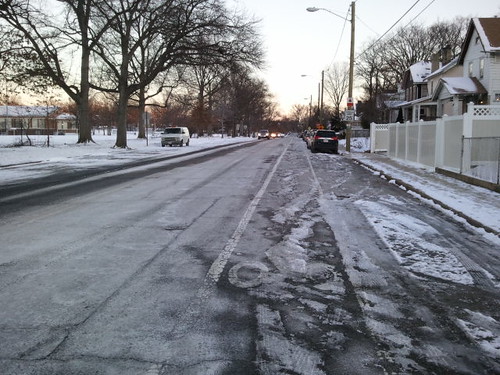 Lincoln Park is always a snow disaster- everytime we have a snow event the NPS basically ignores snow removal- and it is a real hazard as the snow gets piled up from the busy streets alongside the park and basically becomes unusable. Last years snow made Lincoln Park a nightmare. No individual property owners should be fined while official entities - the NPS- and even more at fault- the damn city itself- gets away with not doing shit for snow removal. This is simply not fair.

.d and DPR do a bad job as well. Most public properties are not cleared where I live, year after year after year. We all know that house and business owners are supposed to shovel but the law is never enforced. Less covered are those properties owned the the District government and why no one clears them.

Interestingly, I noticed after this was published that the dirt and grass left in the crosswalk adjacent to Takoma Rec. Center was picked up and removed.

I have been writing about this topic for years and I noticed over time a change with Takoma Rec. Center specifically--because I mention it. For the first couple years they did nothing, then they did part of it, now they do all of it, even if they don't do it well.

Again, the point from the big 2010 post is that this should be an issue of "are we really a city committed to sustainable mobility and if so, how do we maintain this commitment in the face of bad weather?"

Some bike and ped plans acknowledge winter and discuss snow clearance. Most do not.

Minneapolis' bike plan has one of the best sections on maintenance including snow clearance of any plan.

But I haven't looked at their ped plan for guidance on snow clearance...