Sports events and the transit city: participation in transportation demand management shouldn't be an option

One of the many problems with local government "contracts" with sports teams is that the contracts tend to be written in favor of the team.  (See "Stadiums and arenas as the enabling infrastructure for "money-making" platforms" and "An arena subsidy project I'd probably favor: Sacramento." The latter entry includes a framework for shaping stadium and arena projects in favor of better outcomes for the local jurisdiction.)

Some places--especially New York City--deal with this some by having certain provisions conditional within use permits or zoning.  And often, use permits are not granted "forever," but have to be renewed, so that there are opportunities for renegotiations and the addition of provisions based on the operating experiences of the facility over time.

That isn't the case with jurisdictions in the DC area.

Only the Verizon Center has an agreement in place to pay WMATA, the area transit authority, for extended Metrorail service beyond the time when the system would otherwise be closed.

The Washington Nationals have refused to put such an agreement in place, despite the city's preference that they do so and the fact that the city is paying hundreds of millions of dollars for the team's stadium.  The city didn't put a provision for transit coverage in the contract so the Nationals, see no reason to do so.

The difference between Verizon Center and the Washington Nationals is telling.  Verizon Center aims to manage as many elements of the guest experience as they can, including convenient travel to and from their event, while the Nationals don't care enough to extend their management of the "brand experience" to travel.

Like the Nationals, there are issues with the Redskins football team and transit also.

First, they located in a place with deficient transit connectivity, although Largo Town Center station opened in 2004 to serve the area, seven years after the stadium opened to the public.  Second, in the past--less so today--they make it very difficult for attendees to walk from the Metro station to the stadium.  But they have contracted with WMATA to extend service when necessary, to ensure that transit-using attendees can make it home.

But the Washington Post reports in "No late Metro service for Thursday night's preseason game at FedEx Field," that the Redskins haven't agreed to extend service for tonight's pre-season game against the Jacksonville Jaguars.

According to the article, the team justifies the decision on the expectation that the game will end long before the last trains from Largo Town Center, while others argue that the time it takes to get out of the stadium and walk to the station means that it will be cutting it close as the last trains, depending on the final destination, leave at either 11:14 PM or 11:27 PM.

But this shouldn't be up to the Redskins necessarily, having contingency plans in place to provide for extra service if it is needed should be a permanent transportation demand management requirement as part of the zoning and use permits for the facility.

Note to other jurisdictions: be sure to put transportation demand management requirements in your stadium/arena contracts, to ensure that seamless service is provided beyond the time when the transit system normally operates.

Note also that in DC, the stadium and arena are located immediately adjacent to heavy rail stations, although the baseball stadium is on only one line--the Green Line--while Verizon Center is served directly by three lines, and just a few blocks walk to Metro Center, which is served by the transit system's three other lines.

By contrast FedEx Field is not so well located, quite a distance from the Metrorail station.

This came up in a "Fan Day" forum held by the Redskins team in June, according to the Washington Post ("Could the Redskins learn from the Nats game-day experience").  From the article:


Among the most notable features of this spring’s Redskins fan forum held with top team executives: just how many fans referenced policies the football team could borrow from its local baseball, hockey and basketball counterparts. And as I recall, the Nats were cited most frequently among Redskins fans trying to improve the game-day experience at FedEx Field.

Now, no one would say that a day at Nats Park is perfect. The stadium itself is often described as forgettable. Fans often leave early, especially because there is no plan to extend Metro service in the case of extra innings. Lines can be long, there are often throngs of visiting fans, and there have been complaints about the apathy in premium sections and the uninspiring views of the city.

... The second-biggest difference, fans would argue, is stadium location. Nats Park is in the city, near bars and restaurants and a short walk from Metro, while FedEx Field is in the suburbs, without much nearby entertainment, and nearly a mile from Metro. These realities pre-date Daniel Snyder, and they aren’t going away any time soon.

The article makes a number of recommendations on improving the game day experience, including physical and programming improvements between the stadium and Metro station, because:

Note to other jurisdictions: when you have rail-based transit systems in place, be sure to require in zoning and other contracts that stadiums and arenas are located where transit service and stations are already present.

Of course, many communities are so eager to get a team that transit service and station adjacency ends up being, at best, an afterthought. 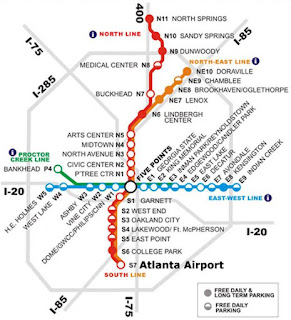 For example, the Atlanta Braves baseball team is moving out of the city to the suburbs, to the Galleria district of Cobb County, located at the intersection of I-285 and I-75, which is an area not served at all by MARTA's heavy rail transit system.

Thanks for the guide. this information help me my store online medicine website How to seo.click it...: https://www.dosepharmacy.com