Focusing on what's most important: snow on cars or snow on sidewalks? 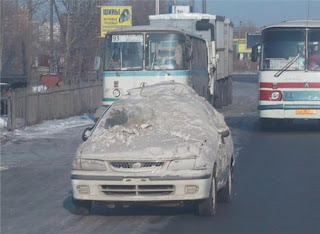 A number of legislators in New York State have introduced bills to institute fines on motor vehicle operators for not clearing snow off their vehicles, and then driving, with the likelihood of the snow flying off their cars.

From the Rochester Democrat & Chronicle article "Snow on car? Some lawmakers want a fine":

At least four separate bills in the state Legislature would hit motorists with a fine if they fail to clear snow and ice off their vehicles before hitting the road, following the lead of New Jersey and Connecticut, which have implemented similar policies.


Supporters of a fine say it would deter motorists from driving their snow-covered cars, which pose a danger to other drivers who could find themselves in the line of flying ice or debris. ...

Mayer's bill is the most comprehensive of the proposals, laying out a system of fines and a fund to provide for areas on the state Thruway where truckers can clean off their vehicles.

Non-commercial motorists would be hit with a fine of $150 to $800 if they are found operating a vehicle with more than 3 inches of snow or ice on it. A trucker would face a $450 to $1,250 fine. Drivers who are disabled wouldn't be subject to a fine.

The money would go into a fund, which would be used to pay for an awareness campaign, the Thruway clean-off spots and grants for trucking companies to purchase ice-clearing equipment.

While I think this initiative does show the priorities of elected officials as it relates to the transportation network amidst the general unwillingness to fine people for not clearing sidewalks ("Despite laws, progress on snow removal is uneven," Washington Post) it happens that the City of Rochester New York independently has a system for clearing sidewalks of snow throughout the city, including in residential areas. (The exclusion of disabled drivers from the requirement defeats the purpose of the bill though, as snow flying off a car happens regardless.) 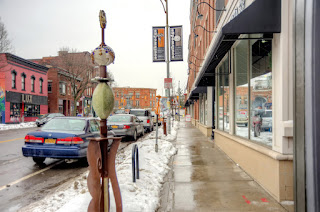 The City of Rochester contracts for sidewalk removal, clearing to a width of 5 feet, but not exceeding that width in commercial districts.  Photo from Rochester Subway blog.

The city clears snow once it gets to 4 inches--so property owners are responsible for clearing snowfalls of less than 4 inches--and has 878 miles of sidewalks. They organize clearance by creating sidewalk snow clearance routes each 15 miles long and say it takes about 5 hours to clear each route.

The cost is covered by what the city calls an "embellishment fee," which is an add-on to property taxes, and is based on the width of the street frontage.

Although some argue that the program doesn't go far enough and should provide additional clearance to the full width of the sidewalk to the curb in commercial districts and the application of special clearance practices for bus stops ("Clearing Rochester’s Sidewalks of Snow is Not a Problem, It’s an Opportunity," Rochester Subway blog).

Note that inadequate dew removal from a car's windshield contributed to the death of a bicyclist in Maryland in 2011 ("Motorist cited in bicycle fatality: Hollywood woman's ticket charges negligent driving," Southern Maryland News). That driver ended up paying a fine around $300.  The consequences from causing death can be pretty cheap.

Commercial snow removal is very important for many people. Although most residential owners believe it's an expensive service that's generally geared more towards
commercial businesses, they are actually quite beneficial when considering the responsibility everyone has to keep others safe throughout the winter season.
see more at-commercial snow removal massachusetts

dear,
all mens/womens
Selecting the right sexual enhancement products can be a highly difficult task with so many options right in front of us.
Take a look at for more: Biomanix reviews

Some winter seasons are pleasant and mild while others can be cold, harsh and overall difficult to deal with, especially when having to shovel snow from a property.
Most people choose to hire commercial snow removal professionals to take care of the work since they are experts in the field, offer a guarantee of good service and
are equipped with all of the things needed to get the job done well.Read more at-commercial snow removal massachusetts

Hello
I am going to share on the following-The winter season brings many different things, some good and others that are perhaps more of a nuisance than anything. When the snow piles up high, there comes the choice of either struggling to get rid of it with a snow blower or to hire a professional commercial snow removal team to take care of it instead.Read more at-commercial snow removal massachusetts
Regards
Helson

Hello
I am going to share on the following-The winter season brings many different things, some good and others that are perhaps more of a nuisance than anything. When the snow piles up high, there comes the choice of either struggling to get rid of it with a snow blower or to hire a professional commercial snow removal team to take care of it instead.Read more at-commercial snow removal massachusetts
Regards
Jenifer lopez

Tired of handing your hard earned money over to contractors for your home improvement projects? This time do it yourself and save some money!
see more at : commercial snow removal massachusetts