Historic preservation designation as a tool to prevent development

A lot of the time, pro-development forces criticize historic preservation designation as a way to stymie "progress" or change.

And I don't think that helps historic preservation as a movement or a process.  It needs to be able to stand on its merits as a heritage conservation and community improvement strategy, not as a cudgel.

That being said, oftentimes progress is in the eye of the beholder, and it can be an acceptable even worthy tradeoff to protect buildings and landscapes even at the loss of some development potential.

Therefore, it's important to be very judicious when moving proposals for the creation of historic districts and landmark designations forward.

DC has a very strong preservation law, stronger than just about anywhere else.  The preservation law is strong, but it sets a high bar for designation, basing decisions on various architectural and historical criteria.  It also puts in barriers and provides communities very little support when pursuing designation.

And because so many of the city's buildings were constructed before 1920, especially neighborhoods, I argue that even without historic designation, there should be basic design review guidelines and demolition protections in place, because architecture and history are central to DC's identity and competitive advantage, even if this is "a fact" that eludes most of the city's appointed and elected officials. 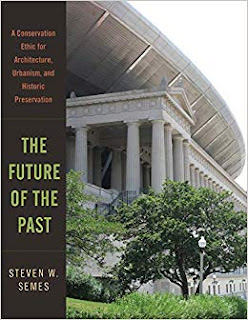 My basic point about this is that the historic preservation movement came of age when housing choice trends and attitudes did not favor cities, and residents committed to urban living focused on stabilizing neighborhoods, commercial districts, and downtowns in the face of residential outmigration and shrinkage.

Now that center cities have an opportunity to grow, preservationists lack the philosophy and tools to respond.  Cf. my discussion of Stephen Semes, author of The Future of the Past: A Conservation Ethic for Architecture, Urbanism and Historic Preservation, in "An argument for the aesthetic quality of the ensemble: special design guidelines are required for DC's avenues."

I also argue for managing the city's built environment as if it were a whole city heritage area.  But that doesn't mean preserving the city in amber.

1.  Plaza West Apartments, 307 K Street NW.  The CityLab  2019 confab of international mayors just held in DC from Sunday to Tuesday featured a session on DC's Plaza West affordable housing development, which is noteworthy because a majority of units were earmarked for "grandfamilies," family households led by grandparents who for whatever reason are forced to take care of their grandchildren because the children's parents are unable ("District Breaks Ground on Affordable-Housing Development for Families Headed by Grandparents," Washington City Paper). 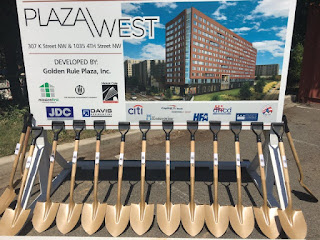 Plaza West bumps against I-395, between K Street and New York Avenue.  In part, in replaced a handful of very simple rowhouses and a couple commercial buildings on K Street.

It comes to mind because years ago someone living in one of the rowhouses contacted me to help him file a historic landmark nomination as a way to stymie the property owner for a bit, but really with the aim of getting a bigger payoff to leave.

I told him since a designation wouldn't be approved and wasn't necessarily worthy in terms of what a designation "could save"*, it would be a waste of my time, even if he paid me.

* even if the buildings were designated, which is unlikely, because individual houses don't meet the criteria to be designated a landmark, unless associated with particularly noteworthy events, individuals, or architecture, they can still be demolished in extraordinary circumstances through a court-like special review process through what is called "the Mayor's Agent" for Historic Preservation, who is an administrative law judge.

And even though I don't think the architectural design for Plaza West is noteworthy, the planner side of me sees that the net benefit from the demolition of a few ordinary rowhouses housing a handful of people is much greater by the replacement of these dwellings and buildings with 173 affordable housing units housing 500+ people. 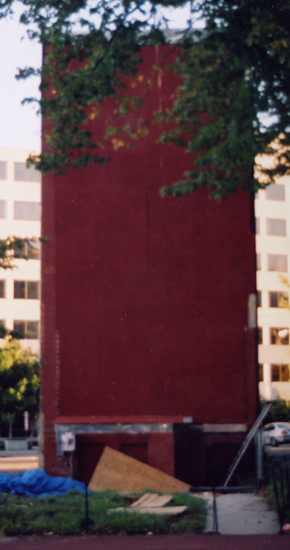 439 Massachusetts Avenue NW, after the facade was torn off, 2005.  Photo by Peter Sefton.

2.  Tearing off building facades to diminish architectural integrity.  To prevent successful designations, the DC land use bar figured out that if they had their clients tear off the facades of buildings, the loss of integrity would be so great that a historic designation could not be made.  That happened to a bunch of buildings on Massachusetts Avenue NW.

3.  Another good example is the MLK Library.  Because the building is designated, it basically crippled DC's ability to create a great library, instead of one that is merely better than the library that is more like an office building than a library.

Note that even though I lauded advocate efforts for "saving the library" out of a lack of trust that the city would do a better job ("The essentiality of determined advocates ignored in Post editorial on the Martin Luther King Library," 2015), I still think that designating the building was a mistake.

It raises a tough issue in preservation policy, in that is a building important and worth landmarking and saving because it's in your community, even if overall, it is not a particularly noteworthy example of the architect's ouevre?

Personally, were I in charge of the library system, I'd probably push for demolition, and go through the Mayor's Agent appeal process. 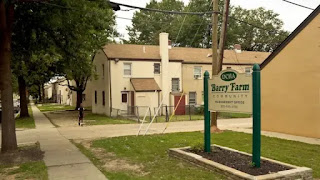 Barry Farm in better days.  It's absolutely decrepit now, not that disinvestment is a justification for demolition if a property is deemed worthy of historic designation.

4.  And Barry Farm, a public housing development in Southeast that the city has been trying to redevelop for years, but a small group of residents continue to resist.

The hearing where the decision will come down concerning that historic preservation nomination is tomorrow ("Barry Farm tenants await decision," StreetSense; "Is Barry Farm a historic landmark? An upcoming ruling will shape the fate of redevelopment plans," Washington Business Journal. 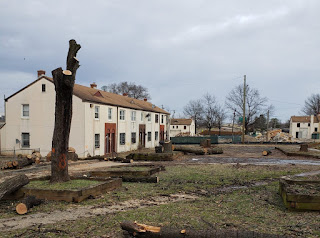 From a tradeoff perspective, I think the significant increase in the amount of housing that will be provided by the new project is a great return on the change.

Again, the design doesn't appeal to me.  But the proposed project sounds very similar to projects elsewhere that are heralded for their contribution to neighborhood improvement and an increase in the amount of housing stock .

From the StreetSense article:


DCHA, along with the A&R companies and Preservation of Affordable Housing Inc., intends to turn the public housing community into a mixed-income area. The plan aims to increase the total number of units from 444 to 1100, while providing 380 units as public housing, according to the Barry Farm Redevelopment website. The project will also include approximately 40,000 square feet of retail space, a 2.4 acre park, and updates to infrastructure.

OTOH, given that "lived experience" is all the rage these days, you can argue that Barry Farm is deserving because people (cf. People's History of the United States) and people of color especially are under-recognized from the standpoint of historiography centered around "Great (white) men."

In any case, based on diminished architectural integrity and lack of particularly noteworthy characteristics, I can't imagine that the nomination for the complex will be approved.

"Therefore, it's important to be very judicious when moving proposals for the creation of historic districts and landmark designations forward."

Yeah, that would be nice. But it would help to stop telling people that if they lived in a historic district [bad development thing] wouldn't happen. As far as I'm concerned history has been prostituted for far too long serving NIMBY needs.

I always would say it's a way for residents to have a say in what happens, when in normal circumstances building regulations don't provide such opportunities as a matter of course.

My mentor called it a process for managing change.

But wrt "what you said", the new building at 11th and Pennsylvania Avenue SE where Frager's Hardware was is butt ugly.

And Capitol Hill Historic District is amongst the most "organized" of all historic districts.

Our Professional Medicine Essay Writers work tirelessly to ensure that your Medicine Research Paper Writing is completed within the time frame given to avoid poor scores in your Medical Essay Assignments Writing.