Revisiting free transit in the wake of the decision in Kansas City ... and Lawrence, Massachusetts

There are many examples of free transit, but it is still relatively rare.

The biggest example heretofore is Talinn, Estonia, which is a little smaller than Kansas City, Missouri, but definitely smaller than the metropolitan area there.

Many resort communities have free transit.

In 2018, Luxembourg announced it is moving to a free transit paradigm ("Luxembourg to become first country to make all public transport free," Guardian).

And some cities in Germany are considering it, as an air quality measure ("Germany considering free public transportation to take on air pollution," Die Welt).

Green New Deal/Climate Change.  From a "knock your socks off sense of urgency" a la the Green New Deal, making transit free so that people will choose transit instead of driving makes sense.

But is the impact significant?  But if your transit system isn't particularly robust in terms of where it goes and how frequently, does it matter if it's free?  The KC bus system has just under 50,000 daily riders, and about one third of that on weekends.  The Metrobus system in DC and the suburbs has 500,000 daily riders, and this is complemented by other jurisdictional bus services, subway and train service.

Yes, transit can't satisfy every possible trip, but many trips are well suited for transit, especially when complemented by walking, biking and concentrated land uses.

And the physics of transportation make it impossible for every trip to be satisfied by the use of a 100 s.f. box.  There isn't enough road space to handle all the trips.

WRT DC, I have written about the possibilities of free transit, in response to proposals for free transit as well as the tug of war between the Executive and Legislative branches over whether or not the Circulator buses should be free (the short line streetcar is free, but only travels a short distance on one street).

-- "Is making surface transit free the best transit investment DC can make?," 2016
-- "Revisiting "Should surface transit be free?" given DC's announcement the Circulator bus service will be free," 2019

Cost is an issue, but mostly for the poor.  Cost is an issue for people of limited means, but for others, cost isn't the primary reason most people don't use transit.  (Although Metrorail fares + parking costs from far distances are high, and can't compete against the cost of gas if free parking is provided, especially for multiple riders.)

With limited funds, how should transit monies be spent: is free transit the best choice?

At this point, rather than making all transit free, especially in communities with relatively minimal ridership, I'd rather focus on:

It's been a number of yeas since I've written one of my "master transportation wish list" pieces:

and I don't feel the need to do another one given newer pieces that are more focused on particular elements of the transit network such as:

-- "Revisiting the Purple Line (series) and a more complete program of complementary improvements to the transit network," 2019
-- "A "Transformational Projects Action Plan" for a statewide passenger railroad program in Maryland," 2019
-- "Reviving DC area bus service: and a counterpoint to the recent Washington City Paper article," 2019
-- "The answer is: Create a single multi-state/regional multi-modal transit planning, management, and operations authority association," 2017
-- " Using the Silver Line as the priming event, what would a transit network improvement program look like for NoVA?," 2015

But transit expansion and increased frequency is a big issue. 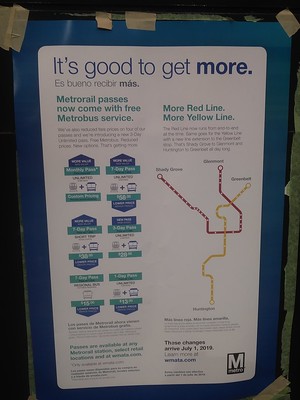 That being said, reducing fares is a reasonable goal.  Metrorail fares are high.  Although in the last couple years, WMATA, forced to respond to a precipitous drop in ridership, has created a goodly number of cost competitive transit pass products.

Low income monthly passes.  Other communities, such as San Francisco and Seattle, have low priced monthly transit passes for low income riders.  NYC has recently introduced such a program.

In the DC area many jurisdictions, including DC and Montgomery and Arlington Counties, have discounted or free fare programs for youth, but not for low income residents.

Lawrence, Massachusetts: free intra-city shuttles.  Lawrence is a distressed city that once had been an industrial powerhouse.  In the last decade it went through financial exigency but now is stabilizing.

A woman boards the Route 34 MVRTA bus in Lawrence.NIC ANTAYA FOR THE BOSTON GLOBE

Now that the city has some budget surplus money, they've put a bit of it into making intra-city shuttle bus service free ("'Just make it free': Lawrence paid all the fares for three bus routes, and ridership is up," Boston Globe).

It's not rocket science.  Tempe, Arizona has done this for decades.  And mostly for transportation demand management purposes, many resort communities, like Park City, Utah, have free transit.

Bus fare capping for low income riders.  The BG article on Lawrence makes the point that the regional transit system has a low price for the month, but because low income residents often don't have the full amount to buy a pass at the beginning of the month, they still pay on a per fare basis.  From the article:


But even though [a Merrimack Valley Regional Transit Authority] monthly pass is much less expensive than an MBTA pass — $30 compared to about $80 for a full fare — many here struggle to come up with enough money to pay for the pass at the beginning of the month and end up paying cash for each ride.

But "capping" processes can be built into the software behind transit fare card technology.  In such cases, it tracks and increment each payment, and once the cost of the pass has been reached (on a daily, weekly or monthly basis) additional per fare costs aren't charged ("Cities that have transit fare capping have fairer fares, Steven Vance).

London and Melbourne do this, but not necessarily for low income fare pass products.


People with steady jobs and good paycheques are the most likely to buy a monthly pass. They have cash on hand at the beginning of the month.

Those who might need their last nickel just to keep the lights on are the most likely to pay cash for every trip. It means they pay $3.25 per ride, more money for the same service.

That’s one reason Ken Koropeski is excited about Smart Fare.

With a card and an online account, the system can track how many times a person uses transit during a 30-day period, said Koropeski, director of special projects for Edmonton Transit. No one would have to commit to a monthly pass on Day 1. Instead, the system could automatically track use and once the rider hits that monthly maximum, all other rides are free.

“When you have capping, it has inherent benefits for people with low income,” said Koropeski.

Fareless square.  Portland was known widely for its "fareless square"--where transit service was free in the Downtown core.  This was done as a transportation demand management measure, but also was helpful for low income riders.  The service was discontinued after the 2008 recession.

Shuttle systems.  Some cities have free bus systems that complement regional services that aren't free.  The example with which I am most familiar is Tempe, Arizona.  Other cities in the Phoenix area have created similar services.  Mentioned above is the new service in Lawrence ("Lawrence will pay to make 3 local bus routes free," Boston Globe).

There can be a problem with the creation of what I call free "political" bus services, shuttles and circulators serving particular areas,  But when these routes have relatively low ridership, it raises the question of whether money being spent on transit service can be better used ("Methodology for determining transit expansion")

Specific free services.  There are many examples, especially "circulators" usually in the core of a center city.  Circulators are fixed routes.

UTA in Salt Lake City provides a free shuttle from the Downtown free transit zone to the nearby State Capitol.

Some cities in the Metrolink commuter rail service area provide free or discounted shuttle service between train stations and major destinations.  Other train systems may have similar services such as in the Greater New York region.

I am not familiar with many such services within subway and light rail systems.  I think such a service should be developed in association with the forthcoming Purple Line light rail in Suburban Maryland.

it cites a TCRP report _Implementation and Outcomes of Fare-Free Transit Systems_.

Findings are that demand increases but the system can't meet demand so there is overcrowding and other problems, and says free transit isn't a priority.

Pass programs for UTA (Utah) include discounted passes by city, as well as cards charged at 1/4 of the price, sold to human service organizations, for giving out to their clients.

Articles on the low income passes: