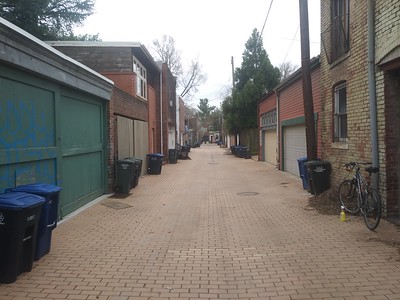 I have been interested in this for a long time, have written a lot about it, and believe that a targeted support program could create a many thousands of units in neighborhoods where back lots are deep (ours is 90 feet long), ideally targeting areas within one half mile of a Metrorail station.

Neighborhoods like Capitol Hill and Georgetown are known for both "English basements" and carriage houses, which often are rented out.

DC has changed the rules to make it somewhat easier, but there are still various constraints. But it's not cheap.  It would cost at least $150,000 to $250,000 to construct, plus permitting etc.  It turns out that having "free land" doesn't make construction of such a dwelling unit much cheaper. 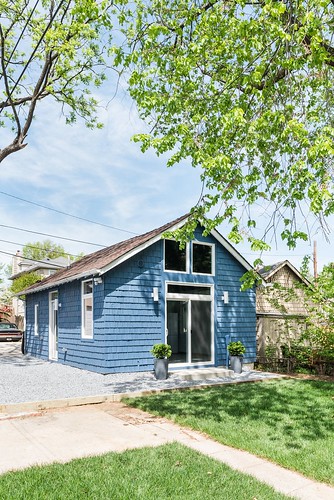 Image by architect Ileana Schinder from profile in Dwell Magazine.

An article ("Enduring less ado with an ADU") last week in the Washington Post shocked me though, because an ADU in the 16th Street Heights neighborhood (somewhat more than one mile away from our house, but nowhere near a Metrorail station) is renting for $1,975/month.


They also incorporated a rehabilitation loan for $150,000 to cover the cost of converting the two-car garage into a 500-square-foot, one-bedroom rental unit. The couple imagined a hip space in the alley, but having to stay within the limitations of the existing garage put a stop to that idea. ...

Free-standing ADUs are subject to the same building codes and zoning regulations as a full-sized house. Conversely, they do not have their own address and are not deeded separately. They cannot be bought, sold or gambled away. ...

Before the project was complete Fazio ran ads on Craigslist and Reddit using Schinder’s renderings to showcase the space. “We had a dozen people interested in the first week,” Fazio says. The selected tenant is now in place and paying $1,975 a month. Fazio says the rent is “as high as anybody is paying for a one-bedroom in this neighborhood.”

That level of rent--albeit not priced as "affordable housing"--makes putting in such a unit financially efficacious.

But on the Columbia Heights e-list, one correspondent derided ADUs as anything but affordable.  My response was:


"if you have to get a loan to build the unit, the add on to the mortgage payment will be at least $1,000 and the construction cost will be financed privately."

If you want to offer these as lower cost rental units, they'd have to be subsidized by at least half the cost. 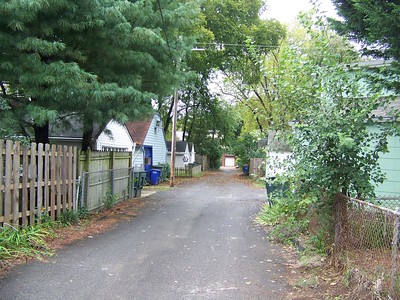 Potentially convertible garages to the rear of the 4400 block of River Road NW in Greater Friendship Heights.

Then again, it could well be worth it, as the production of one unit of housing would be 25% or less compared to the cost of traditional construction of a single unit of affordable housing.  OTOH, such a unit wouldn't be permanently affordable.

Parking still required.  One hindrance is that you can't convert a garage without replacing the otherwise foregone parking.  That requirement should be reconsidered, especially within one-half mile catchment areas of transit stations, at least in typical detached housing zoning districts.  In rowhouse districts it should vary, maybe, but definitely shouldn't be required in areas close to transit stations.

That's why in the photo above, there's a parking pad next to the building.  Although other photos in the article show that they repurpose the space more frequently as a patio.

Re parking, as far as I can see there is no specification about conserving parking in the ADU regs in the 2016 zoning code. Is that requirement given elsewhere? Anecdotally, in any case, at least in my northern Ward 4 neighborhood 80% of households do not use their '20s-era garages for parking in any case, because most are too small for modern vehicles.

I saw it somewhere, which shook me to the core...

Yes, like the garages you reference, our garage is "too small" for most current cars, at least for two spaces.

I suppose you could fit one car in the middle (but maybe not a tall SUV). But we haven't owned a car for as long as we've had the house (since 2008). Most people on the block park on the street, but a couple of houses do utilize their rear parking (mostly pads).

I will try to run it down with Ileana Schinder and I'll let you know.

===
FWIW, when we got the house, we were never given a key to the garage lock (which was painted over). It was only last summer that I got it rekeyed. It's kinda cool and fun to have a protected garage now. Before I just kept stuff in it that wasn't of value. But to my knowledge we never had anything taken.

When a garage was converted to an ADU in the Cleveland Park Historic District, almost immediately after the 2016 code came into place, parking never came up in discussions at all and it's hard to believe it would not have, CP being CP.

But historic districts have different "requirements" for parking. Generally, changes don't trigger requirements for on-site parking, the way they do in the rest of the zoning code.

In any case, here's the relevant part of the zoning code.

I now own a business of my own with the help of Elegantloanfirm with a loan of $900,000.00 USD. at 2% rate charges, at first i taught with was all a joke until my loan request was  process under five working days and my requested funds was transfer to me. am now a proud owner of a large business with 15 staffs working under me. All thanks to the loan officer Russ Harry he is a God sent, you can contact them to improve your business on.. email-- Elegantloanfirm@hotmail.com.