Reprint: Now I know why Boulder's Pearl Street Mall is the exception that proves the rule about the failures of pedestrian malls 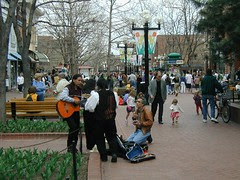 In most instances across the U.S., pedestrian-only malls have been proven to be ineffective, and have been retrofitted to bring back automobiles as part of the mobility mix. That doesn't stop people from continuing to suggest them.

The problem with exclusively pedestrian streets is that sculptures and plants usually aren't enough to animate spaces if there aren't enough people present. And in the automobile-centric places that typify U.S. communities, few cities have enough population to begin with not to mention population present walking around on downtown streets to make a pedestrian mall work. Exceptions seem to be college towns like Charlottesville or Boulder, which have a nearby student population that is large, and more likely to walk than to drive (and less likely to own a car as well).

I've mentioned in the past that there was an excellent case study about Boulder in the Main Street News publication, which has been reprinted in the book Marketing an Image for Main Street. This book is highly recommended to Main Street committee chairs and board members even more than the original Downtown Revitalization Handbook--as the former is better written and perhaps more to the point about what a commercial district revitalization program is trying to accomplish.

Getting back to the case study, knowing that a new mall would be opening and competing with Pearl Street, in the past few years the Pearl Street Mall BID conducted a variety of surveys and market studies to better determine the origins of their customers, finding for example that 35% of the customers live in the Denver-Boulder metropolitan area, and they come a few times/year, in large part because of the distinctive stores (indepndents for the most part, not chains) and the quality public spaces and street experiences (!!!!! -- note to people who are calling for more homogeneous experiences, that such diminishes the unique selling proposition that cities possess in goodly amounts -- unique experiences).

This helped the Boulder downtown commercial district better focus on strengthening their advantages, rather than becoming more diffuse.

Today, the Pearl Street Mall and the rest of downtown Boulder are one of the most important districts in the city, not just for the sales taxes generated but for what Foy and other experts refer to as “sense of place.” 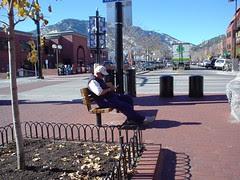 The view from Pearl Street. Photo by Lars Erik Finanger.

Foy, whose Boulder firm was instrumental in the design of the mall, said it’s important for any community seeking to reinvigorate a downtown to “find emotional triggers.” On Pearl Street, one of those triggers is the scenery...

The architecture and tenant mix, especially the independent businesses, are two more of those emotional triggers, said Bolduc. Old Chicago, which had its first location on Pearl Street, has since grown into a strong, multi-state chain. But chain stores and restaurants do not dominate Boulder’s downtown, despite what people might think. 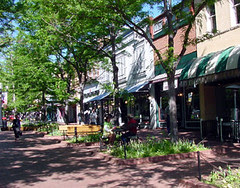 In fact, 75 percent of the downtown area’s businesses are independent, according to Jane Jenkins of the Downtown Boulder Business Improvement District. “I think that is a misconception, and interestingly enough many of the stores that have closed down have been the chain stores,” she said.“... “When you walk around here it’s almost strange to see a chain here anymore,” said Bolduc. “And the ones you do see you don’t even recognize as chains. They might be smaller, regional chains.” ...

John Schopbach, owner of Weekends... believes chains are helpful to a district like downtown Boulder because familiar names indicate success to out- of-town visitors, making them more inclined to trust adjacent locally owned stores. “We need those names and we need that recognition for clothes shopping,” Schopbach said. “It needs to be a place to shop and not just a place to hang out.”

He also said it takes more than just having a presence downtown or on Pearl Street, to guarantee success. “You can’t just open up down here and expect to do a lot of business just because the Pearl Street Mall gives you a lot of traffic,” Schopbach said. “You’ve got to do a good job.” The vacancy rate for retail spots in downtown Boulder is about 5 percent, Jenkins said, with lease rates running the gamut but averaging somewhere in the mid-$30s per square foot. “I think that you have to have a good mix of local versus national, and I think in downtown Boulder we have exactly the right mix,” she said...
________
Note: these lease rates in a very successful commercial district are what property owners are asking for space in marginal commercial districts in Washington, DC
________
Fundamental success factors

“We have short blocks; we only did four (blocks, for the pedestrian mall),” she said. “And also, they let the north-south streets go through the mall. To me, that was the most critical thing that they did.” She added that having “interactive” elements on every block, such as street performers, boulders to climb or sit on and sculptures, makes for a lively experience for visitors. And for any downtown, the perception of success is critical. In Boulder’s case, building owners on the Pearl Street Mall have been encouraged to find retailers to lease their ground-floor [retail] storefronts. 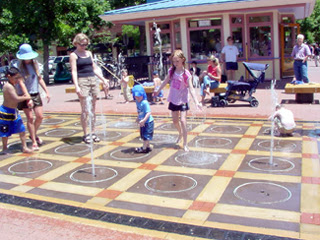 Firms like Foy’s, and plenty of other service-oriented businesses like law offices and accountants, are located throughout the downtown, but they’re not on the ground floor, at least not on the pedestrian mall.

So, visitors who walk the mall after hours or on the weekends are not greeted with open businesses alternating with dark storefronts and “closed” signs. 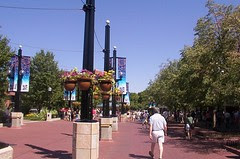 Clearly, there are reasons that the Pearl Street "pedestrian" Mall is wildly successful. They work their a**** off to ensure that it succeeds, leaving little to chance. Impressive.