Richard's Rules are based on the premise that in commercial districts that are under-patronized successful restaurants rely on frequent visits by a (relatively) great number of people, mostly from around your neighborhood, at least at the beginning. Examples from Capitol Hill include La Lomita and Banana Cafe. These restaurants helped seed their areas, and provided first phase commercial district revitalization energy to their respective areas. Now, a newer phase of more upscale restaurant options has come to Capitol Hill, which face it, had a bunch of restaurants, but most weren't "great." Now it has Montmarte, Cucina Meditalia, Jordan's 8 (site of a fundraiser for Councilmember Kwame Brown tonight), Starfish, Tapatini's, Sonoma, and others in the pipeline.

A good example of a similar failure to the restaurant on Georgia Avenue was H Street's Phish Tea. Its high prices, the relatively paltry number of entrees, and specialized cuisine (I love Caribbean food myself but typical DC restaurant-goers don't consume this type of cuisine all that frequently) meant that there were relatively few customers. And certainly their terrible service (time to receive entrees, quality of service) meant that few customers would ever come back. 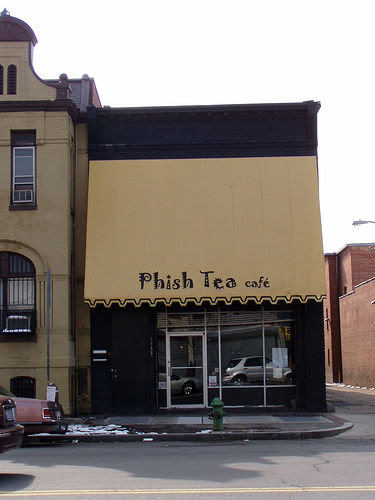 Phish Tea went into a death spiral, costing upwards of $1 million in losses, when you consider the more than one year of unpaid rent. This didn't help H Street's revitalization at the time. If it weren't for Joe Englert's initiative of seeding H Street with tavern-entertainment destinations offering pretty good food, as attested to by the Post piece cited above, I believe that H Street's revitalization would still be sputtering.

1. Relatively appealing cuisine that isn't too specialized (or at the very least is popular such as Asian food); food that is attractive to a large number of people--Italian, Mexican, and "American," seem to work best. You want at least 100 customers/nite. These days Thai food is moving into this category. Chinese seems to have lost its appeal. Restaurants like Indian, Caribbean, etc. are just a bit too specialized, and therefore don't get the weekly or at least a couple times/month patronage that such restaurants need especially when they are located in emerging commercial districts.

4. Competitively priced; you can't have drinks at $8 or most of your entrees costing $13-$20 -- unless you offer a fully realized concept where those prices make sense. If your prices aren't competitive and maybe a little less expensive than the market, you won't get that frequent patronage that is necessary for your success. Pitchers of margaritas or sangria are good, maybe not pitchers of beer, which seem to attract a rowdier more alcohol-centered clientele.

5. Nice interior; it doesn't have to be stunning or a $1 million interior renovation, but it can't be threadbare, and it has to be appealing. 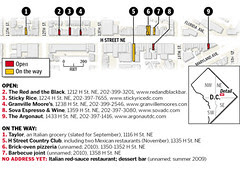 Joe Englert's focus on building a critical mass of eating-drinking-entertainment establishments has accelerated improvement on the H Street corridor by at least 5-7 years. And these efforts, by bringing people to the corridor, make it more possible to develop retail in later phases. (Although high rents do make this difficult.)

Unfortunately, the article was a little too focused on "the Atlas District," as there are other establishments, not owned or affiliated with Joe Englert, on the 1000 and 1100 block including the H Street Martini Lounge, a club called 12 (who knows how long it will last), and Napa 1015. A Tropicana sit-down restaurant is also opening on the 1000 block (I know, Caribbean food), and there is an Ethiopian coffee shop (see "Making It: Ethiopian Immigrants Create Community With Coffee" from the Post) and a neighborhood bar, Pap & Petey's, on the 400 block.