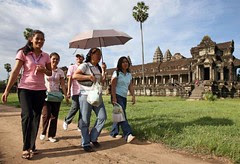 Angkor Wat temple, Siem Reap: The ancient stones at the temples are being slowly worn away by millions of flip-flops and walking boots. AFP photo.

Separately from what individual countries do, UNESCO (a commission of the UN) has a program that designates world heritage sites. The Independent (London) has a story on the process. The article, "Is Unesco damaging the world's treasures?," is critical, but what really can a world body with no enforcement powers and limited funds to provide to preserve heritage sites which are often located in nations that are extremely impoverished with many pressing needs, some of which are life and death matters which supercede concern oftentimes for the preservation of heritage.

Here are the last two paragraphs of the article:

Morgan says Unesco is woefully under-funded, but that the entire heritage industry lacks cash. "If you add up the funds available to the main players in preservation, you're looking at $100m a year. It's pretty abysmal if you compare that to nature conservation, where you're talking billions." Until balance is restored, Morgan insists Unesco could direct funds to more worthy places by ditching what he calls a bias for religious buildings and glamorous sites in the developed world. "Do we really need another cathedral preserved?" he asks. "I'm not worried about Stonehenge or Dresden when you look at the hundreds of major sites in poor countries that are deteriorating to the point of non-existence."

Morgan ends with a "school report" for Unesco. "Their mission is in three parts," he says. "First, they manage the list, for which they get a B-plus – there are some weird sites but they do a pretty good job. Then they monitor and enforce. I'll give them a B for monitoring, but a D for enforcement because they have no teeth. Finally, they preserve, which you can't even score them for because they have no money. The bottom line is that you need a strong network of conservation groups, led by Unesco, to provide a safety net for the most endangered sites in the countries with the least resources." Unless Unesco pulls up its socks, the price of failure could be more damaging to the cause of world heritage than the bombs that battered Dubrovnik.

I was thinking about this because I have an email about how fortunate preservation is because in the next federal budget, President Obama proposes about a 10% increase in funds, to about $46 million, for the Federal Historic Preservation Fund. You could spend all that money in one state, let alone 50 states + the territories (including DC). It's a small amount of money targeting big needs.

Another problem discussed in the Independent article is the impact of tourism on world heritage sites. This is a problem in many places. For example, see "Venice tourism squeezes out residents" from BBC.