Nibbling the sidewalk in favor of cars in Mount Vernon Triangle 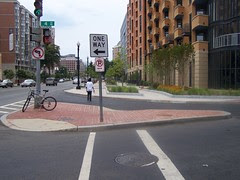 ------------
Update: my faulty memory has been corrected in a sub-thread on Greater Greater Washington. Paul stated that:

The slip lane has been there for years. DDOT has a plan to widen this segment of Fourth Street, between Mass and L Street, to change from one way to two way traffic flow. When the upgrade is executed the slip lane will go away.

It turns out he's right. My memory was faulty.

Still, in advance of a street widening, DDOT could have eliminated the right turn lane. After all, they repaved it, which seems like a waste if it's to be eliminated in the future anyway.

I noticed the other day that at the northwest corner of 4th Street and Massachusetts Avenue NW, DDOT cut a right turn lane into what had been a very wide sidewalk area. This allows a right turn without having to stop at the light. However, the amount of traffic on this road is extremely minimal and the focus on moving traffic at the expense of a quality streetscape seems to be the wrong decision choice.

Ah, I think I figured it out, although I still disagree with the decision. As the two new big buildings--one an office building, the other condominiums/apartments--become utilized, traffic will increase and this continuous right turn lane preferences drivers. The parking garage for the apartment building is entered/exited from 4th Street.

I still don't like it. Better to have added the lane at the intersection, rather than creating a gap between the sidewalk/walkway areas. 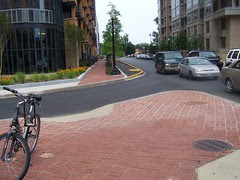