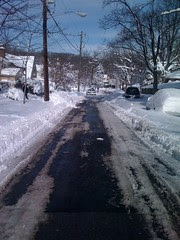 Mayor Fenty's street after snow clearing
Originally uploaded by rllayman
This image seems to have many listservs worked up. I don't see what the big deal is. First, the snow clearing isn't that much better than the snow clearing on my street (which, granted, is a key street that the police department uses to get from one part of Ward 4 to another). Second, it's reasonable to ensure that the street of the city's chief executive is passable.

When I was a child living in the City of Detroit, down the street maybe one block or so lived our Congresswoman (Martha Griffiths). So even at the age of 7, I understood why our street enjoyed particularly good snow removal service on the part of the municipal government.

There is so much anger and animus in advocacy circles that logic gets thrown out the window. It's no wonder it is so difficult to move the city forward, whether or not we are two cities, one rich and the other poor (see Colbert King's column "Our racially divided city" from the Post).

We are one city when it comes to piss poor organizing and lack of coherent ideas, minimal vision, and the embrace of mediocrity--high quality services from the DC Dept. of Public Works notwithstanding.

It's a wonder we get anywhere.

WRT the snow, my biggest complaint is the failure to deliver the Washington Post, so I have been walking up to the 7-11 to buy copies each day (yesterday one copy also for my next door neighbor). Back when I delivered newspapers as a teen and in college, I only missed one day of delivery myself, and that was when papers (the Detroit Free Press) were never delivered to me.

And the other is transit. I think we need to have a better plan for providing bus-based mobility during bad snowstorms. Otherwise, there are very few ways to get around. 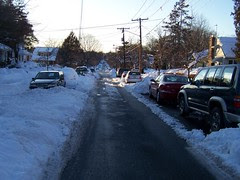 With regard to snow clearing on my street, the above photo shows what it looks like today, although I have not seen one snowplow go by throughout the storm. Just because I didn't see them, didn't mean it didn't happen... 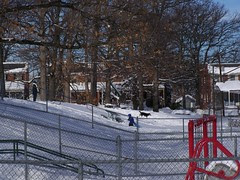 Children and dogs playing at the Takoma Recreation Center (yesterday). 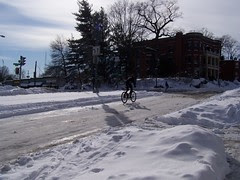 An intrepid bicyclist, yesterday, at Cedar Street and Blair Road NW in Takoma.