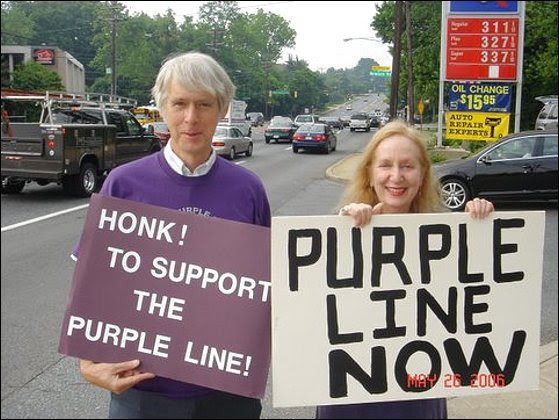 Image from Purple Line Now. Harry Sanders is on the left.

Social and organization change is a very difficult process. Progress is very hard to bring about. And it takes a long time, often decades, for an idea to become reality.

The Washington Post today carried an obituary for Harry Sanders, "Harry Sanders dies; activist led Purple Line campaign‎." (I didn't know him well, but he was at every ACT meeting that I ever attended. And I didn't know he was ill.)

Harry Sanders was one of the founders of Action Committee for Transit, the pro-transit advocacy group in Montgomery County. Their idea for a streetcar between Bethesda and Silver Spring, using the track that once was used to transport coal to a power plant in Georgetown, DC (the plant has since closed and in part has been converted into a hotel), morphed and expanded into the Purple Line light rail proposal, which in its first phase--hopefully the idea which has since been extended into the idea of a circumferential line tying together all the lines, will be extended beyond the current plan for a line from Bethesda Metro Station to New Carrollton Station.

Without his leadership and perseverance, there might not be a Purple Line. Sure, we don't have a Purple Line yet, but it is likely to be approved--an application awaits judgment by the Federal Transit Administration, but the proposal is likely to be the most successful light rail project of any in the United States.

The Purple Line will be, in part, a gift from Harry Sanders to the people of the Washington region, especially transit users in Montgomery and Prince George's County.

It is on the backs of people like Harry that better communities are created.