People in DC are well aware of the issues involved, mostly at subway stations, of the difficulties of trying to add density to leverage the value of the subway location. This has been a long time issue at Brookland, Takoma, to some extent Tenleytown, even at the Hine school site across the street from the Eastern Market Metro Station.

Plus, for the wrong reasons, original opposition to intensification at places like Takoma when the subway system was being planned, ended up being beneficial. Why? Because back then what would have been built would have pretty much been urban renewal styled stuff, like Fort Lincoln on Bladensburg Road, or the various church-related HUD senior housing projects around the city, etc. So, they were "wrong" to fight leveraging at least to some extent the subway location, but right to oppose what would have been bad, neighborhood-vitality-sucking projects.

The first attempt at intensification near the Rhode Island Metro went awry, yielding a typical parking-centric suburban-style shopping center with a Home Depot and a Giant Supermarket, joined eventually by a line of one story retail. Now there is a second project, being built on the parking lot of the Metro station. It will mostly be housing, with some ground floor retail.

Although the argument is not helped when the proposals for development have flaws. That would be the case for proposals for rowhouses with parking at Takoma, the same was originally proposed for Brookland 10+ years ago, and for taking away part of a school site at Tenley. Some of the Hine proposals, and the community desires for green space on the site, were at odds with its decidedly urban and transit-rich location too.

Still, it is generally understood that the investment in high capacity transit needs to be leveraged in a "smart growth" sense. This is the justification for Maryland's plans to develop specific "transit oriented development" projects at 14 rail stations in the state, at subway, railroad, and light rail stations in the Baltimore region, and at subway and railroad stations in Prince George's and Montgomery County. See "State agency to move from Crownsville to P.G. Co." from the Baltimore Sun.

While the site of a community garden by the Marine Barracks in Southeast DC isn't exactly by the subway--it's a few blocks south of the Eastern Market station, and further to the Navy Yard Station, it makes sense to allow the Marine Corps to expand to this site. The gardeners disagree. See "Gardeners near Capitol Hill prepare to repel a Marine Corps invasion" from the Post.

There is a delicate balance between community building and community strengthening. Much of the time gardening, mural, and other community building projects are able to take the opportunity of weak demand and broken neighborhood economies to do projects on properties that aren't otherwise wanted. DC at least in the inner core of the city served by 29 subway stations, isn't that kind of a place.

It's why projects like the Shaw Eco-Village, an attempt to create a green-based community revitalization initiative, failed. The property values were high, and the initiative couldn't remain in place along with normal market forces. (see "Shaw EcoVillage forced to close" from WashCyle). On the other hand, in places like Baltimore, where many neighborhoods languish with hundreds of vacant buildings, such initiatives can succeed.

Still, if you look at the photos in the Post article, the gardeners have accomplished great things. But how does the city continue to grow and maintain its competitiveness in the context of the region and all the other jurisdictions it competes with? 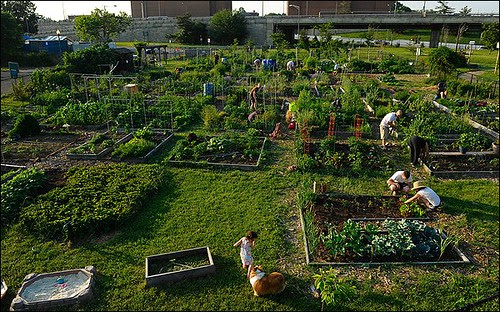 Residents work on their private plots at the Virginia Avenue Community Garden, which is under consideration as a site for a Marine Corps barracks. Photo: Ricky Carioti, The Washington Post.