Without the right transportation planning framework, metropolitan areas are screwed, and that includes the DC area

I wrote a bunch of entries around New Year's sort of summing up my positions on big issues. I still have five or so on my list, which I may or may not write up.

One was about "metropolitan planning organizations" generally, and DC's in particular, the Transportation Planning Board of the Metropolitan Washington Council of Governments.

I can't claim to be an expert on how MPOs work. Some are more powerful than others, and act for the most part, as regional planning organizations. I was gonna mention the MPO in Minneapolis, which also runs the transit system and manages the regional water system, and does regional parks planning (even if parks are run by the counties/City of Minneapolis), and contrast that to the TPB, which has the misfortune of covering an area encompassing three "states" (technically DC is not a state) and a more complicated political, organizational, and spatial environment. (Another example might be the regional government in Portland, Metro, which has responsibilities across multiple jurisdictions.)

Then I was going to include as an example to strive to be more like, the Center for Neighborhood Technology, a nonprofit (not an MPO) engaged in a variety of leading edge planning efforts in the Chicago metropolitan area, on environment and various green initiatives and transportation and community development, as an example of how a metropolitan planning organization could be more innovative and expansive in their role as leading metropolitan best practice land use, environment, energy, and transportation planning.

This comes up in the context of leading edge transportation (and land use and environmental) planning in the DC Metropolitan area, and that we aren't doing it. Or at least, the transportation planners aren't in the front of the pack, when it comes to initiate best practices in transportation planning. I think we can safely assume that the creation of Metrorail was more a happy accident that was the end result of an odd set of circumstances, rather than the beginning of a scalar improvement in metropolitan planning generally and transit planning and operations in particular. 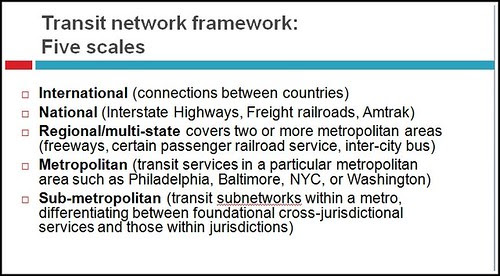 The ideas are based on my observation of how we don't do broad-based transportation planning in the DC Metropolitan area and in response partly to the annual service cuts in response to budget problems by WMATA and the various transit operators. 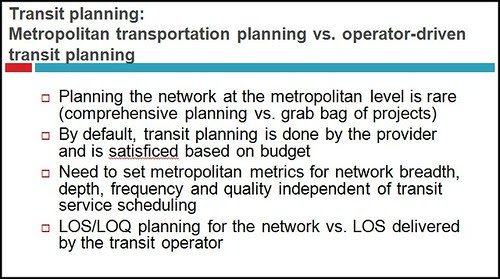 As far as the plan goes, we don't really have a metropolitan plan as much as a list of priority projects, mostly road-related, from the various jurisdictions.
And rather than focus on making transit work better and having more of it in the areas where transit is more likely to be used, instead most of the metropolitan transit system expansion proposals have to do with extending the system outward, making it even more polycentric, rather than intensifying the transit footprint at the core of the region--the Purple line in Prince George's and Montgomery Counties, and streetcar plans in DC and Arlington and Fairfax Counties excepted. 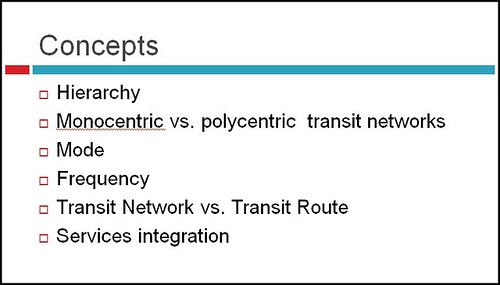 Plus, as I blogged in one of my earlier entries in March 2005, counties like Fairfax County need to not rely so much on Metrorail as much as they need to develop a wide-ranging transportation and transit plan of their own. (Maybe they have by now, I can't keep up.)

BeyondDC has a post on this broad problem, "A whole network is better than one line" in the context of the recent bill put forward by Northern Virginian Congressmen Moran and Connolly to study Metrorail expansion. He writes:

While it’s good news that Northern Virginia’s Congressional representation has an eye towards transit (though Frank Wolf’s absence is notable), the bill is a reminder of the fact that for many people in this region the word “transit” is one-dimensional code for Metrorail. This is unfortunate, because while Metrorail is undeniably great, it isn’t the best solution to every transit problem we face. If we could could make the intellectual jump to accept a more diverse collection of transit modes, we would have the means to provide a better and more comprehensive regional transit network, faster and for less money. ...

The issue is that Metrorail is much, much more expensive to build than other transit modes such as commuter rail, light rail, streetcar, and BRT. Although MetroRail extensions to Woodbridge, Fort Belvoir and Centreville might be wonderful in those individual corridors, for about the same cumulative cost we could put light rail on every major arterial street in Northern Virginia and upgrade all the VRE lines to Metro-like service levels, with trains running frequently all day and on weekends.

Basically, if we were a little more open-minded with modes, we could have a transit system that put rail stations within walking distance of almost everyone in Northern Virginia for about the same cost as a couple of Metrorail extensions.

But I would argue that the post while focusing on the right on point that it's far better to target the right kind of rail investment (streetcar, railroad, heavy rail, light rail) should have more directly discussed the broad problem--the need for planning at the metropolitan level, focused on creating, maintaining, and extending a complete and robust metropolitan transit network.
(Over the years I have discussed all the proposals for extending the Metrorail system in Virginia and Maryland, including in this post, which links to many of the articles in the Post and other newspapers on the subject, "Regional transportation planning and fixed rail service.")
If we were to do true metropolitan-wide transportation (and therefore transit) planning, the specific transit modes take care of themselves, because you are planning for the best possible, most robust total and complete system, not for Metrorail this, or Arlington streetcar that. See the past blog entry for a discussion of the network concept, "Reprint (with editing): The Meta-Regional Transit Network."

And not just on extensions. Note that there are some interesting reports from the Center for Transportation Studies at the University of Minnesota. One report makes the point that the most benefit comes from the first 10 miles of the system, because that area is already likely to be more intensely developed, with the characteristics already in place that support sustainable transportation, ridership, and economic development.
- The Hiawatha Line: Impacts on Land Use and Residential Housing Value (Feb 2010, CTS 10-09)
-Transportation as Catalyst for Community Economic Development (Dec 2007, CTS 07-07)
Would that our Congresspeople learn this, as well as the local and state elected officials across the region. 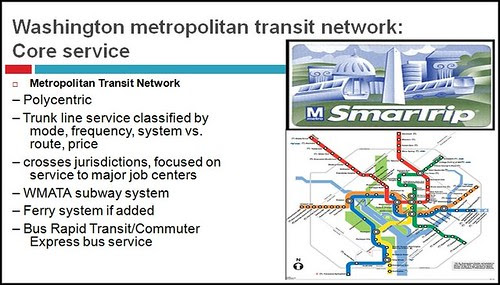 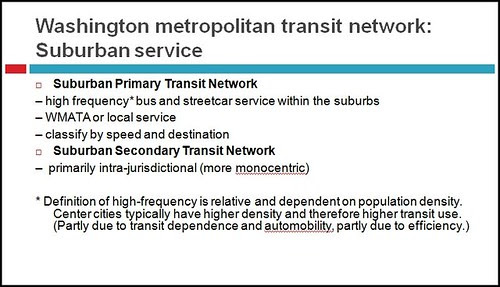 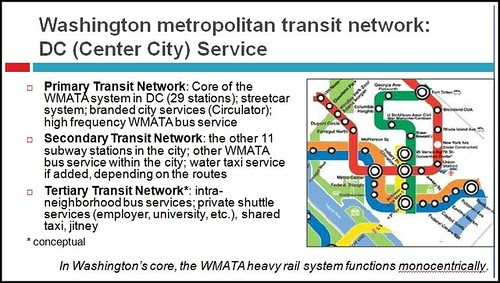