Winn Dixie supermarkets are bringing some of the produce section outside

For years I have argued that urban supermarkets ought to reorient their stores and open certain departments onto the street. Think of how small grocers still do this in Manhattan, Brooklyn, and Queens in New York City. 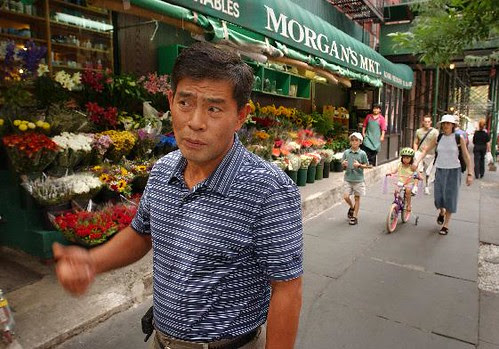 Milwaukee Journal-Sentinel Photo/Mark Hoffman. Gun Soo Youn at his Morgan's Market in Lower Manhattan.
The blog entry "(Urban) Grocery Shopping" covers most of the issues as I see it, as does my op-ed in the Washington Business Journal, "Urban Safeway design misses the mark."
One of the points made is that of all the major supermarket companies, only Whole Foods Market works to market the front entry of the store, featuring produce and in the spring and summer plants and related products. It doesn't realize the promise that I believe is there, but it's a start.
The trade magazine Progressive Grocer reports, in "Winn-Dixie's Awakening," on the southeastern U.S. supermarket company Winn-Dixie. The company has gone through bankruptcy and while at one time had over 1,000 stores, today they have 484. Under the management of Peter Lynch, the firm is working to reorient and reposition to remain competitive in the supermarket business, which is being crushed by Walmart, which now has 25% of the U.S. grocery market. 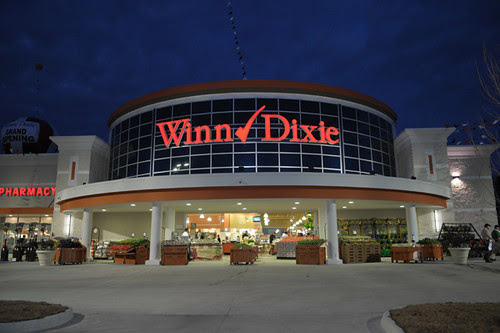 Winn Dixie supermarket entry with produce aisles, Covington, Louisiana. Company photo.
Part of the reorientation includes remodeling current stores and selectively opening new stores. Their new store model places produce at the entry. They've done this in Covington, Louisiana, Margate, Florida (outside Ft. Lauderdale), and in Mobile, Alabama. Only the Mobile store is in the city. The others are suburban locations. The Mobile Press-Register, "Winn-Dixie's remodeled Government Street store to be template for others," and NBC6 in South Florida, "Winn-Dixie Goes High-End in Margate: Wave of the future starts in South Florida for traditional grocery chain" also cover the story. The tv story includes a video, although it only has a brief shot of the entryway.

Now they haven't opened the full front facade to the street in the way that I would do (I was joking that when the Mega Millions lottery was over $300 million, that if I were to win, I'd build the model urban supermarket concept that I have in my head), but this is a recognition of the idea by a traditional supermarket company, which can be further leveraged with other companies.
P.S. I have to admit that it's easier for Winn-Dixie to do this, given that their stores are located in the Southeast, in states like Florida and Alabama and Louisiana.