The USA as a gasoline monoculture 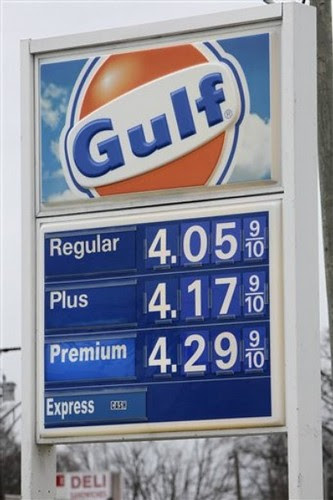 AP photo by Seth Wenig. Gas prices are displayed in Wantagh, N.Y. , Tuesday, April 12, 2011. Gasoline pump prices continue to set new records for this time of year. The national average for a gallon of regular rose 2 cents on Tuesday to $3.79, according to AAA, Wright Express and Oil Price Information Service.

According to the AP article, "Newport, RI offers gas rebate to draw tourists," the Preservation Society of Newport County is offering a $5 rebate on gasoline, for people who buy two tickets ($14.50 to $31.50 each for adults) or a membership, and visit various sites in Providence, Rhode Island.

The fear of rising gasoline prices impacting the economy is shown elsewhere. According to "Rising price of gasoline sparks concern" from the Las Vegas Review-Journal:

Gasoline prices are soaring toward $4 a gallon, a threshold that some analysts say will damage the fragile economic recovery, maybe even in Las Vegas. Higher prices saddle businesses with higher transportation costs that they must swallow or pass along to already strapped customers. As gasoline costs rise, consumers are left with less money to spend elsewhere. And there is evidence that the hike at the pump is beginning to push drivers off the road.

The biggest danger to the local economy would come from Southern California, which has consistently been the home of one-fourth of the visitors, according to annual surveys by the Las Vegas Convention and Visitors Authority. California's average price per gallon for regular gasoline was $4.191 Friday, AAA said in its Daily Fuel Gauge Report.

What is obvious is that the kind of monocultural economy that we have, based on gasoline, is unsustainable and vulnerable to price increases not to mention availability.

So many of the "controversies" we have in planning really come down to building a land use and transportation paradigm that is resilient, one that is less dependent on external inputs.

So the kinds of issues we have with transportation and resource planning right now such as:

• "drill baby drill"
• forces across many states opposed to the development of high speed railroad passenger transportation (what happens when aviation gas spikes up price rise, long term)
• highway and transportation officials who want to build more roads for more cars but not "complete streets" that equally serve pedestrians and bicyclists (as well as transit riders)

are all different pieces of the same unwillingness to build a society and economy that is resilient and robust as opposed to one that is completely dependent on parameters concerning the access to and demand for oil never changing.

As people and as a nation, we are incredible vulnerable--socially, culturally, politically, and economically--as a result.

Monoculture is a term from agriculture, but more generally it is a term describing systems with limited diversity. Certainly, the Irish potato famine is an event from history that demonstrates reliance on one particular food crop can leave a community vulnerable if it fails. (This by the way is a big concern with regard to colony collapse disorder and bees, as bees are essential to the pollination/fertilization of plants, especially vegetables and fruits.)

In economic development, enclave development refers to a similar phenomenon, such as a country that makes most of its income from say copper mining or oil production, and how those operations typically are constructed and operated in a fashion whereby they contribute little to the further development of the local economy.

I use the term from time to time in discussing certain kinds of urban development, such as in this post, "Office Ghettos aren't quality economic development" from 2005, and "Enclave development won't "save" Anacostia" and "Speaking of enclave development (Washington Convention Center)," from 2006.