Are bicyclists their own worst enemy? Uh, no: response to Salon Magazine article

Salon Magazine has a story, "Are urban bicyclists just elite snobs?: As cycling's popularity rises, the cyclists are despised. If riders want to change cities, they need a new attitude," that I disagree with.

The problem with this article is that it looks at this issue as if it were just about bicyclists, when really the issue is the challenge that bicycling [and walking, and transit] makes to automobile-centric mobility paradigms.
Chevrolet's "See the USA in Your Chevrolet" ad campaign was so successful that the song was sold as a single. A 2011 version was done by the cast of the tv show "Glee". I love the "Happy Motoring" tagline used by Esso (now ExxonMobil) in their advertising and promotion programs for most of the 20th Century. Note that the images in this map from 1946 reflect how automobiles were used during the "Recreational Auto Era" (see text below for more explanation).

The challenge to the primacy of the automobile is very uncomfortable for most people who are drivers, because it means for them a loss of privilege, as the past 90 years of transportation policy has privileged automobile use at the expense of walking, transit, and bicycling.
Plus there is the issue of anyone who doesn't drive, in this case the bicyclist, as "the other"--people can understand and deride the poor as unable to drive because they can't afford to buy a car, but people who choose not to drive challenge the system.
I have developed this idea over the years in past blog entries such as "Criminal Bicyclists," "Streets as places versus 'Motordom'," "Societal change (and sustainable transportation),"This gets tiresome: an automobile driver insists that automobiles are efficient users of precious road space while transit vehicles are inefficient," and "Bicyclists as the other (continued)" and "The real "war" on drivers is in Manhattan."
Before the car cities had been designed to optimize walking and that urban form also optimized bicycling and transit, but as the car became more widely deployed, the car instead was privileged at the expense of walking and biking--making roads wider, creating traffic signals, not giving pedestrians the right of way on the road way, gradually increasing the legal speed limits on surface streets to speeds that kill pedestrians when accidents occur, etc.
This general idea is discussed in Peter Muller's paper "Transportation and Urban Growth: The Shaping of the American Metropolis." From the article:

The emerging form and structure of the American metropolis has been traced within a framework of four transportation-related eras. Each successive growth stage is dominated by a particular movement technology and transport-network expansion process that shaped a distinctive pattern of intraurban spatial organization. The stages are the Walking/Horsecar Era (pre-18001890), the Electric Streetcar Era (1890-1920), the Recreational Automobile Era (1920-1945), and the Freeway Era (1945-present). ...

Before 1850 the American city was a highly compact settlement in which the dominant means of getting about was on foot, requiring people and activities to tightly agglomerate in close proximity to one another. This usually meant less than a 30-minute walk from the center of town to any given urban point—an accessibility radius later extended to 45 minutes when the pressures of industrial growth intensified after 1830.

Today's focus on "complete streets" or levels of quality or service for all transportation modes instead of only the level of service for the automobile means a rebalancing of the use of space within the right of way, including the dedication of space on occasion to bicycling and transit at the expense and loss of primacy and privilege for automobilists--resulting in either a loss of parking or a reduction of the number of through lanes for motor vehicles.

Darryl Strucke and Alvin Pegues, both painters with the Department of Transportation, work to create a bike lane along Spring St. in downtown Los Angeles on Saturday morning. The lane runs along Spring St. from Cesar Chavez to 9th. "Thank you guys, I love you, " yelled Susanna Schick as she rode by on her bicycle. "You're making my commute to work a lot safer," she added. ( Rick Loomis / Los Angeles Times ) 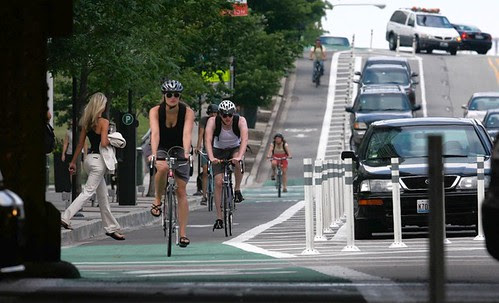 That loss of privilege is the source of reaction on the part of automobilists, e.g., the failed lawsuit against the Prospect Park West bike lanes ("Effort to Remove Prospect Park West Bike Lane Is Rejected " from the New York Times), the lawsuit in SF against bicycling that held up improvements for many years, the anti-bicycle and walking attitudes by conservatives at places like the Heritage Foundation ("War on the Dream: How Anti-Sprawl Policy Threatens the Quality of Life") and in the U.S. Senate and House of Representatives (e.g., "The Senate’s “Dr. No” Says He’ll Block An Extension Unless Bike/Ped Is Cut" from Streetsblog DC) and has nothing to do with perceived attitudes of superiority on behalf of bicyclists, with the possible exception of attitudes that may exist amongst bicyclists about sustainable mobility, energy use, an oil dependent American economy and the cost, etc.

When I bicycle I am not looking to proselytize about sustainable mobility or anything else, I am just trying to get to where I need to go. If I get there while simultaneously getting exercise, not much slower than taking transit, and without having to own a car, thereby saving thousands of dollars on transportation cost over the course of a year, all the better.

Were I to stop at every red light, and follow by the book every traffic law as a bicyclist, automobilists, who are really fighting loss of privilege and primacy and not challenging, for the most part, how cyclists ride on the road, would still rail against bicycling and protest against the use of any money--the proposed new federal legislation for transportation results in a minimum decrease of 30% of monies dedicated to walking and biking projects (the blog entry "Is federal funding for sustainable transportation funding screwed?")--or right of way space for walking and bicycling (and transit, including the massive campaign against the development of high speed rail).
Meanwhile big highway projects continue to move forward ("Second Midtown Tunnel coming - as well as tolls" from the Norfolk Virginian-Pilot and "ICC puts strain on Maryland’s transportation funds" from the Washington Post) despite significant exogeneous shocks to the American economy which ought to be indicators that automobile dependent mobility is unsustainable.