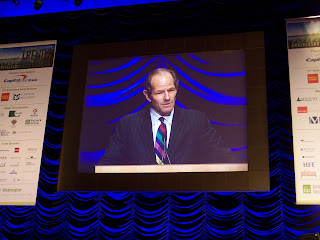 Tuesday was the ULI Washington 2012 Real Estate Trends Conference and there were many good sessions.
Elliot Spitzer, the ex--Governor of New York--who resigned over a scandal involving a prostitute--was one of the keynote speakers.
Ostensibly, his topic was about the Dodd-Frank financial disclosures act and the impact of the law's requirements on the real estate industry.
But then he went "off topic" to discuss some of the various trends impacting center cities and real estate markets, and he was just absolutely awesome.
The dude is smart and it is an absolute tragedy that hubris took him off the political scene.
Some of the things he said:
- the response to the real estate/Wall Street crash in 2008 wasn't handled right. "We saw it coming but no one wanted to stop it." He mentioned the Charlie Price of Citicorp quote "when everyone is dancing who wants to stop" and asked but what about the music and who chose it?
- he calls the response a "regulatory charade" and "the Peter Principle on steroids" because people like Tim Geithner, who was chief of the New York Federal Reserve Bank, were the people who contributed to the failures and then were the same people designated to "clean up the mess."
- one of his examples was when he was Attorney General of the State of New York and he sued the big banks for disclosure of certain information, and not only did the banks sue to not disclose, they were joined in the suit by the Office of the Comptroller of Currency, a bank regulator, who stated that states didn't have the standing to get the information. The case went to the Supreme Court and NYS won, on states rights grounds. Spitzer was incredulous that a regulatory authority would sue in favor of nondisclosure of information.
- the leverage ratios of the big Wall Street operations were insane, like 35:1
- the regulatory response hasn't been very good in response to the crash and the various changes aren't likely to be able to ward off other problems. He said that the "too big to fail" problem with banks believing that they can take risky bets because they can always rely on the Federal Reserve to bail them out is still present, based on the experience of the bailout.
He then went on to discuss what he sees as the real problems in the economy, that most of the profits and income increases are being captured by corporations and the richest of the rich (he conceded that he is one of the beneficiaries as his family has a number of large real estate holdings, primarily in NYC, but elsewhere as well, including in DC).
- median family income is stagnant, the middle class is shrinking. Middle class income will continue to fall. Since 70% of Gross Domestic Product is based on consumer spending, this has long term negative economic implications.
- he mentioned a piece by Chrystia Freeland of Reuters on the increasingly bifurcated economy in the US, of a small set of winners, and a much larger set of losers. (E.g., "The rise of lousy and lovely jobs.")
- that the hollowing out of the economy is speeding up exponentially, that we are outsourcing jobs that we thought were once impervious to outsourcing, that only the lowest level and highest level jobs will remain in the US, and of course, when you are competing against billions of workers worldwide, wages will continue to decline. ("When the world is flat, workers are competing worldwide and they lose their ability to negotiate for higher wages.")
- that most capital investment doesn't result in adding workers, that while it's great that manufacturing is coming back to the US, that it won't be like it was in the heyday of mass production based on labor as much as capital equipment. (He gave an example as Governor how they put state money into a GM automobile plant outside Buffalo and at the ribbon cutting he mostly saw robots skirting around the plant floor, not people). That we can't regenerate our economy significantly through manufacturing.
- the capital to labor ratio has changed, therefore fewer jobs, labor is losing market power.
- need a balanced, nuanced regulatory structure to work with this kind of economy
- cities as magnets for intellectual capital. That the future isn't about individual businesses as much as it is about individual intellectual capital.
- it is the intellectual qualities of people that populate ("attract") people to cities
- FIRE vs. ICE -- in the 1990s, discussions about NYC's competitive advantage centered around the "Financial, Insurance, and Real Estate" industries. Now, according to the chancellor of New York University, it's ICE -- intellectual, cultural, and educational institutions which are driving NYC's economy. He mentioned the example of Mayor Bloomberg seeking the creation of a Stanford University like engineering university in NYC and how it is going to be Cornell (see the Cornell U press release "Game changing campus goes to Cornell, Technion").
- it is intellectual (and cultural) capital that makes places attractive to new and existing businesses
- intellectual capital generates the ideas that capture capital
- and it's individual city dynamics that generate success for real estate investment in places like DC, New York City, Boston, and elsewhere.