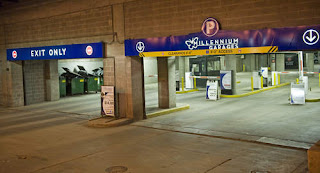 The garage under Millennium Park (itself used in part to fund the creation of Millennium Park) is one of the city-owned parking garages that has been leased out to a private firm. Photo: Rich Hein~Sun-Times.

The City of Chicago's leasing, first of four parking structures, and then all of their street-based parking meters, to a consortium led by Morgan Stanley, has been replete with problems. Overall, the city is said to have received about 1/10 of the value of the leases in upfront payments, which isn't enough. Residents erupted over big increases in meter pricing. Recently, the city was hit with a big bill from the consortium for the provision of "free" parking for the disabled.
Now, the city is being sued because a new private parking facility was allowed to open near the four parking structures, and there is a provision in the lease barring the opening of new and competitive parking facilities open to the public. See "Chicago faces $200 million claim over Aqua parking garage" from the Chicago Sun-Times.

Under the $563 million, 99-year deal that privatized four city-owned parking garages in downtown Chicago, City Hall made a promise:

It wouldn’t allow any parking facilities to open nearby.

That was six years ago, under then-Mayor Richard M. Daley.

Today, though, you can park just a block away in a new garage at the 82-story Aqua building — and it’s cheaper, too.

That’s angered the consortium of investors who took control of the garages and thought they were safe from competition. Their group, known as Chicago Loop Parking LLC, has filed an arbitration claim against the city that could leave Chicago taxpayers on the hook for $200 million or more, documents obtained by the Chicago Sun-Times show.

I don't know enough about contract law, but it's possible that if the city is represented by really top notch lawyers, they can get out of this.

The city didn't have the legal authority to accept the provision that they wouldn't allow other parking structures to open, because that would in turn restrict the otherwise "matter of right" development and use rights of other property owners in ways that are counter to public policy, and therefore is probably unenforceable.
To be specific, it's a violation of the takings clause of the fifth amendment of the Constitution, and illegal provisions in contracts are held to be nonenforceable.
If such a provision is upheld in favor of the parking consortium, on the other side for other property owners, it's a taking and those forbidden to build parking garages have cause for lawsuits of their own. (Takings are subject to lawsuits for reimbursement of lost development rights.)

It's not that building regulation isn't used to restrict certain abilities to use private property, but I suspect this particular provision wouldn't be upheld in court.

Still, it's an example of the need to write really good contracts, and ideally to have the "private" side of the "public-private" "partnership" to not be totally rapacious.

Indianapolis has done a similar kind of long term lease for its street parking meters, with ACS (based in Montgomery County, Maryland).
And Sacramento is moving to lease its parking structures and meters to raise money for its portion of the cost of a new arena (Sacramento City Council votes to enter talks with 11 firms seeking to lease downtown parking" and "Big cities cautious about privatizing parking after Chicago's effort" from the Sacramento Bee), although in recent days, the agreement to build a new arena has fallen completely apart because of resistance from the owners of the basketball team ("Sacramento Is Fresh Victim of Bad Stadium Deals" from Bloomberg News). But the process for leasing out the "public" parking facilities is moving forward regardless.