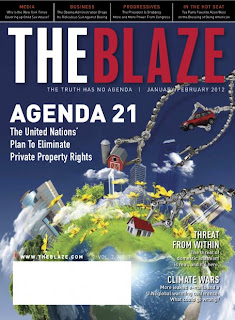 Last week, someone sent a link from the Biloxi (MS) Sun-Herald to an e-list I'm on, a screed letter to the editor about how the Congress for the New Urbanism, which did a lot of charrette work in Biloxi after it was devastated by Hurricane Katrina, is basically a plot to destroy individualism and the good life as we know it.

In downtown Ocean Springs there is a project that is mixed-use zoning. mixed-use zoning is where land is zoned to be commercial and residential. Usually it is store-front shops on bottom, office and apartments on top.

This is typically used in larger cities where downtown living become prime real estate, like New Orleans’ French Quarter or Manhattan. But Ocean Springs?
Sustainable development is controllable development.
When a city creates an entire living, working, shopping area it’s easier to control all aspects of life within that area.
So, Connie Moran has completely bought into Agenda 21 ... is she an environmentalist or a power-hungry politician with higher goals?

Read more here: http://www.sunherald.com/2012/05/15/3949607/vetting-connie-moran.html#storylink=misearch#storylink=cpy
So the person who sent the link suggested that maybe New Urbanists did something wrong by sending out images of density common in center cities, that somehow if different images were sent, people would respond different.

There was a parallel thread on the list about Bill Maher's piece asking why the right is so worked up about Pres. Obama.

I connected the threads, and wrote this:

there's nothing "new" with this, at least dating from the Clinton Administration.  I distinctly remember being surprised seeing bumper stickers excoriating Clinton, reading "Don't blame me, I voted for Bush."  Since that election, conservatives have never stopped "organizing" against Democrats, which they call communists and the radical left, amongst other terms.


It's a permanent campaign.

The key is that they have never gone off message.  Since 1988.

It's the same by the way, with the Biloxi Sun-Herald op ed.  You can call it anti-CNU, it's really just another shade of anti-planning or at least anti-anti-sprawl planning, therefore pro-automobile, pro-separated uses, pro tract housing, etc.  It doesn't matter what photos you show.  It's not about that.

The anti-planning contingent doesn't go off message either.  If there is High Speed Rail activity, they organize and write against it.  If there are comprehensive planning initiatives, they organize against them, including op-eds and the specter of Agenda 21 (hundreds of news article hits on current anti-planning conservative organizing come up when you enter this in Google, or this blog entry from a "disgruntled Republican in Nashville" who calls traffic calming another example of Agenda 21) .

If there is pro-transit activity, they organize against it.  Same thing with CNU or new urbanism related activities in podunk kinds of places, where it can sound strange...

Again, they stay on message, and don't let any opportunity to push their message go untapped.

This comes up locally, as the Washington Post reports in "Loudoun residents receive calls opposing Metro’s Silver Line," that the Koch brothers funded rightwing group Americans for Prosperity, described by the Post as "advocates for lower taxes and smaller government," has paid for anti-Silver Line robocalls to households in Loudoun County.  From the article:

“Loudoun cannot afford this bail-out to rail-station developers,’’ according to the script. “If the Loudoun County board opts out, the rail will still be built to Dulles Airport, and commuters will still be within five miles of Metro. Come tell the board of supervisors to opt out and save taxpayers billions of dollars.”

Frankly, from the standpoint of being pro-DC, I think that's great, better for the city if the suburbs stay sprawled, automobile-dependent and gridlocked.

I wrote a year ago ("Short term vs. long term thinking: transit, the Washington Examiner, Fairfax/Loudoun Counties vs. DC") that the Silver Line is really not so much about connecting to the airport as it is repositioning Tysons Corner specifically and Fairfax and Loudoun Counties generally to be more relevant 21st Century communities, given the evident increase in desire for urban, transit-connected, less automobile dependent living.

It's not like people have to come to DC for it, they can have it in Merrifield at the under construction "Mosaic District" or in a more citified Tysons Corner.

But the anti-transit, anti-planning, anti-railroad, pro-sprawl contingent can't afford to have any successful counter-examples floating around, so they continually rail and organize.  (I guess that's why the "local" Washington Examiner is so consistently anti-Silver Line too, "Virginia's white elephant needs to be put down," since the newspaper espouses a hard right agenda, even while its owner scoops up "subsidies" from "taxpayers" for the company's various stadium and arena endeavors.)

This can't be ignored by people and organizations who are pro-transit, pro-planning, pro-railroad, anti-sprawl contingent.

It will waste a lot of time to counter the threat, but it has to be done.

(I guess the Koch Brothers learned from Charles Stewart Mott, George Soros, and other rich progressives who supported progressive organizations and causes.  The problem is that conservative interests tend to have a lot more money to pour into anti-progressive causes.)