Alternative routing for the Metropolitan Branch Trail in Brookland

So we had a business meeting in Brookland today with regard to "bicycle facilities systems integration" type activities, and the Metropolitan Branch Trail came up.

The Metropolitan Branch Trail is one of a handful of shared use paths (pedestrians + bicyclists + other--runners/skaters/dog walkers etc.) in DC, along with the expanding Anacostia River Trail and others that combined with cycletracks, offer incredible future potential in terms of making cycling a top choice for sustainable mobility in DC.

For a long time I was a proponent of "vehicular cycling" focused on road riding and mixing with traffic, but then riding on a segment of the Northwest Branch Trail in Prince George's County (see the past blog entry "Shared use paths (trails) and safety and marketing") and being introduced to some of the work by Portland Oregon bicycle transportation planner Roger Geller ("Portland's Bicycle Brilliance" from The Tyee) and Rutgers Professor John Pucher (such as "Making Cycling Irresistible") made me realize that many people will bike, just not in high speed/large traffic volume situations, provided that we provide the right kind of infrastructure.

It's not until you ride a trail/shared use path that you realize how much mental energy is expended while riding on defensive riding and worrying about cars.

The quest to build the Metropolitan Branch Trail from Silver Spring to Union Station also is an example I mention frequently of how long it takes for transportation projects to come to fruition.  The idea of the trail, first focused on the Brookland neighborhood, was proposed by Brookland resident and then Montgomery County planner Patrick Hare, in 1987!!!!!!!!!!!!!!!!!!!!!

It's now 2012 and there are only a couple of off-road segments that have been constructed, in Takoma Park, Maryland and the more than 2 mile segment from Franklin Street to L Street NE--which opened in 2010.  The rest is on-street, although the portion on John McCormack Road from the CUA campus to Bates Street functions as a kind of bike boulevard.

The trail won't be finished probably til the end of the decade (especially segments in Silver Spring, Maryland) meaning it will be a 30-year quest from concept to finished infrastructure.

Anyway, I think getting two segments completed in the "short term" are really important, the section between Fort Totten Metro and Bates Street NE (John McCormack Road to Fort Totten Metro)--currently one has to ride up the hill of Bates Street to Fort Totten Drive--and the section between the west side exit of the Brookland Metro Station and the entrance to the off-road section at Franklin Street NE.  (A third segment, not technically part of the trail concept originally, would be from Fort Totten to West Hyattsville, connecting to the Northwest Branch Trail network, and thereby to the Anacostia Riverwalk Trail, is also very important.)

The latter segment will be augmented by the coming development of the Monroe & Market project on deaccessioned Catholic University land between Michigan Avenue and Monroe Street NE (the project extends south of Monroe to between Kearney and Lawrence Streets depending on the block). 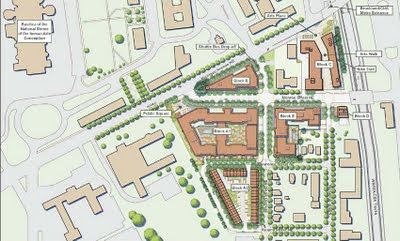 Part of the project includes extending the trail trackside between the Metro to Monroe Street.

At that point the trail is supposed to continue on the sidewalk, down 8th Street NE.

But the building users on that street are a mix of industrial uses, schools, arts housing, and miscellaneous that won't ever go away, and for decades, it will be impossible to create a continuous and safe on-sidewalk route.

I think the trail should be diverted to 9th Street NE, between Monroe Street and Franklin Street. This way the conflicts with property and industrial users and a street with parking on both sides will be eliminated. Only one block of 9th Street between Franklin and Monroe Street has parking. On the other hand, you need to expand the Franklin Street Bridge.

First, there should be an extension across the Monroe Street bridge to provide a wide bike trail (although this could clash with the potential for liner buildings across the tracks, at least on the north side of Monroe Street) connection to 9th Street NE. Although this isn't absolutely necessary, but is desirable.

What are Bicycle Boulevards?
Bicycle boulevards take the shared roadway bike facility to a new level, creating an attractive, convenient, and comfortable cycling environment that is welcoming to cyclists of all ages and skill levels.

In essence, bicycle boulevards are low-volume and low-speed streets that have been optimized for bicycle travel through treatments such as traffic calming and traffic reduction, signage and pavement markings, and intersection crossing treatments. These treatments allow through movements for cyclists while discouraging similar through trips by nonlocal motorized traffic. Motor vehicle access to properties along the route is maintained.
-----------

At Girard, 9th Street "dead ends" into an industrial site mostly owned by WMATA.  The trail could continue on an easement against the railroad tracks and the bridge could be widened (actually a parallel side bridge just for a trail path) could be added on the north side of Franklin Street, back to 7th Street.  An abandoned street/alleyway/easement could be upgraded to provide a path to the trail entrance.

Monroe Street bridge, from 9th Street NE looking west (towards 8th St.).  The Monroe & Market project is located across the bridge on the upper right. 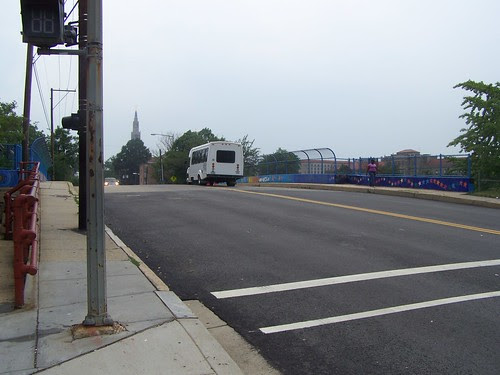 North side of Franklin Street bridge

Side road between Franklin Street bridge and buildings, between 7th and 8th Streets NE 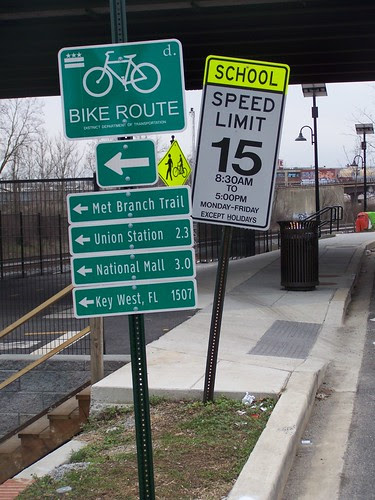 8th Street NE, the on-street route for the MBT