Car sharing as a method for managing the demand for on-street parking: Hoboken, New Jersey 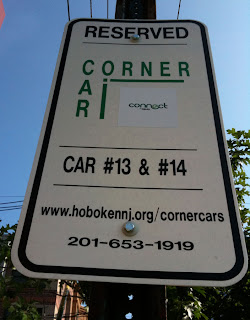 In the entry a few back on car sharing, I forgot to mention how Hoboken, New Jersey is specifically promoting car sharing as a way to manage the demand for a scarce and unchanging inventory of on-street parking spaces, with the intent that more car sharing users equals a reduction in the number of cars owned by residents.

See the city's webpage on Corner Cars and this piece, "Cars at Curbside, Available to Share," from the New York Times. From the NYT article:

The program, called Corner Cars, is based on the rent-by-the-hour model that companies like Zipcar and Hertz have been offering for years. In other cities, however, those cars are stored deep in parking garages or clustered in a few neighborhoods. Hoboken’s shared cars are parked on the street, in special bright green spots that appear every few blocks so they are never far out of sight or mind.

How Do Corner Cars Improve the Parking Situation?
Surveys have shown that for each of these vehicles in Hoboken, over 17 households have given up their cars! An additional 20 or more households have said they delayed or avoided buying a car because of access to these cars. So, every time we put one of these cars on the street, we’re reducing demand for parking. The first wave of this program includes about 50 Corner Cars, so we expect to see over 750 cars removed from the streets!

City officials and the Hertz car rental company, which runs the program, say it's taken cars off the streets and created a few scarce spaces. About a quarter of the nearly 3,000 people who have become members of the program said they had handed in their parking permits, not replaced cars they were getting rid of or opted not to buy new cars, Mayor Dawn Zimmer said. ...

Car-sharing in American cities has existed for at least 10 years. Zipcar, the most recognizable name in the industry, offers cars in 18 metropolitan areas and on 250 college campuses. But Hoboken took a gamble by using only street parking spaces, rather than using garages or parking lots, for car-sharing.

"What's unique is the degree to which the city is involved in the program and that it's all on-street," said Kevin McLaughlin, who publishes CarSharing.net, an industry website.

(Apparently Zipcar is active in Hoboken too, but likely they were outbid by Hertz in terms of the Corner Car program.)

For whatever reason, people in DC--residents and many public officials (who ought to know better)-- don't seem to be able to understand this, that providing and supporting car share is beneficial, and helps to better manage scarce supply.

Instead DC's policies privilege car owners and penalize people who are interested in sharing and using cars collaboratively, rather than owning a car which would be scarcely used and mostly sit on the street in a form of car storage.

Although car owners in New Jersey are still privileged over car users with regard to car sharing.  In New Jersey, car sharing vehicles still have to pay the $5/day "Domestic Security Fee" assessed against cars in the fleets of rental car companies. This increases the hourly fee paid for by users of the service. Although the AP story reports that the state is considering legislation to exempt car sharing vehicles from this fee.

I think that it is an easy way to increase the trends of car sharing across the US. The people should adopt this great idea to increase the free spaces in the car-parking.
auto transport quotes