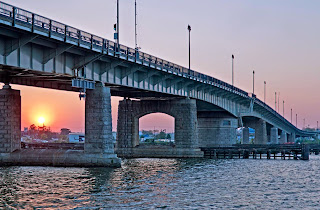 At this week's design advisory meetings for the 11th Street Bridge Park project, in a side conversation, one of the committee members suggested that when a new South Capitol Street Bridge is constructed, that the current Frederick Douglass Memorial Bridge could be retained as a walking and biking bridge.

In order for that to happen, the idea needs to be integrated into the bridge planning and reconstruction process now. 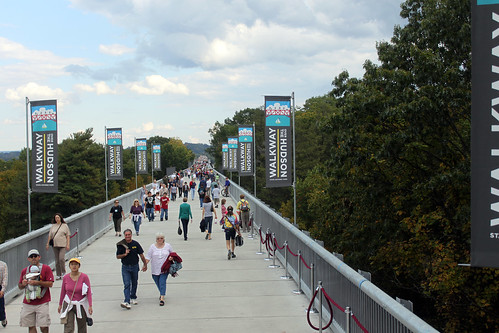 
The Poughkeepsie-Highland Railroad Bridge was built in the late 19th century to link New York and New England to an extensive, nationwide railway network. For decades, it was a major rail corridor for both freight and passengers.

After a fire in 1974, the bridge was abandoned and sat for decades as an orphaned relic. This brand new park was made possible due to the unwavering commitment of the community, who, through a non-profit organization called Walkway Over the Hudson, forged a public private partnership involving the State of New York, the federal government, neighboring municipalities, private corporations and other not for profit groups.

In 2010 the bridge was lighted and it happens that just this week, a new element to the bridge park, an elevator, opened.  See "Walkway Over the Hudson elevator makes grand debut" from the Poughkeepsie Journal.  According to the article, more than 700,000 use the bridge each year.

While claims of it being the longest pedestrian bridge in the world are not credible, another example of the repurposing of a bridge exclusively for pedestrian (and bicycle) traffic, is the Walnut Street Bridge, which crosses the Tennessee River in Chattanooga.

Given that the river crossing conditions on South Capitol Street for pedestrians and bicyclists are so sub-par, this concept of retaining the current bridge for walking and biking would be a significant enhancement to the city's public realm and walking and biking infrastructure.

I've always argued that rebuilding the aqueduct bridge between Georgetown and Rosslyn as a bike/pedestrian bridge would be fascinating. Does not seem to be in the plans. Far more useful than a gondola.

I'm not sure how you would handle the recreational boat traffic but swing/drawbridges are a also a lot of fun.

Perhaps stripping it to piers and then rebuilding is a also an effective measure.

I'll do a blog entry on this later in the week, related in a way to the "Anacostia" series.

The big entry I still have to do is created a "Villa Mediteranee" by the proposed Brige Park to be a multifaceted conference-exhibit-organization-education center dealing with water issues/urban environment.

it would be nice if some of the people in charge of this project would get more imaginative and start thinking about maybe enticing larg ships to come back to the navy Yard- even as ceremonial visits as they always did up until recently. It would be a great bonus to the city to have this kind of activity going on. It would also enhance our experiences if cruise ships such as the Crown Monarch made it up the river to DC every so often. We once had a real maritime history and heritage here but it walloed to dry up completely. The last time I recall any kind of martime festivity /visit was when the replica ship of Captain Cook's voyage stopped in DC at the channell and at the navy Yard, then docked at old town Alexandria. Speaking of that port- they get all of the navy visits- that is- whenever they take the trouble to send a ship over here. Having a bridge that would open at South Capitol street to allow large ships would be a great idea. Closing the access would be a mistake IMO.Carl Cole was once involved in trying to get port authority returned to DC. I have no idea if his efforts have stymied or if he is still at it.

Looking at the pictures of the Walnut street bridge, it looks like it used to be a 2 lane road with sidewalks and seems quite wide for just pedestrians. The Frederick Douglass Bridge is currently 5 lanes so it's probably at least 20 feet wider which seems like it would be too much for just biking and pedestrian use. If the structure is adequate perhaps people could set up some stands or even permanent shops along one side of the bridge. Other than that it seems like a good idea to save the bridge, it'd be a waste to have done all the work renovating it just to tear it down a few years later

The idea of a Ponte Vecchio styled bridge was put fourth by Cloethiel Smith [ is that how her name is spelt?] back in the 60's- it would have spanned the Washington Channel . Not a bad concept from a Burtalist thinker.Great idea- it should be done here and it would be fantastic !!!

didn't know about the Cloethiel Smith proposal. And am not sure exactly how I feel about it.

2. Another way that retrocession of Arlington and Alexandria has hurt us is in terms of the river. Having both sides "in one city" would make for more interesting riverfronts and riverscapes, although the river is pretty wide.

3. wrt the Anacostia River and ships, I learned that after the 11th St. bridge, the depth of the river drops precipitously, is about 6 feet deep in the main channel.

One of the environmental difficulties is that there isn't a lot of water coming into the river from points north in Maryland.

The part of the river up to the 11th St. bridge especially is tidal. DK if that helps contribute to the depth, which up to their is capable of handling large ships, as the Navy demonstrates with ships that are docked at the Navy Yard.

Recently I picked up an older Texaco (Gulf used to publish them too) boat map of the chesapeake region. I'll have to dig up it and see what it says about the Anacostia.

4. Were I to win a massive lottey payout in the hundreds of millions, besides creating my ideal urban grocery store, I might set up a couple of steamboats to run in and around the Chesapeake.

Yep - the biggest hurdle seems to be that dredging needs to happen- historically the Anacostia was 40 feet deep in most places and was deep all the way to Bladensburg which was also a harbor. It was kept dredged until they found PCBs in the subsurface sediments- I was told by an expert from the navy Yard that the Anacostia has among the worst PCB concentrations ever found- possibly from the power plant at Benning Road and also from the machining of guns/ cannons - PCBs were used as lubricants in this process and that was a big reason that Albany had such PCB trubles- Watervliet's gun factory was the US Army's analogue to the WNY gun factory . Watervliet is still in opertaion . For some reason they were able to clean up the upper Hudson but there are excuses being made for the Anacostia. I do not get this.

I guess part of it is the lack of water movement in the upper reaches.

"They" were able to clean up the Hudson, because GE was forced to spend over a billion dollars (I believe it was in excess of $2 billion) to do so. Any deep pockets on the hook for the pollution in the Anacostia? I don't think so.