They recently conducted an analysis of major metropolitan areas in the US and Canada with a minimum of $30 billion in annual personal income (plus Green Bay, home of the Green Bay Packers football team, even though otherwise the metro wouldn't qualify), which is the minimum amount they deemed necessary to adequately support a professional team.

The article goes through each league and its opportunities and provides a long term scenario for how things could look it 25 years.

-- "Scenarios: What will professional sports leagues look like in 2040?"

We used team revenue data and average ticket prices to estimate the amount of TPI [Total Personal Income] needed to adequately support a team in each of the professional leagues above, as well as any of the 64 college football/basketball programs within the Power Five conferences (Atlantic Coast, Big Ten, Big 12, Pacific-12 and Southeastern), as well as Notre Dame's independent program. 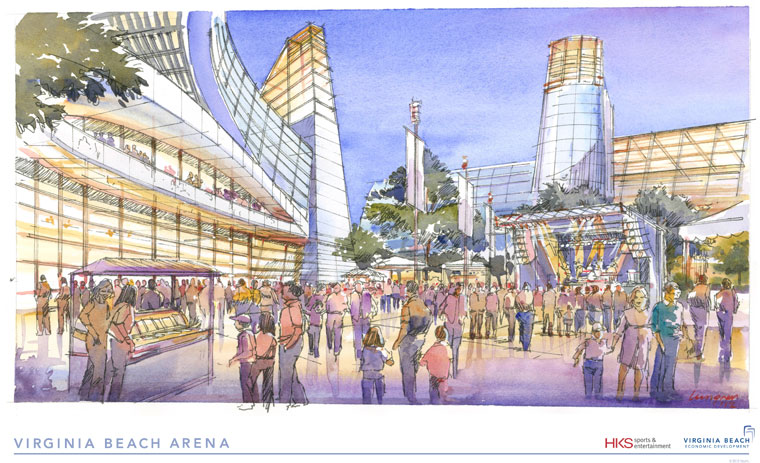 Rendering of a proposed arena in Virginia Beach.

According to the analysis, Baltimore is already at maximum capacity, and lacks the personal income numbers necessary to support the addition of a professional hockey, basketball, or soccer team.

Interestingly, Virginia Beach-Norfolk, which briefly was in the running for a relocated basketball team, has the financial capacity to support one. Richmond, with a TPI of $57 billion, could support a soccer team or either a basketball or hockey team--although being a southern city, hockey might not make sense.  Perhaps a basketball team shared by Virginia Beach and Richmond could be quite successful--the games in each city would be more of a special event because there would be fewer.

However, some communities are "overextended" in that the personal income required to support existing teams is not enough according to the calculations. From the article:


Atlanta's TPI, for instance, is $249 billion. Its three professional franchises (MLB, NFL and NBA), an MLS expansion team that will begin play in 2017 and its two Power Five programs (Georgia and Georgia Tech) require a TPI base of $263 billion, resulting in a deficit of $14 billion.

However, I would argue that one problem of including college teams in the analysis is that their support base isn't limited to residents of the metropolitan area, but includes out-of-area alumni who may make special trips to attend games. This is especially pronounced in football attendance.

Additionally, college athletics is supported by student fees, other university funds, and donations, which wouldn't be included as part of the calculation of the revenue stream compared to professional teams.

Another problem with the analysis is that it focused on income capacity, but not as much if it makes sense for certain markets to have certain types of sports teams.

For example, Montreal is identified as having the potential for a baseball team, yet the Montreal Expos were never particularly successful--although they did experience some seasons with 2 million attendance, and if the team had good ownership, maybe fan interest would have increased--and moved to Washington, DC effective with the 2005 season. And is the Southwest really a great market for hockey, a sport which originated in Canada's winter weather?

Lots of room for expansion for most sports, except baseball.  Countering conventional wisdom, according to the analysis there is the capacity to add 80+ teams across the five major sports leagues.

As many as 37 markets have the capacity to support a Major League Soccer team, 17 markets--including Los Angeles, where currently three teams are bandying about the idea of relocating--are capable of supporting an NFL football team, 15 markets can support an NHL hockey team, nd 14 markets could support an NBA basketball team.

No markets have the capacity to support a baseball team according to the analysis, although Montreal is the closest. (Interesting, syndicated sports columnist Norman Chad suggests that the Havana Sugar Kings could be brought back as a pro team, as a way to build US-Cuban relations.)

=====
Note that while I still generally am not in favor of providing subsidies to teams to build stadiums, arenas, and practice facilities, I have come around, some, on the issue of whether or not professional sports teams have the capacity and capability to contribute to urban revitalization.

They can, provided the facilities are integrated into broader districts--plans for new arenas in Sacramento and Detroit take this concept to the next level--incorporating high quality urban design and enabled by transit as the primary mode for attendees.

And while it is true that at the metropolitan scale, the addition of a sports team merely moves the spending around, when a team locates in the center city, it can support revitalization by assisting in the rebranding and repositioning of the city, supporting transit, and inward migration of population.

I have delineated a list of the factors that shape whether or not a sports venue contributes positively or negatively to urban revitalization.  See "An arena subsidy project I'd probably favor: Sacramento."

Check out these folks' work--especially the football stadium in Mexico:

will check it out. thanks as always for the references.