The National Real Estate Investor magazine reports ("REITs Will Pursue Street Retail More, Analysts Predict") that real estate trusts operating on a national basis in high value markets are buying properties in high profile traditional commercial districts--but not just in big cities, but in "secondary markets" like Savannah too--because it can be more profitable than other types of retail-related properties.


Street retail offers landlords some other advantages as well, noted Ken Bernstein, president and CEO of Acadia Realty Trust, during a conference call on May 12. The supple/demand ratio there tends to be more favorable to landlords than at suburban retail centers. The leases are shorter, so there are more opportunities to raise rents. And annual contractual rent growth is close to 3 percent, above that for suburban locations. The street retail play has proved so successful for Acadia, the REIT is investing not only in established locations, but in what Bernstein calls “next generation” streets like the Bowery in New York City and Broughton Street in Savannah, Ga. These areas offer “higher risk and, hopefully, higher returns,” he notes.

For his part, Sandeep Mathrani, CEO of General Growth Properties, talked about the unique branding value that street retail holds for chain retailers. He noted that three of today’s most successful global fast-fashion chains—H&M, Zara and Uniqlo—first attempted to break into the U.S. market with stores at regional malls, with limited success. It was the opening of flagship stores on high streets, particularly in New York City, that brought them the kind of brand recognition that allowed them to expand throughout the country. Locations on urban high streets create a branding opportunity, drive sales and allow retailers to display their entire merchandise collection, Mathrani said.

As more properties and commercial districts are repositioned and cease being local markets but instead are integrated into national real estate markets, it will become much harder for independent businesses to get leases, plus rents will go up. 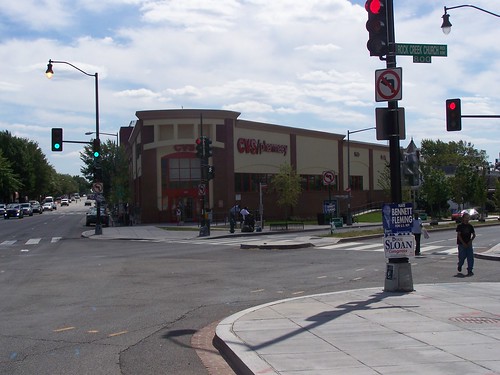 REIT involvement is already a potential problem in cities, because traditional "pure play" REITs don't like dealing with mixed use properties.

That's why we have single story drug stores on streets like Georgia Avenue NW, at major intersections.

The underlying property owner, a REIT, doesn't want to deal with building, leasing, and managing multiple floors and multiple tenants, even though such buildings are preferred for urban design and city vitality reasons.

Elsewhere in DC, as REITs have acquired properties in Dupont Circle and Cleveland Park, independent businesses have been displaced in favor of chain retailers, banks, and other "credit tenants" ("Is a National Credit Tenant the Best Choice for My Retail Property?," Huffington Post).

This CVS is in a four story building on Canal Street in New Orleans.  In all likelihood this building isn't owned by an REIT.

The Washington City Paper wrote about this in 1999 ("Blocked Out: As the investors flow into a Dupont Circle block, so does the antiseptic." when Starwood Urban Investments bought properties at the corner of Connecticut Avenue and R Street NW and kicked out the funky and independent Newsroom (a great store carrying periodicals from around the world, but that retail category is dying these days) in favor of a branch of Commerce Bank (now TD Bank).

A few years ago, the property was sold to Acacia REIT, a firm mentioned in the

No question it is a problem. A big part of Arlington's problem is that for 10 years new building just brought cell phones, banks, and cvs rather than something interesting -- and the investors were the ones who wanted that.

You have to give apple some credit here as well.

The REIT issue is more that you really have to show q returns and return that cash to investors and can't hold on and wait to appreciate.

Related to your other post (I didn't agree with it) but a large part is a broader question of how an area and city ages (your HP issues) and how to invest in it again. Misguided approaches such as taxing vacancy lead to people teraring down buildings so at least they can run it as a parking lot.

FYI - the New Orleans CVS is a historic building, a former Gus Mayer department store and protected by preservation laws. The upper floors are unused (like most historic buildings on Canal St), so functionally is no different than the Georgia Ave example you posted.

I don't have a problem, theoretically, with who or what owns a property. The problems come in how they conceptualize, manage, and operate the properties.

It's like what Leinberger called "the 19 property types of real estate development" linking product type and financing.

WRT "credit tenants" focusing on them makes it difficult to develop new businesses and local businesses, if not nascent chains, at least local chainlets, like say, South Moon Under or Lou Lou.

In the old days, Kay Jewelers developed as a chain, starting in DC. People's Drug did too. It got up to 900+ stores I think before CVS acquired it. And Hechts was a very large division of May Co., almalgamating Thalheimers of Richmond, part of Wanamakers, Strawbridge & Clothier, and other companies. It got up to 70-80 stores before it merged into Macys.

2. and I am not doctrinaire like I was 15 years ago, about all independents. I now understand pretty well about the value of a mix of national retailers and locals, if a district appeals to both, serving as a "regional shopping district" of some scale (e.g. Steinway St. in Queens/Astoria or Union Square in Manhattan are "regional" centers but serving Queens and Manhattan respectively, without attracting people from other jurisdictions).

ardecilia -- I did not know that. I guess it doesn't surprise me, but that's because of the weak market nature of New Orleans and lack of demand, not because of the building, in all likelihood.

A four story building at the Georgia-New Hampshire intersection, at least because it's across from a Metrorail station, would definitely lease out.

But I understand how that doesn't happen in emerging and transitioning districts, and it was a factor in the old days of central and major shopping districts, as they declined, the upper stories went vacant.

In some places, they lease them out as housing, but that is problematic too, because in most jurisdictions, tenants rights laws kick in, making it hard to get rid of bad tenants.

Tricky stuff all around.

2. I think the store is ironic, in fact, I'm gonna do another brief entry. As you know, CVS aped the historic Walgreens store a few blocks down. In other places, CVS isn't so keen on either retaining or aping historic signage and building elements. (One of the building designations I was involved in was an old theater in DC with a CVS. CVS sort of retained the marquee treatment, but in 2007 they changed their minds and were going to change it significantly, hence the landmark nomination...)

... in the early 1980s, upper stories on Main Street in Ann Arbor tended to be empty as well.

I’ve connected with numerous people who got scammed by tenants.
There are services out there which can assist with screening for bad tenant such as www.bzinterviews.com