I haven't gotten around to writing about the creation of Union Square in Greensboro, North Carolina ("Union Square Campus groundbreaking kicks off," Triangle Business Journal), which is spurring revitalization and development through the leveraging and co-locating of area college and university programs, specifically nursing.

One of the models for Greensboro is the University District in Spokane ("Campus evolution: WSU kicks Spokane development into high gear," Spokane Spokesman-Review), where five universities--three, University of Washington, Washington State University, and Eastern Washington University with branch campuses, while Gonzaga and Whitworth are based in Spokane, and the local community college system are collaborating on the redevelopment of the old waterfront district, a 50-acre parcel adjacent to Downtown. 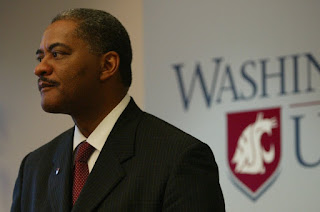 While the creation of the U District in Spokane has been underway for more than a decade, approval from the Washington State Legislature for WSU to create a medical campus in Spokane just a few months ago was a crowning achievement of WSU President Elson Floyd, who died earlier today while undergoing treatment for cancer, according to the Seattle Times ("Elson Floyd, WSU president, dies at 59").

Jensen-Byrd Building photo from the Washington Trust for Historic Preservation.

The medical school will anchor a massive building program about to be undertaken mostly by WSU for the Spokane branch (list from the SR article) totaling more than $300 million of construction in the University District:
In researching about Greensboro about their project and looking more closely at their higher education efforts--one is the Joint School of Nanoscience and Nanoengineering where the Dean reports to both the North Carolina A&T State University and The University of North Carolina Greensboro, I was struck by the fact that DC has many many universities, but they don't work together very much.

The kind of motivations in Greensboro--shrinking state appropriations are "encouraging" the colleges and universities there to work together in order to be able to do new and innovative programming--don't appear to be present to the same degree, even though some of the universities are experiencing financial difficulties.

Note that in the past I suggested that DC not create a separate community college, but join with Montgomery College or another area community college system to not have to unnecessary duplicate and spend money on administration, and to start from a stronger position, rather than mostly from scratch ("Creating a community in the District of Columbia").

And about UDC and how the city could consider modeling the provision of higher education as a series of joint ventures between local universities, comparable to how the SUNY system in New York contracts with Cornell, Syracuse, and Alfred Universities to deliver some state college programs, at otherwise private schools.("Whither UDC?").

It's also somewhat damning that none of the city's universities has a great urban studies program.

this blog is more information are provide.