A lesson that seeing is believing: Panasonic's new building in Newark, NJ as an example, positive and negative, in businesses coming back to the city center

A couple months ago Smart Growth America released a report, Core Values: Why American Companies are Moving Downtown, and had a press conference/webinar on the findings, about the positive trend of office-based organizations moving "back" to the city from suburban locations.

I wrote a long piece about it, "Smart Growth America report on businesses moving back to center cities (and suburban core business districts)."  But I haven't seen any of the places in person. 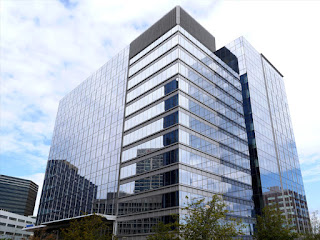 It turns out that I only had part of the story, which I learned when  I saw a presentation a few weeks ago about some revitalization projects in Newark, and Newark's new US headquarters for Panasonic was discussed--although interestingly the presenter refused to identify the building or the company.

It turns out that as far as street level integration, ingress, and urban design matters were concerned, the Panasonic building is as much an example of failure as it is of urban success.

The image below, from Google Street View, shows how the building's perimeter is fenced off from the sidewalk and street.

1.  Many of Panasonic's top officials and employees likely were afraid of the center city location, even though they understood the relocation as a forward thinking move for the company.

These kinds of fears aren't unusual, even in DC.  For example, employees at the Equal Employment Opportunity Commission were angry about moving to the then "frontier" location in NoMA across the street from the Metrorail station.  I wrote about it in 2007:


Part of it too is perception, as the Post reported in this short, "EEOC Is Moving On; Fast Food and a Dicey Neighborhood Await," workers often look askance at having to work in revitalizing places. The caption of the photo accompanying the article states "Some at the Equal Employment Opportunity Commission fail to see the upside of moving from downtown Washington to Northeast. The new headquarters' neighbors will include 'one of the largest open-air drug markets in the region'" and the article doesn't get much better:

"The Equal Employment Opportunity Commission is in an uproar over a decision by Chair Naomi C. Earp to move its 500-employee headquarters from fine offices in downtown to a "developing" -- but not quite arrived -- area in desolate Northeast near the old Woodie's warehouse on New York Avenue."

At a hostile meeting yesterday to quell a growing rebellion, Earp told several hundred employees -- and others viewing on closed-circuit television -- that "the determining factor is price" in her decision and that employees "should not overreact to concerns about safety."

These days the area where EEOC is located is quite successful, with a full-line grocery across the street, and an increasing array of amenities.  I can't imagine that EEOC employees are particularly concerned about their safety there, these days.

The Panasonic building is located a long block, 0.2 miles, from transit--Newark's Penn Station, a major station on Amtrak, NJ Transit, and PATH.  But allegedly the company wanted the city to develop a completely underground connection between the transit center and the building, so that employees wouldn't have to mix with the riff-raff on the street.

Note that according to the company, at least 57% of the employees arrive to work by transit. 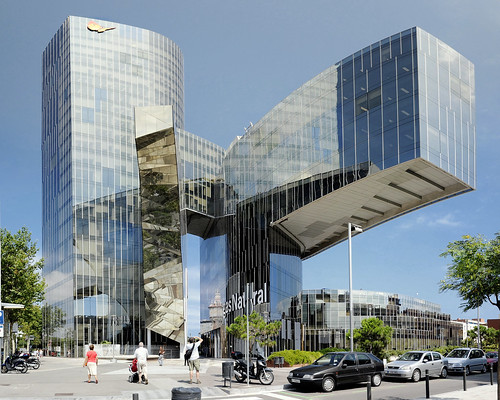 By contrast, I came across a mention of the Natural Gas company headquarters in the Barceloneta neighborhood in Barcelona (pictured at left), where in return for height increases and other variances, the company made the spaces around the building publicly accessible and deeded the space to the local government.

The spaces outside and the ground floor of the regional headquarters of Unilever in Hamburg, Germany are also open to the public. 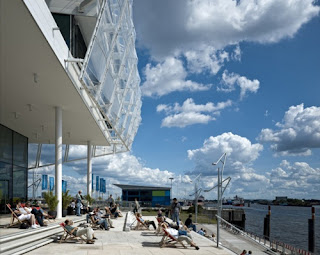 Public space along the waterfront in HafenCity, outside of the Unilever building.

A ground floor open to the public was one of the design requirements specified for the property by the area's development corporation   From the article:


The program brief required that part of the building be open to the public, which inspired a dynamic layout not often found in office buildings. Visitors enter a light-filled atrium, criss-crossed by walkways and ringed by interior facades with operable windows. The ground floor features an employee cafeteria and test kitchen, along with public amenities—a café, small spa, and grocery store stocked with Unilever products. Outside, a patio merges with stairs leading down to a riverside promenade.

3.  Panasonic failed to use space within the new building as an opportunity to showcase their brand.

I believe that Panasonic has a small product space on their ground floor but it isn't opened up to the public or on the scale of the Unilever store in Hamburg--and Unilever has created similar stores in other of their office buildings in the US, Singapore, and elsewhere.

Ironically, Panasonic has a big showroom--three floors, each devoted to a specific product category--at their headquarters in Osaka, Japan.

Think if Panasonic would have created a signature "store" like how the Nike ("Nike Reopens its Flagship Brand Presence in Chicago," press release), Sony, or Apple stores have been created by those companies as a way to showcase and represent their brands. 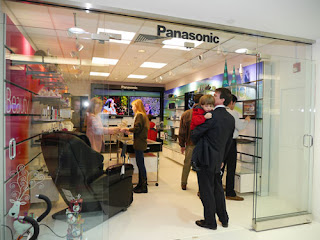 Ironically, Panasonic has done something similar, at the Mitsuwa Marketplace Japanese supermarket (pictured at left) in Edgewater, NJ, just not at their headquarters.

Such a move would have helped the brand and the company's image, as well as improved "the retail offer" and experience and attraction possibilities in Downtown Newark.

=====
The presenter laid this out with the narrative of "look how much the company sucks."

Others in the audience (all artists) thought the project was an example of businesses going back to the center city but an example of "corporations taking over and remaking the city in disconnected ways."

I was more focused on the failures of the planners because it's our job to show a better way, which we can't expect to come about unprompted from traditional developers or corporate facilities managers and officers.

After all, we have plenty of bad examples to learn from.

1.  Newark should have already had in place a station area urban design plan for the area, specifying activation-related improvements and connections for the ground plane in the mobility shed of the station.   There are various city plans (Master Plan, Downtown Revitalization Plan, etc.) in existence but clearly they were inadequate to the task.

Since the State of New Jersey has a major "Transit Village" transit-oriented development initiative, that seems a logical first step for all major transit stations.  The city created such a plan for the Broad Street Station area in 2008.

Had such guidelines been in place, it would have been easier for the planning department "to persuade" Panasonic to do more of the right things for the ground plane of the building and site.

2.  Alternatively, states and cities should build into their tax incentive provision agreements urban design requirements, to ensure the maximum positive economic and social return on the use of public funds.

Panasonic received a $104 million tax credit ("Panasonic gets tax credit approval for Newark move," Newark Star-Ledger) for the move.  Some criticized the credit because the company moved from one part of the Newark suburbs to Newark proper.  However, the state has lost a number of headquarters facilities recently (e.g. Mercedes Benz moved to Atlanta), so you can see how the state may have been motivated by retention as much as by recruitment.

Still, in return for that amount of money Panasonic and the developer should have instituted urban design-appropriate treatments for the ground floor and surrounding spaces of the building.

2.  There should have been organized "familiarization" activities for the employees beyond what was done focused on increasing their comfortability with their new urban setting.  (Note that this is a problem in most center cities where a preponderance of employees herald from the suburbs.  For example, most of DC's suburban office workers don't deviate much and explore Downtown outside of the short distance between their workplace and whatever Metrorail station they use.)

See "Newark goes all out to assure arena visitors' safe passage," Newark Star-Ledger, for an example of how Newark employed a similar approach concerning their then new arena.

3.  If at the outset the planners were unsuccessful in convincing Panasonic to change their treatment of the ground plane at the building's opening, they could have specified a program of phases where over time, improvements leading to a re/opening and re/connection of the ground plane to the station area and business district could be implemented, with the end goal of removing the fence and connecting to the city rather than walling off from it.

4.  In any case, I believe that the Newark City planners should have laid out these kinds of counter-examples as a course of action in order to yield a better urban design outcome, and they should take some responsibility for the failure, especially because there are many examples around of how this could have and should have been done differently.

Conclusion.  I still believe that Panasonic should be commended for moving from the suburbs to a center city, transit-connected location. 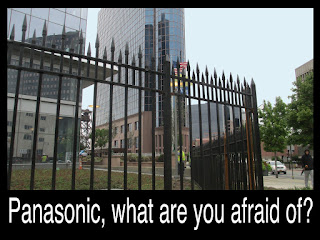 But at the same time, the SGA report should have included some lessons on the negative urban design experiences of the Newark example--elementary school students had a petition focused on trying to get the company to not fence in the building.

By being aware of these issues, and being armed with other, better examples, other cities can get better results from similar relocations than is the case so far in Newark.

Excellent article! We will be linking to this great article on our site. Keep up the great writing.