DC converted a "pocket park" that ended up being used mostly by neighborhood loiterers (not homeless people) for illegal public drinking into a fenced-in garden.

One of the problems with such spaces is that they require tending different from merely cutting the grass, and likely the Department of General Services--the GSA-like DC government agency that now has the responsibility of maintaining all government-owned facilities, even parks--doesn't have many "gardeners" on staff. 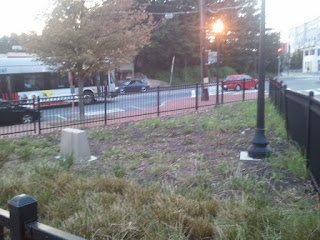 Ornamental plantings after being "mowed."

It's sad but also funny and an illustration that the typical government agency doesn't have the skill set to provide differential maintenance as needed for spaces outside of the typical and average installation.

That's the main reason for the creation of "business improvement districts" and other special services districts that under agreements with local governments, get funding from additional assessments and provide day-to-day "extraordinary" maintenance of public spaces.

And it's one of many examples that ought to support my point that despite national measurement reports from TPL, DC probably doesn't have the nation's "#2" park system.  See "How surveys based on gross data can be very misleading."

2. On my list of books to read and write about is Place-Keeping: Open Space Management in Practice, published by Taylor & Francis/Routledge, and the product of a European Union knowledge capture initiative on managing open space.

There is a companion website, Place-Keeping, maintained by the authors, which addresses in an ongoing way issues that were studied and discussed in the book.

3.  To reiterate the need for local governments to include contingency planning for county, state, or federal parks and open spaces located within their jurisdictions in their parks plans, for budget reasons, a number of states are threatening to cut funding for parks or close them altogether.

In New Hampshire, the issue is that the Governor vetoed the budget and so all agencies are operating on a budget line of one-half of their FY2015 budget.  This affects parks and fall-related foliage tourism ("Committee votes to keep state parks open," Manchester Union-Leader). Slate reports that tourism around the fall foilage season--not limited to the state's parks--generates $1 billion for the regional economy (although it's also threatened long-term by climate change).


Rogersville Mayor Richard Herston spoke on the ripple effect that would result if the parks are closed. He said about 10 percent of his town's budget comes from people visiting Joe Wheeler State Park.

Other states face similar problems.  For example, Wisconsin's state park system is slated to stop receiving funding from the annual budget ("Elimination Of Tax Funding For State Parks Approved By Budget Committee," Wisconsin Public Radio) even though no state park system in the US is fully funded by self-generated revenues, and budget cuts in Oklahoma could lead to parks closures or privatization initiatives ("State Parks in Danger After Tourism Department’s $16 Million Budget Cut," StateImpact, Oklahoma NPR). 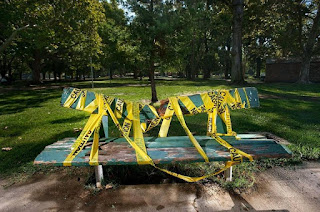 4.  In Sacramento (and other cities, such as Seattle) budget cuts for parks agencies in response to the 2008 recession had major negative impacts on the parks system, and citizens responded by approving property or sales tax levies specifically to fund parks and open space operations.

In the past, such levies funded capital improvements but not operations.  The Seattle Times editorialized unsuccessfully against the property tax levy in Seattle because it was intended primarily for operations.

The Sacramento Bee just reported ("Don’t forget about Sacramento’s parks") on the positive impact of the sales tax funding for the parks system, but mentions how with the park system still growing, each new facility adds demand for maintenance, outstripping the monies raised by the sales tax.

thank you very much for the contribution ^click it...: https://www.dosepharmacy.com