The state of "broken windows" versus "problem oriented policing" strategies in 2016: Part 2, what to do

Providing long term approaches will reduce crime in a more structural and structured manner compared to the results of short term responses, other than short term responses likely catching the least adept of the current cohort of active criminals (for example, "Two men sought in rash of D.C. armed robberies"  and "In DC's homicide spike, a new trend: Some involve past violent offenders,"Post--although I don't see how this particular pattern in homicides is "new") being apprehended and imprisoned.

Usually what is going on when crime spikes upward is that a "new" group of active crime perpetrators commits a bunch of (pattern) crimes, the police recognize the pattern, and eventually the criminals are apprehended, and in response, the crime rate drops.  It's a recurring, and at least to me, common cycle.

What to do long term.  Being introduced to the work of Ronald Clarke and others makes me realize that even if crime spikes tend to be recurring and eventually suppressed, more systematic and structural approaches can have substantive long term positive impact on crime reduction.

In "Crime time re-revisited: a set of programs focused on reducing crime" I listed nine items.  That is the basis of this expanded list.

1.  In the longest term sense, there should be a "Marshall Plan" approach to interdicting poverty in those areas of the city with persistent poverty and unemployment.  I've been meaning to write a position paper on this, and I'll get around to it sometime.  The point is to provide a rich network of civic assets and resources, not unlike the Settlement House programs dating back to the 1890s and the Progressive Movement.

My sense is that, at least in DC, we are spending billions of dollars each year -- on police, fire and emergency services, criminal justice, jails and prisons, schools, health care, welfare, etc. -- just to keep people roughly in the same place.  We need to upend how we use public resources to generate the kinds of preferred outcomes that we say we want but aren't getting.

In "State of Tennessee public safety plan as a way forward to link #BlackLivesMatters agenda with crime dampening" I wrote:

One of the problems that many people ascribe to the #BlackLivesMatter agenda is a kind of "nullification" as it relates to crime ("Black Lives Matter should also take on 'black-on-black crime," Washington Post).  To an outsider, it appears as if there is a kind of preconceived notion within the movement that anything "the government" does concerning crime and public safety is anti-Black and moreover, unjustified.

While I can see why many people would have strong reason to believe that, it is in fact a stretch or overstatement.  There is no question that the current paradigm isn't working ("Police misconduct and grand juries: a separate prosecution and grand jury system is necessary" "How police departments become corrupt," and "Police officers aren't always the best placemakers").

But at the same time there is no question that there is crime and it disproportionately impacts low income communities and people of color.

I believe that communities need a strong agenda for dealing with crime while recognizing that the public safety agenda is often built on a racist foundation, and much more resources need to be put towards community improvement, simultaneous with and not subservient to "order maintenance."

2.  I do agree that there is a need to have better data on crime and prosecution ("Activist Sues DOJ for Crime Stats in Capitol Hill Neighborhood," NBC4) for the entire city and that ideally, DC would control criminal prosecution of local crimes rather than the federal government doing so as it does currently.

But at this time, I don't think that the city's new Attorney General is adequately focused on building the capacity of the agency to justify doing so.

3.  To move the city forward in this policy area, we need to create a city "criminal justice" master plan that would mediate between all the various stakeholders within the current system.

It would also clarify between the citizens and the various agencies, including but not limited to the MPD, the city's primary police agency and under the control of the local government, an understanding of the responsibilities and duties of each.  The way it works now, DC citizens have virtually no input on many of the agencies with policing authority in the city.

WMATA's Transit Police definitely need to be included, both ways, in terms of providing peace of mind to people riding transit and the recent rise in terrible crimes (murder and assault) on the system, mostly in DC, but not limited to it.  (The Park Police and Transit Police have authority in DC, Maryland, and Virginia, while the other agencies have more limited powers and authority.)

Years ago, I called positive attention to the Seattle policing master plan ("Seattle Police Department master plan is quite impressive") but charlie pointed out it didn't say much about how to reduce crime. And clearly it wasn't enough to keep former Mayor Greg Nickels in office ("2013's #5 Most-Read: Seattle's dirty little secret of downtown safety," Crosscut).

6.  And focused crime suppression programs related to crimes of violence such as intimate partner violence, murder, gangs, etc.  This would include more general monitoring of ex-offenders, along the lines of programs like those once successful in Boston.  See "Straight Outta Boston" from Mother Jones Magazine.  And this particular element of Mayor Bowser's public safety agenda was vociferously opposed by activists.

7.  Instead of "All Hands on Deck" events DC needs to launch its own version of Los Angeles' Community Safety Partnership, which embeds police officers and implements community programs in various public housing developments in the Watts community.

8.  Provide specific programming for the mentally ill rather than expect police to be first responders.  Many of the people caught up in the criminal justice system have mental health problems.  I was surprised to see that Los Angeles is creating a special jail unit to deal specifically with inmates with mental health issues ("LA County to relocate some inmates, build jail to treat the mentally ill," Los Angeles Times.  Police officers are put in a terrible position of being the default responders for mental health problems. 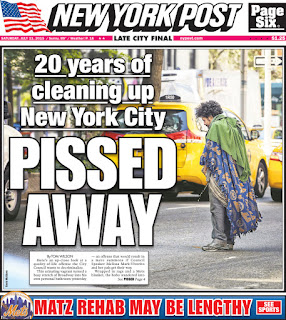 This guy in New York City (image at right), who repeatedly urinates in public ("20 years of cleaning up NYC pissed away," New York Post), is an example of someone with serious mental health issues.

Arresting and incarcerating him doesn't address his underlying problems and won't cure him.

At the same time I don't think this is a "quality of life" crime that should be ignored.

9.  Address somehow the scourge of drugs, such as synthetic drugs which are causing major problems in many cities across the country not just DC ("Man charged with killing pedestrian took drugs before hijacking bus," WTOP).

10.  Stop the revolving door of criminals getting released time after time, as the violence of their acts escalates, until they are stopped once they commit an ur crime of violence and the door is closed ("How an accused rapist kept getting second chances from the D.C. criminal justice system," Washington Post).

11.  But this also requires way better support and interdiction systems so that perpetrators stop escalating their criminal activity ("A boy is killed for 'absolutely no reason' while waiting for the Metro," Post).  Yes, programs for youth need to focus on rehabilitation ("We need to steer D.C.'s young people away from crime earlier," Post), but not everyone works well with the "soft approach."

- Year Round Schooling, so that there aren't such long breaks in the summer
- and/or Enhanced, Enrichmment-Focused Summer School programs -- they have to be great, not just more traditional lecture-based instruction.

13.  And create year-round cooperative high school education programs that could include externships and income for high school aged youth.  This is complementary to the next recommendation.

14.  Besides a bottom to top review and revamp ("Can a troubled summer jobs program give D.C. the results it wants?," "D.C.'s summer job program starts — and the heat is on Bowser" and "D.C.'s Summer Youth Employment Program," Washington Post), the city's Summer Youth Employment Program, especially because many of the participants are post-high school age, could be extended to an all-year program, comparable to the Federal Government's Vista and comparable programs and other job development and workforce readiness programs.

That's probably a better strategy and more palatable than "paying criminals not to commit crimes" ("D.C. Crime Bill Would Pay People to Avoid Committing Crimes," New York Times), which is based on an interesting program in Richmond, California. 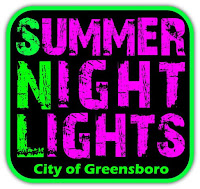 15.  And recreation centers, parks, and libraries in areas of greatest need should have more extensive program and be open for longer hours in the summer, say til 11pm.  Los Angeles ("Crime falls 40% in neighborhoods with Summer Night Lights program," Los Angeles Times, Greensboro, NC, and Muskegon, Michigan, among other places, have such programs.

From the Muskegon Chronicle article "Summer Evening Recreation Program at Muskegon High School gets young people off the streets":


“It was a lot of fun last year and we expect more this year,” Adkins said of a program that drew on average 400 youth on any given night. “We encourage parents to come with their younger children. This is for anyone in the Muskegon area, not just the city or Muskegon school district.”

There are also "midnight basketball leagues."

16.  Plus, why do outdoor pools start closing in mid-August, shouldn't they stay open through September?

significant drop in crime in Norfolk VA attributed by chief to a new focus on "hot bodies" -- gang members, people with outstanding warrants -- likely to commit crimes, not just on "hot areas"

It reminds me of an article I read more than 20 years ago in Chicago Magazine focusing on a particular precinct with super high crime rates and a discussion about how most of the crimes were committed by a very small number of people.