The state of "broken windows" versus "problem oriented policing" strategies in 2016: Part 1, theory and practice

Last week, charlie shared with us a talk, "Criminology and the Fundamental Attribution Error" by crime researcher Ronald Clarke, recounting his 50 years of experience in the field, on the occasion of his receiving the Stockholm Prize in Criminology.

charlie also constantly reminds us that a good deal of the rise in popularity of center cities over the past decade especially ("Americans are paying more to live in the very places they once abandoned," Washington Post, 2016) has been facilitated by getting a handle on public safety and the result of big drops in urban crime rates ("Don't Fear the City: Urban America's Crime Drops to Lowest in 40 years," Atlantic Monthly, 2011).

My first reaction on reading it, despite all I've written on the issue, is that I don't know s*** about crime.  From the speech:


... “nothing works” in controlling crime was the prevailing wisdom – not improved policing nor correctional treatments, whether punitive or reformative. It seemed important to find some alternative approach and, with the lessons of the absconding research fresh in my mind, bolstered by U.S. studies of “defensible space” (Oscar Newman 1972) and “crime prevention through environmental design” (C. Ray Jeffery 1971), I resolved to explore the scope for reducing opportunities for crime.

Together with my colleagues, in particular Patricia Mayhew and Mike Hough, our section produced a report, Crime as Opportunity (Mayhew et al. 1976), which assembled evidence from a variety of sources showing that opportunity plays a vital role in the
occurrence of crime, and which argued that reducing opportunities for crime could become an important part of crime policy.

This is particularly prescient because in New York City, the Inspector General of the NYPD released a report calling into question the precepts of "Broken Windows" policing ("NYPD Watchdog Shatters Bratton's 'Broken Windows' — Now What?" and "The Unnatural (and Possibly Doomed) Symbiosis Between Bills de Blasio and Bratton," Village Voice) which is supposed to be focused on "reducing crime opportunities" but as crime has dropped, at least in NYC, has been focused on "arresting people for committing low-level crimes" such as having an open container of alcohol, accompanied by a high level of police stops -- "stop and frisk" activities -- in higher-crime areas. From the Voice:


Looking at six years of NYPD summons and arrest data, the IG found zero evidence to suggest that arresting and issuing criminal summonses to people for so-called "quality of life" offenses — riding their bikes on the sidewalk, drinking beer in public — leads to a drop in more serious felony crimes. On its face, that conclusion contradicts the central tenet of what has come to be called "broken windows policing": that by coming down hard on minor offenses, police can set a tone that discourages serious violent crime.

Nothing works vs. problem-oriented policing.  I think how we learned the wrong lesson in the 1980s that "nothing works" when the real lesson was that patrol-car-based reactive policing was not effective in reducing crime and that we needed to change how police officer time and related resources were being deployed in order to have significant effect, the same goes with "Broken Windows" versus "Problem-Oriented Policing."

The Broken Windows idea dates to a 1982 article in Atlantic Monthly Magazine.  It was many years later that the concept was effectuated into practice by William Bratton.

-- "PROBLEM-ORIENTED POLICING AND THE POTENTIAL CONTRIBUTION OF CRIMINOLOGY" by Ronald V. Clarke (1997)

Arrests and arrest statistics vs. problem-oriented policing.  The focus shouldn't be on arrests per se -- although arrest or issue summonses when they commit crimes sure, and even for a fair number of "quality of life" type crimes -- but on reducing opportunities for crime.

Back when crime was high/higher, there was more of a congruence between arrests and interdicting situational and opportunistic factors.  Now, many but not all "quality of life crimes" have a tenuous link to more serious criminal activity.

Furthermore, what we might call spurious arrests have negative consequences in terms of building a trust relationship with communities that get the idea that they are being occupied, not served, by the police department.  (Note that the perception of police departments is dependent on your position within "street" vs. "middle class" culture as discussed by Elijah Anderson in Streetwise and Code of the Street). 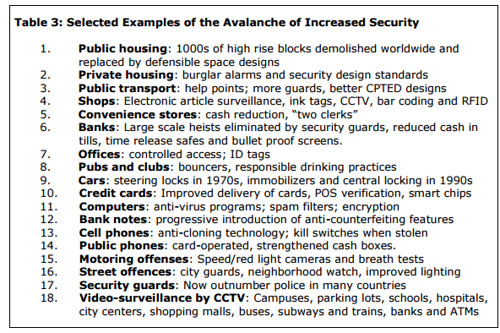 Reducing opportunities for crime. Clarke makes an important point about the drop in crime over the past two decades as likely the result of interventions focused on reducing various crime opportunities, mostly led by the private sector. From the speech:


Hardly anyone recognizes – whether politicians, public intellectuals, government policy makers, police or social workers – that focusing on the offender is dealing with only half the problem. We need also to deal with the many and varied ways in which society inadvertently creates the opportunities for crime that motivated offenders exploit by (i) manufacturing crime-prone goods, (ii) practicing poor management in many spheres of everyday life, (iii) permitting poor layout and design of places, (iv) neglecting the
security of the vast numbers of electronic systems that regulate our everyday lives and, (v) enacting laws with unintended benefits for crime.

Situational prevention has accumulated dozens of successes in chipping away at some of the problems created by these conditions, which attests to the principles formulated so many years ago in Home Office research. Much more surprising, however, is that the same thing has been happening in every sector of modern life without any assistance from governments or academics. I am referring to the security measures that hundreds, perhaps thousands, of private and public organizations have been taking in the
past 2-3 decades to protect themselves from crime.

This has involved every sector of modern society – shops, banks, schools, colleges, hospitals, offices, transport systems, the airline industry, fast food restaurants credit card companies, motels, and any other business or organization that is open to some form of criminal exploitation – which is all of them. ...

This change in security practice is so strong and widespread and is happening in all Westernized countries that some criminologists, especially Jan van Dijk, Nick Tilley and Graham Farrell have claimed that it explains the substantial crime drops that most of these countries have experienced in recent decades (see for example Farrell et al. 2014).

Frankly, because the labor union has traditionally taken the "management is always wrong" approach for a long time I've had a hard time finding their positions credible.  But maybe the officers and management are both wrong, and the police department focus is not systematic enough when it comes to addressing crime reduction strategies in focused ways.

I've certainly made that point in pieces like "Night-time safety: rethinking lighting in the context of a walking community," and "Crime prevention through environmental design and repeated burglaries at the Naylor Gardens apartment complex."

Problem-oriented policing and crimes of violence.  Similarly, a few months back Governing Magazine ran a great piece, "How High Point, N.C., Solved Its Domestic Violence Problem," about the approach a city has taken to reducing "intimate partner violence" in particular murder around domestic violence cases.

Since High Point developed their program, they have reduced the number of murders in this category to zero.  I think about that every time I see a story on the tv news about domestic violence related murders in the DC area, which are never-ending:

Probably what has happened is the "low hanging fruit" opportunities have been harvested and now much more nuanced strategies are required to keep crime and crimes of violence down, as super-predators may be less resistant to simplistic situational strategies, and cities like Washington haven't responded adequately ("Baltimore, DC, Chicago drove rising murder rate in 2015," KUTV).

after an argument on a neighborhood e-list, I found this piece, a book chapter from the mid-1990s, that was one of the early pieces looking at "space, place, and crime" wrt liquor selling establishments (taverns/bars and liquor stores) in Chicago:

More wrt property crime, but also other types of crime.