In my framework for transit planning, I define the center city transit network in terms of three subnetworks; primary; secondary; and tertiary.  These are not mode specific.  From past writings (but with some edits):


A framework for an all encompassing DC-MD-VA transit network

Washington Metropolitan Transit Network: WMATA subway system; ferry system if added; cross-jurisdictional bus rapid transit; commuter services oriented to moving people between the jurisdiction and major job centers within the region, across jurisdictional boundaries (i.e., OmniRide from Prince William County, which provides commuter-oriented service to Metro stations and job centers, with an end point in DC [and back] or the MTA Commuter buses).

Suburban Primary Transit Network: transit systems operated by Counties and Cities in the Washington region providing bus, streetcar, and light rail service within the suburbs, and connections to stations within the regional transit network. Transit service in this category is classified by speed and destination. 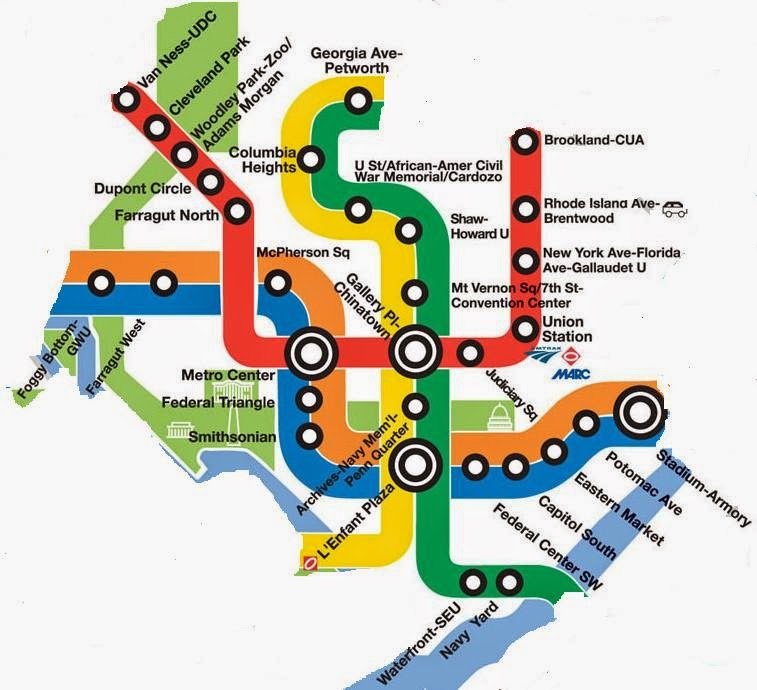 My original definition of the DC primary transit network did not include the Navy Yard and Waterfront Stations on the Green Line, but as those areas redevelop, they are included, bumping up the number of stations in the primary network to 31 from 29.


The Tertiary transit subnetwork is focused on intra-district mobility, getting between home and the supermarket, restaurants, transit stations, and neighborhood commercial districts.  Also see "Making the case for intra-city vs. inter-city transit planning."

To do this sustainably can be tough for locations outside of the one mile catchment area of such destinations. 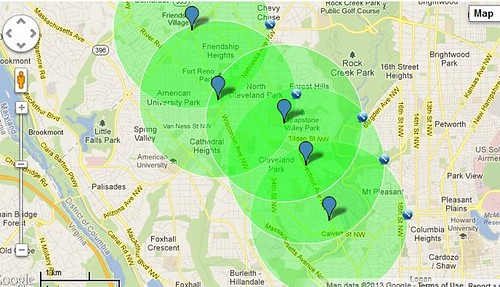 This map shows one mile radii from Metrorail stations on the western leg of the Red Line in Upper Northwest Washington, DC.  Many parts of the community west of the stations are outside of a typical catchment areas. 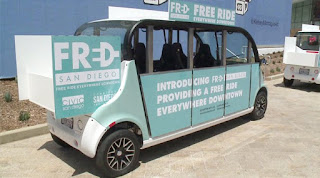 
Operated by New York-based Free Ride, the all-electric, open-air vehicles will cruise downtown from 7 a.m. to 9 p.m. weekdays and later on weekends. You can either stand at a corner and wave down one of the distinctive blue, five-passenger cars or download an app via the company website, thefreeride.com/fred, and request a driver. The goal is to pick you up within eight minutes — and alleviate the anxiety of finding a parking place.

The idea is to get people to park and move around the district on foot, with some assistance from secure transit.

Part of the reason this service can succeed is that it will be paid for in part from parking meter revenues, although the service operator seems to believe that long term, they can pay for the operation on advertising and sponsorships.


A service like this was attempted on Capitol Hill right around when the Washington Nationals stadium opened, in hopes that game attendees would patronize Capitol Hill businesses before or after the game, but it didn't last, in large part because it relied on sponsorships, not a dedicated funding stream.  It was run by a company out of Annapolis ("Annapolis eCruisers gets new ownership, new plan," Annapolis Capital-Gazette). 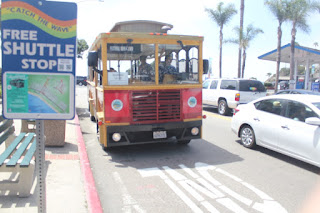 One OCTA program provides funding to local communities for intra-city transit service, shuttles mostly and typically focused on tourists and employees, designed to encourage people to park and get around from place to place within the city by transit.  The funding source is a county sales tax add-on earmarked for transit. Most often, these services are free.


Community Based Transit/Circulators (Project V).  This program establishes a competitive program for local jurisdictions to develop local bus transit services such as community based circulators, shuttles and bus trolleys that complement regional bus and rail services, and meet needs in areas not adequately served by regional transit.

The OCTA program is a good model for cities like DC in terms of modeling a funding process for the creation and maintenance of neighborhood focused "tertiary transit services," Depending on the need, it could fund either fixed route services, like how it is used in various Orange County cities to serve the tourist economy,  or simpler, more flexible services designed to serve residents, not visitors, as a way to promote sustainable mobility and to manage scarce parking resources and traffic (see "Understanding why Upper Northwest DC residents don't buy into the sustainability mobility paradigm").

Note that Tempe, Arizona's Orbit system is another model, a fixed route program with flag stops, but focused on serving residents, not tourists.

Areas of DC where I could see "FRED" type services being useful would be Capitol Hill, Takoma, Cleveland Park, Brookland, and East of the River, for areas of the community outside of the typical walking distance of transit stations and services. 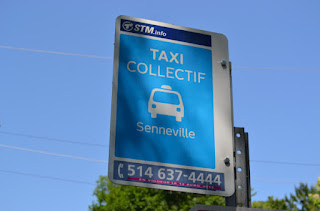 The shared taxi service in the Senneville area connects to bus lines, a railroad station, and the local college. Photo from "STM enhances collective taxi in Senneville," Metro Montreal.

Shared taxi services as another model.  Note that "shared taxi services," such as the taxibus program at the outer edges of Montreal's transit system, are another example of a way to provide tertiary transit service, as are jitney type services like Bridg.

But these services involve fares--cheaper than Uber or Lyft, but more expensive than a typical bus fare--and usually require reservations.

Regularized funding is a must for community focused tertiary transit services.  To succeed, these programs need regularized funding, from sources like parking meter revenues, dedicated taxes, etc.  Sponsorships and advertising aren't enough, especially at the neighborhood scale, where significant funding isn't likely to be available from small businesses.

One size doesn't fit all: Fit the program to the need, not the need to a static program.  Flexibility is also a necessity.  Traditional fixed route services, and large or even small buses, aren't necessarily the right solution for tertiary transit service.  What works depends on the nature of the trip and where the area fits within the transit framework.  A solution appropriate for a center city is likely unworkable in a suburban community.

I thought the capital hill one was run by a bar. I remember taking it once. Nice service but not usable on game because of the volumes.

Would be very interesting if combined with driver automation as they are doing at National Harbor.

Various buildings use jitneys/vans as well, perhaps plugging them into phones will make the service more usable.

Also, track down the owner of DecoBikes in Miami and the wife of the Mexican president. Fun stuff.

you read way more than I do I think... because of your cryptic clue though, I learned I am out of date about Deco Bikes in Miami Beach at least, that they got sponsorship by Citibank, renamed it the same as in NYC, and switched the bikes.

2. great find on the McMansion piece. I was looking at a house in Takoma on Sunday (just to keep apprised of our local market) and I was walking around the block on Fern, and there was a string of houses, some four square, some big bungalow, all of the same proportions.

I was thinking I just wished that when bungalows and cottage style houses get supersized in my neighborhood, that they would just convert them into properly sized four squares.

Some of the bungalows that are supersized still as bungalows get almost a full second floor and a big projection over the porch. Really out of sorts.

Thanks again for this. I will mention it in a blog entry I think.

Yeah, I thought that was a useful guide.

Would be interesting to do an urban counterparts.

Again, disclaimer, not a zoning expert but would be helpful if new building got bonus based on good design and doing up the back of the buildings as well.

a fred-like service in Tampa

FRED is successful, will be expanded:

I think this is a really good article. You Ride Denver To Aspen Limo Car service Denver To Breckenridge Car Service information interesting and engaging. You give readers a lot to think about and I appreciate that kind of writing.

I think this is a really good article. You Ride Denver To Breckenridge Car serviceTransportation from Denver to Breckenridge information interesting and engaging. You give readers a lot to think about and I appreciate that kind of writing.

When I read an article on this topic, 메가슬롯 the first thought was profound and difficult, and I wondered if others could understand.. My site has a discussion board for articles and photos similar to this topic. Could you please visit me when you have time to discuss this topic?