Making the case for intra-city (vs. inter-city) transit planning 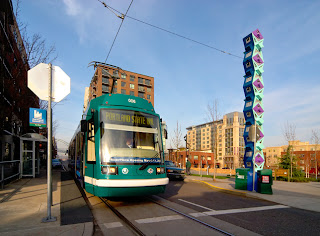 Portland Streetcar at Jameson Square. Image from Portland Ground. Note that an ongoing discussion on this topic with Nigel Foster helped shape this entry.
Sparked by low ridership, continued financial problems and the impeding raise in fares, in September there was a piece, "Derail the People Mover," in the Detroit News by Bill Johnson, calling for an end to the city's People Mover. Separately, there are initiatives to develop light rail service along Woodward Avenue, serving Detroit and Oakland County.
My reaction was that the People Mover's general failure in Detroit has masked key distinctions in thinking about transit, over two scales, (1) intra-city transit and transit's role in repositioning center cities as desirable places to live, locate businesses, and visit, versus(2) inter-city transit, that is bringing people to and from the city.
Typically, cities haven't been good proponents of intra-city transit subnetworks, especially with economic development considerations, because (1) transit is seen as a service of last resort, for people who can't afford cars; and (2) because usually transit service is provided as part of a regional service and in that context service within the center city is not necessarily prioritized, even though center city residents tend to make up the greatest proportion of riders.
Detroit had a lot of other economic revitalization problems before the People Mover was created, and in such an automobile-centric place, rebuilding the center city around transit is counterintuitive, so it's probably not a good example of how these kinds of focused transit services can help spark Downtown improvement, but it led me to begin thinking about a typology of these kinds of intra-city transit services:
Bus
1. Bus transit malls--Portland, Minneapolis (Nicollet Mall), Denver
2. Circulator bus services in various iterations--the latest have modern, more comfortable buses, better branded services, and more frequent headways (DC, Baltimore)
3. Various lane priority schemes
Rail
3. People Mover type services (Detroit, Miami) [note that Nigel points out that such services within airports demonstrate that campus serving opportunities for people movers can make sense, such as for a hospital center spread out over many acres, like the medical center in Houston)
4. Monorails (earlier truncated line in Seattle, more modern service in Las Vegas, Singapore, Kuala Lumpur and other systems in Asia--Nigel, being in New Zealand, has experience with these systems too, which mostly have a limited number of stations)
5. Heritage streetcar systems (McKinney Street, Dallas, Little Rock, Tampa, etc.)
6. Modern streetcar systems (Portland, Seattle, plans for Washington, DC and Arlington, Virginia and many other cities)
Three articles over the years in the Pittsburgh Post-Gazette by Bob Firth, "The Long Squiggly Line That's Killing Our Transit System (and News of a Brazilian Cure)," "The Big Leap in Transit We Didn't Get -- But Could" and "The Next Page: Ditch the Port Authority -- and start over fresh," explain the value of the focused "circulator" concept but more in terms of the benefits to transit efficiency, not so much on the economic development and placemaking value. Similar to how bus rapid transit is being marketed, by distinguishing the circulator buses with more modern, attractive, comfortable buses versus more traditional, value engineered buses, bus service, at least in the context of circulator service (but not traditional bus service), has been repositioned as a premium service. Images from the first Bob Firth article, which is primarily a set of illustrations explaining what a Circulator does.
Bus transit malls are good for focusing transit services and making people aware of where to go to catch the bus, but they don't always work out on placemaking considerations, given the noise and exhaust and dominance of the streetscape by many large vehicles. This wasn't helped by early iterations which had "heavy" bus shelters which also overwhelmed the streetscape. Top photo: Nicollet Transit Mall, Minneapolis. Photo by Jerry Holt of the Minneapolis Star Tribune. Bottom photo: Old Portland bus mall shelters. Flickr photo by Jason McNuff.
Focused transit services downtown often start with transit malls, which serve both intra-city and inter-city functions. Circulator bus systems are the next generation of this kind of service, more focused on intra-city service, and a lot cheaper to implement than streetcars.
The question remains however on whether or not bus-based Circulator systems can spark economic development the way that fixed rail transit does. It will be interesting to see how this works in Baltimore as opposed to DC, where it's harder to separate out the impact of subway service on economic development vs. any impact that might come from enhanced bus service. Top: Las Vegas Monorail photo on Flickr by Richard Pilon. Detroit People Mover photo below by cmu chem prof from Flickr.
People Movers and Monorails haven't really worked out in terms of sparking economic development. The Detroit People Mover never had that much ridership, while the Miami Metromover, with 22 stations, gets more than 30,000 daily riders. The Las Vegas monorail system went through bankruptcy and the Seattle one is truncated, and the above-ground systems, while not impeded by traffic, can be a drag on the viewshed.
The Las Vegas monorail may become successful over time, because of people's desires to get between various casinos in the city--on the other hand, if people stay within their hotel-casino complexes, maybe there isn't that much demand for this kind of service. Given that roughly 2,000 people ride the the monorail daily, maybe that's the case.
Maybe the relative lack of success has to do with their being in the air, just as the skywalks in Minneapolis, while successfully moving people between buildings in bad weather, end up removing people from the street, so success comes at the expense of vitality at the street level.
Streetcars (and bus-based circulators) integrate better into the built environment than monorails and people movers, but their in-street operation creates a lot of opposition (at least by motor vehicle operators) who see the addition of streetcars as a competitor for scarce street space, even though by comparison a streetcar can carry 100 or more people in the same space as 3-5 cars.
Heritage streetcars are a variant, more focused on tourism and out-of-region visitors rather than repositioning an area within the regional landscape for residential choice and commerce. The Little Rock streetcar seems to have had more success in terms of sparking economic development than the Tampa equivalent. Likely this is due to greater focus and integration with economic development revitalization planning in Little Rock versus the planning in Tampa, which provides service to Ybor City, a major entertainment and tourist destination. Streetcar at the River Market (a newly constructed public market which is also very successful in its own right) in Little Rock, Arkansas. Flickr photo by Skyline Scenes.
Articles about streetcars in Portland and Seattle and how they respectively helped focus redevelopment of the Pearl District in Portland and the South Lake Union district in Seattle, supporting billions of dollars of economic development, are numerous. The experiences there demonstrate that when intra-city transit systems are developed in a purposeful way to promote economic development, placemaking, and the repositioning of the center city as a residential and business location of choice, they can have incredible return on investment.
-- Portland Streetcar
-- Understanding the Impacts of Transitways The Hiawatha Line: Impacts on Land Use and Residential Housing Value, Center for Transportation Studies, University of Minnesota, research brief, full document
-- Street Smart: Streetcars and Cities in the 21st Century, Reconnecting America
This page from the Oakland Streetcar webpage has links to a number of articles and reports on economic impact from streetcars. "Portland streetcar success has fueled interest elsewhere" from USA Today, two articles from the Seattle Times, "New streetcars no trolley folly for Portland," and "A streetcar to inspire, in Portlandthis case study on the Portland streetcar provide information on the links between well defined intra-city transit systems and local economic development and placemaking.
The typology is important because there are so many plans for streetcars around the country, in various stages of development, including cities like Cincinnati, New Haven, San Antonio, Baltimore, Oakland, Atlanta, Los Angeles, etc. that it's almost impossible to keep track of all of them.
But because so many people, especially elected officials, see transit as a service of last resort, not as a positive force that supports a more sustainable, urban lifestyle where transit, rather than automobility, complemented by walking and/or bicycling, is the primary means for getting around the city, getting forward movement on such systems--despite the successes in Portland and Seattle--is very difficult.
Even though New York City has typified a transit-centric lifestyle and mobility paradigm for many years, many people have a hard time grasping that it is possible in a country that has prioritized automobility for the past 90 years.
Even so, Washington, DC and the Wilson Boulevard corridor in Arlington County, Virginia, as well as the areas served by the streetcar in Portland (Nob Hill, Pearl District, Downtown) show that this kind of pro-urban lifestyle is exportable to more places in the U.S. than previously thought.
But it's still a struggle (even in places like Washington and Arlington, which are part of a region where the subway--heavy rail transit--is very successful).
While in Detroit they aren't thinking about what else needs to be done in order to refocus development around transit and downtown, New Haven provides another example of disconnects over planning for the long term.
The city just received a planning grant from the Federal Transit Administration for a streetcar study, but the City Council won't appropriate the 20% match that is required. See "FORUM: New streetcar system an investment in future" and the negative counter, "FORUM: Trolley nice to have, but city must focus on priorities," from the New Haven Register.

This is a nice post.
City transportation is a significant column for the personal satisfaction of residents in a city. Presently, in the majority of the urban areas, open and private street transportation are the principal method of driving and coordinations.
"generic ed drugs"