The Washington Business Journal has an interesting article, "Exclusive: Here's what Prince George's pitched for HQ2 — and why it lost," about why Prince George's County's bid for the Amazon second headquarters wasn't one of the short listed sites, even though DC, Montgomery County, Maryland, and Northern Virginia (Arlington, Fairfax, Loudoun Counties) each made the final Top 20.


Weeks after being shut out of Amazon's short list of contenders for HQ2, Prince George's County learned Wednesday morning why it did not make the
cut: The county doesn't have a large enough pool of senior-level software engineers.

... The answer brings some closure to a multifaceted effort by Prince George's to attract Amazon's second headquarters with a strong proposal that county officials say met all of the online giant's requirements in terms of talent, land and transit.

The county's nearly 120-page proposal, obtained by the Washington Business Journal through a Freedom of Information Act request, reveals that Prince George's pitched College Park and Greenbelt together as a way to fulfill Amazon's plans to develop 8 million square feet for 50,000 employees.

In 2005, I interviewed for an economic development job in Hyattsville, a few miles south of College Park and the University of Maryland, and the main point I made was that they looked for their economic energy to emanate from DC up the Rhode Island Avenue/US 1 corridor, and yet the University of Maryland is a leading research university, and that if you did a Google search on "Prince George's County" and "creative economy" (a term used by Charles Landry and others) you got fewer than 100 hits.

One of the things I suggested was trying to get the University and Prince George's Community College to relocate their arts related academic programs to Rte 1 in the "Gateway Arts District"--imagine the College of Art anchoring the arts district, etc.

Another was that they should strive to be great, for example by changing their town slogan from "A good place to live" to "Maryland's Rising Star."

A few years ago I wrote a couple pieces about how College Park and the Prince George's County economies are crippled by the city's adamant desire to not be a college town, even though big college towns like Ann Arbor, Madison, Cambridge, and Berkeley are awesome (and small towns anchored by colleges can be great too, such as Walla Walla, Washington; Chestertown, Maryland; and Shepherdstown, West Virginia).

-- "To be a great city, College Park Maryland needs some "there", it needs a center," 2013
-- "More Prince George's County: College Park's militant refusal to become a college town makes it impossible for the city(and maybe the County) to become a great place," 2015
-- "College town follow up: alumni as residents and contributions to community capital," 2015

To be fair, it is the case that those area communities are starting to figure out that that this is important ("How Wallace Loh is impacting development in College Park," Washington Business Journal; "University of Maryland is bringing upscale hotels," Washington Post). 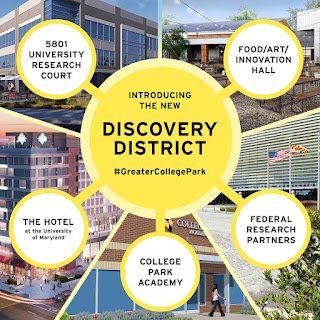 President Loh has made a difference, reversed the university's previous animus about a more direct campus routing for the forthcoming Purple Line light rail ("UMD and City of College Park officials show excitement for Purple Line," Diamondback), the University and developers are creating what is being called the "Discovery District," north of the campus, which will be a mixed use  academic, research, and commerce district ("University of Maryland debuts Discovery District," press release), etc.

In my writings about the quest to land the Amazon project, I mentioned that in any case, the process was a good opportunity to objectively assess where a community is, to do what's called a SWOT (strengths, weaknesses, opportunities, threats) analysis, to figure out where it can do better. 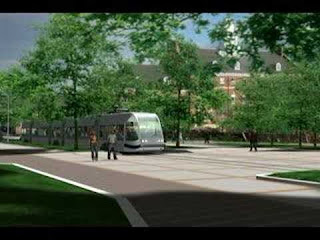 Rendering showing a Purple Line light rail train on the routing through the University of Maryland campus.

Prince George's needs to do a deeper re-assessment. Which I have written a fair amount about including shifting their development paradigm around transit:

and the PG-related recommendations in my 2017 series of Purple Line articles including: