Community associations, centers and hubs: organizing at what scale

When you think about it, the discussion about space and facilities needs for artists and artistic disciplines in "Arts, Culture Districts, and Revitalization" is comparable to thinking about organizing community more generally, at various scales.  From that blog entry:


In their paper on creative infrastructure, Cultural Infrastructure: An Integral Component of Canadian Communities, the Creative City Network of Canada outlines six types of creative space, and four of the six: multi-use hubs; incubators; multi-sector convergence projects; and production habitats; are anchors, a set of either cross-disciplinary or discipline-specific facilities and programs that support the development of art, artists, partnerships, networking, connections, and cultural production.

Building the capacity of artists and organizations through these types of investment supports local economic and community building objectives, and improves the likelihood of success for all types of cultural initiatives. There are many examples of these types of facilities across North America (just not in DC) that serve as examples that you can consider for your own communities. 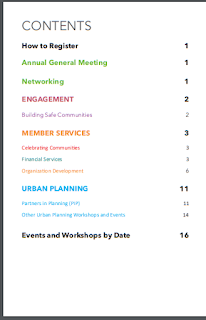 While I intend to do a follow up interview and a separate blog entry, the example is relevant here.  The city has a deep network of community/neighborhood associations--151 to be exact and of these 95 have "planning committees."

They are supported by a capacity building system through the pan-community organization Federation of Calgary Communities, which has two urban planners on staff to assist neighborhood groups, a wide ranging technical assistance and training program, and even an affiliation agreement with a community credit union that members of the associations can join.

Interestingly, most of the community associations have physical buildings as centers.  I think the associations tend to run the kinds of community recreational centers that in other places would be run by the city or county.

2. LGBTQ community in Austin, Texas. Mostly, we think of community associations as being geographically specific. I've written about urban church matters ("Churches, community, religion, change"), and how megachurches are an example of organizing a church on the metropolitan rather than the neighborhood scale.

There's an interesting article, "Does Austin Need an LGBTQ Center? A look at the city's lack of a queer community hub," in the Austin Chronicle suggesting the need for an LGBTQ "community hub," which is another example of organizing "community" at a wider scale. From the article:


The histories of queer communities across the country are diverse, but many major metropolitan areas house LGBTQ Centers that connect individuals to the greater community as well as resources they might be in need of – such as HIV support, case management, mental health services, and queer-friendly job listings. They also provide a safe gathering space and often feature local LGBTQ+ artists.

But despite plenty of attempts to create one, Austin still does not have a center. As it turns out, efforts have been made to fundraise for one on multiple occasions, and a few even got off the ground. In 1996, Cornerstone – the city’s last center – opened its doors. The space housed the queer-friendly Metropolitan Community Church of Austin and queer youth organization Out Youth. Originally, the plan was to provide space for other nonprofits as well as host parties and events for the queer community. That vision was never fully realized, as Cornerstone closed just a year later.

Carrie Bills, one of Cornerstone’s founding members, recalls their fundraising efforts starting off strong, but says it just “petered out from lack of support.” She concludes, “It was difficult to get people together, to keep it up. And eventually it just, sadly, had to go.”

It's easier to organize specific communities when geography and space make simpler the defining the community.

DC's gay community had been centered around Dupont Circle, and Whitman-Walker Clinic and Center was a key anchor ("As others leave, Whitman-Walker moves to new luxury offices on 14th Street" and "How one nonprofit is using D.C.'s luxury rental market to serve its low income clients," Washington Post), along with the Lambda Rising, the LGBTQ-focused bookstore ("Book Store To End Chapter Of Gay Life," WAMU/NPR) and bars and restaurants.

As the gay lifestyle became less controversial, at least in forward thinking cities (e.g., "The Geography of Tolerance," CityLab) having "defensible space" and defined communities became less important.  But as the community dispersed, community-supporting institutions withered. The establishments that relied upon gay-relevant commerce have closed ("Sale of Phase 1 ends 45-year run of lesbian bar," Washington Blade), while Whitman-Walker survives because they own property and because as an institution their client base is not neighborhood-specific.

Maybe that's why it's difficult for Austin to develop a community hub for its LGBTQ community, because it is dispersed.  The article discusses that, in terms of "gayborhoods," which Austin doesn't have.  From the article:


... Gayborhoods formed across the U.S. during times of great crises for the LGBTQ community – when queer people were denied access to well-paying jobs, safety, and healthcare. Many community centers arose within these neighborhoods, particularly during the Eighties AIDS crisis. Austin’s exponential growth, however, didn’t begin until the mid 2000s, long after these crises had softened (or at the very least evolved into more subtle issues of neglect and homophobia). ...

The lack of a queer neighborhood not only means there has never really been a centralized push for a center, but also that any center that might be established now will likely be difficult to access for some members of Austin’s LGBTQ community.

According to the article, there are two efforts to create a hub.  One is more about creating a traditional physical facility, while the other is focused on stitching together a network of services, by better coordinating existing organizations. 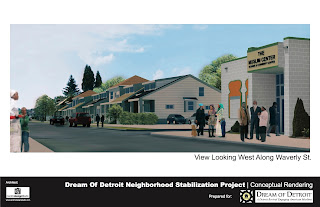 3. Dream of Detroit Muslim Community. Another example, which I haven't gotten around to writing about, is the development in Detroit of an Islamic community centered around its house of worship ("Can This Muslim Community Create a Model for Rebuilding Detroit?," The Nation). From the article:


Waverly Street, for all its blight, had one singular draw for a young, activist-minded Muslim couple: A few lots east of their new house was the Muslim Center, a mosque that had long served Detroit’s black Muslim community. By the time Crain and Gómez got there, it was the tenacious, healthy heart of a dying neighborhood. What had started in 1985 as a prayer room in an old bank building was by then an expanse of offices and classrooms surrounding a cavernous gym used for craft fairs and as a soup kitchen. The HUDA Free Clinic had moved across the street after outgrowing its first office, and clinic employees had planted rows of vegetables, fruits, and herbs—the HUDA Urban Garden—in an empty lot, providing clients with homeopathic remedies or, more often, free groceries. A new prayer room accommodated hundreds of worshippers, while the original masjid had become the Halal Jazz Cafe, the brainchild of Imam Abdullah El-Amin, a beloved leader at the center and one of its founders.

But while the Muslim Center had grown, the neighborhood around it deteriorated, and few of the people who prayed there lived nearby. ... To some people, though, this neglect offered an opportunity. Perhaps Waverly Street wasn’t blighted, but simply unimagined: a blank slate for an ideal neighborhood, one filled with Muslim families and Muslim-friendly businesses—albeit open to anyone—and with the Muslim Center as its spiritual and social core. The liquor stores and drug houses—two curses, they thought, of a struggling Detroit—would be absent, and the community so close-knit that crime would naturally fade away.

To mold this vision into reality, two groups—the Detroit-based Neighborly Needs and the suburban Indus Community Action Network, or iCAN—formed a nonprofit in 2012 called Dream of Detroit (tagline: “A Detroit Revival Engaging American Muslims”). They set their sights on 20 lots and started collecting donations, recruiting volunteers, and organizing fund-raisers within the metro area’s Muslim community. Crain took on a voluntary role as project manager (his day job is with MoveOn.org, and Dream is why he and Gómez settled their young family here. It is also why even the people who wondered how long they’d be able to hack it have begun thinking about moving there themselves. 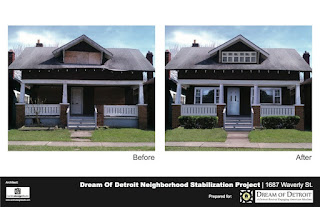 Space and neighborhoods in the "New Detroit" are now much more easily remade because there is so much vacant land.

There are still various religious communities which see advantages in living in close proximity.

Communities that see value in being able to reproduce this space have few roadblocks against proceeding, because there are few alternative uses clamoring for the space.

Conclusion. The basic question is about is "how to maintain a community?" at whatever scale. The difficulties of maintaining community organizations of all types aren't so aren't specific to LGBTQ communities, churches, or community and neighborhood groups.

Achieving and maintaining critical mass is difficult even in the best of circumstances. And so is maintaining interest.

That's what really struck me in the article about community associations in Calgary, in how the writer made the point that the most active associations tend to be in those neighborhoods grappling with big issues, especially development, and the neighborhoods where not much going on aren't particularly active.

There is the separate challenge of how to maintain communities that aren't geographically bounded.  Megachurches offer one such example which is worthy of study.

As an example, the Whitman-Walker Clinic is more of a service organization (a clinic, pharmacy, etc.) rather than a community hub.  Maybe in those places where more "hub type" programs are needed, they can be built around such an organization as an anchor.

I was so anxiuos to know what my husband was always doing late outside the house so i started contacting investigators and was scamed severly until i almost gave up then i contacted this one private investigator and he delivered a good job showing evidences i needed from the apps on his phone like whatsapp,facebook,instagram and others and i went ahead to file my divorce papers with the evidences i got,He also went ahead to get me back some of my lost money i sent to those other fake investigators,every dollar i spent on these jobs was worth it.Contact him so he also help you.
mail: premiumhackservices@gmail.com
text or call +1 7078685071