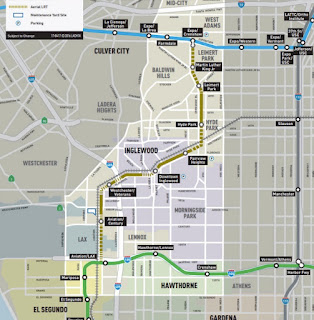 Curbed LA has a piece, "It’s called the Crenshaw/LAX Line, but Metro’s newest train won’t actually go to the airport," about how with the opening of the Crenshaw/LAX line next year, riders can get about one mile away from the airport, but the Airport's forthcoming People Mover system won't be operational until 2023 ("Fly through the Metro station connecting LAX to light rail" and "Construction kicks off on tram that will ferry you around LAX").

While yes, it's somewhat nonsensical that LAX didn't get the People Mover project and the rail transit project on the same timeframe.

The Airport does provide shuttle service from the existing transit station on the Green Line, Aviation/LAX, something the Curbed article doesn't really highlight, and it will shift this service to the forthcoming station, Aviation/Century, on the Crenshaw/LAX line next year.

But judging by the renderings, there's no question that the Aviation/Century Station will be a first class connection for services to the Airport.

It will have multi-modal services including an LA Metro Bike Hub.  (DK if it will also have spots for various car sharing options, it should.)

Interestingly, while the trip on the shuttle is free, you have to use a TAP card--the fare media card for LA Metro/LA County--because the trip is supposed to be linked to transit use.  This prevents people from driving to and parking on residential streets in the abutting neighborhood.

Meanwhile, in Boston, Massport, the operators of Logan Airport, are going to double the pick up and drop off fee for ride hailing trips to $5--although it will be half that for Pooled trips with multiple passengers, and they are changing the pick up and drop off point in order to reduce the congestion that ride hailing trips to and from the airport have caused ("Your Uber and Lyft ride at Logan Airport may soon change," Boston Globe). From the article:


The Massachusetts Port Authority, which operates Logan Airport, on Thursday unveiled details of its plan to rein in the thousands of Uber and Lyft rides clogging its terminals and narrow roads, and a fee increase that would make its ride-hailing charge among the highest of any airport in the country.

“We have to do something,” said Edward Freni, the agency’s director of aviation, expressing exasperation about the daily traffic jams at the terminals and in East Boston. ...

Perhaps the biggest change would be to how riders get to the terminals. Today, travelers heading to Logan are dropped off right outside their terminals, while those leaving Logan are directed to dedicated pickup spots in adjacent parking lots to meet their drivers. Massport’s plan, which it has been considering for months, is to instead direct both pickups and drop-offs to the airport’s central parking garage, with an exception for riders with disabilities, who would still get curbside service.

The locations would require a walk of several minutes or so between the terminals and the garage through elevated passageways.


According to the article, ride hail trips make up 40% of trips during peak hours, and putting arrival and departure trips in the same place would make it easier for drivers to pick up new riders.

Note that a couple years ago, there was talk about putting in a moving sidewalk/better connections between the closest transit station and Logan Airport ("Automatic for the people: Logan to study if a train (or monorail) should replace shuttles at the airport," Boston Globe).

====
Past articles on better TDM practice for airports include:

-- "A brief comment on ground transportation at National Airport vis a vis VRE rail service," 2016
-- "Why not a bicycle hub at National Airport?: focused on capturing worker trips but open to all," 2017
-- "Revisiting stories: ground transportation at airports (DCA/Logan)," 2017
-- "Airports and public transit access: O'Hare Airport and the proposed fast connection from Downtown Chicago," 2018

For profit shuttle service launching from Duluth and Mankato to the Minneapolis St. Paul airport. (Like Logan Express but private.)

More airports should at least engage this element in their transportation planning.

While the intro rates will be $9 each way, they do anticipate the market price will be "as high as $30 or $32 based on demand."

Transportation management shouldn't just be for airports. At Newark Penn Station, Raymond Plaza, a one-way street in front of the station, is a complete disaster with all of the ride-hails dropping off, picking up, and especially waiting for their riders. I rent a car from the rental place across the street when visiting my mother in NJ not really accessible from commuter rail (unless I wanted to add 1.5 hours to my trip) for only a 15-mile ride. But I need to budget at minimum 20 minutes for the final *one block* to drop off the car. There is a complete lack of management of those services, so it has become a complete disaster. I wouldn't be surprised if that isn't the case for other train stations. Short of bulldozing the Hilton across the street from the station, there isn't really a solution other than taking over some nearby parking lot. And probably should involve moving the car rental place, too.

Hmm. I missed this comment before. Yes, TDM should be SOP for "stations" -- airport, train, bus, local transit.

My writings on the Silver Spring Transit Center commented on "free zones" for car share and better accommodations for commuter and inter city buses, but not rental cars.

I didn't write about the old Hertz rental center in Silver Spring, which also used a nearby county parking structure, but not with a dedicated parking area, and it was a madhouse.

... in the past I've commented on how this should be set up in future iterations of Union Station too, how the wayfinding signage in the area inadequately addresses rental vehicles, etc.

So yes, this is a big issue.

Always pay attention to the Fuel Policy. Not always pick up full and return empty option is advantageous. Don’t rush to purchase the full tank of fuel from a car hire supplier on a small island or if you rent a car for a few days. It may turn out that you won’t be able to use all that purchased fuel. If you are renting a car for more than 5 passengers, it is often cheaper Car rental under 25 and more convenient to rent two cars of the standard car renting class, instead of one multi-seater vehicle. The cheapest car rental in Boston is Chevrolet Silverado from Enterprise. Its price is only $27.22 per day.

Enterprise is the car rental company with highest customers' rank in Los Angeles Airport with a rating average score of 8.9/10, based on 2000+ customer reviews. The cheapest vehicle from Enterprise is Nissan Versa of Compact car rental class for $43.84 per day.
Car rental under 25
You should always specify the correct Residence Country because it may result on the price of the rental or even refusal of rent a car. Usually for drivers with US citizenship, the listed prices don’t include CDW and TP. If you are not from USA and buy such rental, you may be very unpleasantly surprised by the manager's requirement to buy insurance as rental insurance is obligatory.

What’s the Minimum Age to Rent a Car?
Because drivers under 25 statistically get into more auto accidents than other age groups, car rental agencies have long penalized young drivers—even those with good driving records—by charging high daily underage fees, restricting the types of cars that can be rented, and even banning drivers (particularly those ages 18 to 21) from renting at all. So what’s an underage road tripper to do? See more here: la car rental under 21 .

Car rental Los Angeles under 25
Under 25 years old Car Rental Los Angeles Airport LAX
Under 25 rental cars in Long Beach Airport [LGB] and other relevant cars
If you are traveling on a tight budget, have a look at the costs of rental cars and Young Driver Fees in airports and downtown locations near Los Angeles LAX Airport. Compare them with the amount of money you will spend on car rental for under 25 in LAX Airport, California. Don’t forget to add the costs of the transport from Los Angeles, CA, USA to your selected pick-up location.

The best rated under 25 car rental suppliers are presented