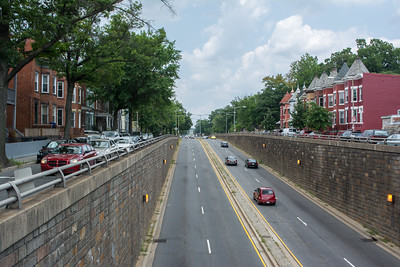 I argue that the city's major commuter streets should be undergrounded because of the deleterious impact of all the street traffic on quality of life.

-- "Who knew? There's been a freeway deck in Oak Park, Michigan over I-696 for almost 30 years," 2018
-- "London Mayor proposes roadway tunnels to divert surface motor vehicle traffic and congestion," 2016
-- "Tunnelized road projects for DC and the Carmel Tunnel, Haifa, Israel example--tolls," 2011
-- "Maglev as an opportunity for DC to underground through traffic on New York Avenue," 2020

DC is doing this at Dupont Circle on Connecticut Avenue but it's a one-off project not coordinated with other community urban design improvements.

BCA has done a lot of interesting work around neighborhood-specific proposals for urban design and cultural interpretation, taking up the slack from DDOT's Mid City East Livability Plan, which said the neighborhood should take the initiative, not them.

They have a meeting tomorrow, where ZGF Architects, which on a pro bono basis agreed to outline preliminary engineering and architectural concepts and designs, will be sharing these with residents of neighborhoods abutting North Capitol Street and the Bloomingdale neighborhood. The forum will include lots of opportunities for comment and feedback.


Developed by Chris Somma of ZGF Architects LLP, the design details a deck-over that will cover a throughway submerged portion of North Capitol Street and create a surface-level park that will reconnect the east and west sides of North Capitol Street. The park will extend from approximately V Street to Seaton Place and will feature history timelines of abutting neighborhoods, an amphitheater, a children's water feature, a streetcar caf6, a Capitol dome overlook and other proposed amenities. ...

Last year, Ward 5 Councilman Kenyon McDuffie proposed S4O million be placed in the DC budget for the deck-over, and has indicated a willingness to include a similar proposal in his Ward 5 DC budget proposal tor FY21.

A similar initiative is developing in the South Park area of Seattle.