-- "Point Breeze and Tioga-Nicetown: Why one Philadelphia neighborhood has surged while the other languishes" 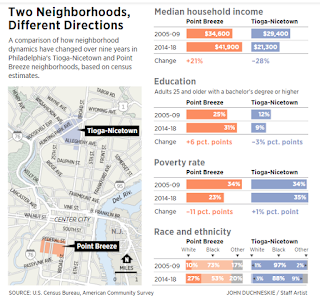 The basic lesson is one community, Point Breeze, is in the core of the city, the other, Tioga-Nicetown, is farther out--seven miles northward, out from Center City Philadelphia.

2. There are more assets and successful areas proximate to Point Breeze, while Tioga-Nicetown is more of an outpost.

3. But there are proximate centers near to Tioga-Nicetown (East Falls and Germantown) and with additional planning and revitalization efforts, a stronger and more successful improvement program could be created.


In the 2000s, gentrification was already underway in the Graduate Hospital area, said John D. Landis, a professor of city and regional planning at Penn. Point Breeze was adjacent — a natural next step.

“Gentrification is sort of a checkerboard approach,” Landis said. “It doesn’t jump over areas into a new area.”

The neighborhood is also walkable, and it’s easy to hop on the Broad Street Line.

Other factors figuring into Point Breeze’s resurgence were vacant properties (a quarter of its homes were empty a decade ago), politicians friendly to redevelopment, and city policies that allowed taller buildings and offered 10-year tax abatements.


I don't exactly like the term "gentrification." To me it is more about investment versus disinvestment. Displacement isn't a natural outcome, but it is accelerated when programs aren't put in place to help people stay in a changing community.

And what in this article is called "checkerboard" I don't think is exactly accurate. It's about adjacency and what the Live Baltimore resident recruitment program calls "the one-over neighborhood" ("Shaw (and Mid City East) as a one-over neighborhood: revitalization, displacement, gentrification as a function of critical mass and timing," 2013) that is when a neighborhood like Charles Village or Federal Hill is desirable, but unaffordable to many, they move to the closest neighborhood near to where the want to be, but a neighborhood with similar characteristics in terms of housing stock, historicity, mobility access etc. ("The eight components of housing value," 2016).

The point the article makes about transit access and where a place's position is within the transit network, so whether or not the connections provided are useful, is important.

Is there a way to reconfigure transit service so the transit stations in Tioga-Nicetown are more useful for area residents?

The article mentions too that industrial areas between Tioga-Nicetown and Germantown and East Falls are barriers too.  Germantown also has serious issues.

As populated as Philadelphia is--with 1.58 million residents it's the sixth largest city in the US--plenty of neighborhoods, like Germantown, are underpopulated which contributes to vacant property and abandonment, and weaknesses in public services, community amentities, and retail.

(Germantown once had a thriving business district that declined as the city's income level dropped and various regionally-oriented and national chains went out of business.  Revitalization was thrwarted too  by a mendacious community development corporation.)

i need to email you, would love to hear more of your thoughts about Baltimore and Philly etc

better to do gmail:

Sadly, haven't been to Philadelphia for a bit.

Was talking with Suzanne about Baltimore.

Again, for me, the biggest thing Baltimore could do would be to have a transit _network_. Without it, it can't build up to the critical mass it needs of in-migration.