In the 1990s, residents in the Yalecrest neighborhood of Salt Lake City petitioned for the right to install decorative streetlights to provide better lighting at the pedestrian scale, complementing the more traditional streetlight program with taller poles focused on providing light to streets for motor vehicles. 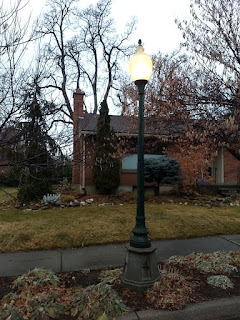 Called the Privately Owned Street Lighting Program, the city often provides grant support, but the residents remained responsible for organizing and paying for the construction, as well as covering the ongoing costs of the electricity--billed to specific lots where the poles were erected--and changing burned out bulbs.


Separately, Salt Lake has a different program allowing for "enhanced service" comparable to the private lighting program, but had been organized as special service districts.  That changed recently, and the many smaller SSDs were rolled up into two consolidated "public lighting districts" to pay for, manage, and upgrade lighting systems to LED lights, etc.  Residents in those districts pay an additional monthly fee, tacked on to the city utility bills, which cover water and waste collection.

And the neighboring City of South Salt Lake has a Street Lighting Master Plan that covers night time lighting on multiple dimensions, in the manner of the most forward-thinking cities. 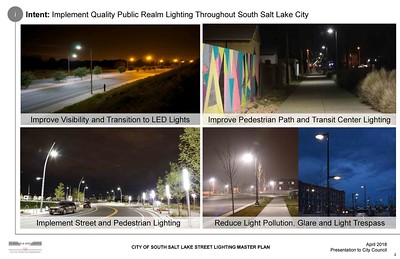 These past blog entries discuss best practice planning for lighting in multiple dimensions, not just for safety, but for activation, branding, etc.


In Washington, DC this kind of neighborhood lighting is installed in historic districts and is called Washington Globe lighting, although you can find this kind of lighting--which I think of as pedestrian and sidewalk oriented as opposed to the tall streetlights which focus on lighting streets for cars--in other neighborhoods.  The program is initiated, managed, funded and operated by the city, under the public space maintenance responsibilities of the DC Department of Transportation (DDOT).

It's very difficult to get the city to install this kind of lighting in places where it isn't already installed, and it is expensive to do so because the way it is installed is by integrating the lights into the separate street light electricity network installed within the public space.  That means digging up the street and planting strips, creating a trench, installing electrical lines, etc.

Separately, DC aims to do a master upgrade of all the city's streetlights, for energy and cost savings, although this has been controversial in many neighborhoods, concerning whether or not LED lights pumping out too much Kelvin can damage your health ("The Changing Glow Of D.C. As Streetlights Make The Switch To LEDs," WAMU/NPR), so the program has stalled.

The brilliance of the Salt Lake Privately Owned Street Lighting Program is that it is so much cheaper, maybe 10% of the cost of the normal way, because rather than a massive digging up of the public space to connect the lights to the public streetlight network, only a bit of the public space has to be disturbed, because each light is instead connected to the electricity system of individual houses--the lot on which the lightpole is installed takes on the responsibility.

While residents have to spend the time to make this happen, it doesn't require the lengthy approval and budgeting processes required when adding the lights to the publicly owned and managed streetlight network.

The Salt Lake program is interesting because it's an example of civic engagement, "self help," community and neighborhood organization, and civic pride.

This is demonstrated by how many property owners and adjacent residents "take ownership" and express civic pride in these lights, by decorating them for holidays--not just Christmas but Halloween--or just because.

This streetlight has a lighted wreath and green lighted bulbs on the globe. 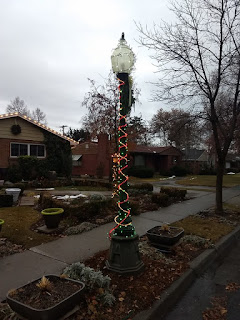 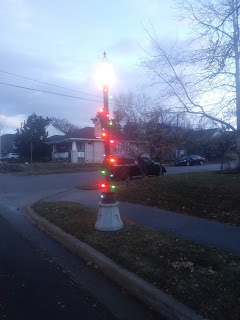 You can't really tell from the photos, but on this block, houses on one side have changed the light bulb to red and on the other side of the street, green.  So the globes glow very strongly either red or green. 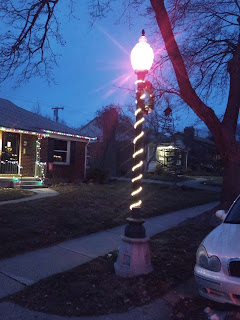 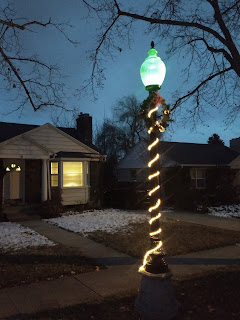 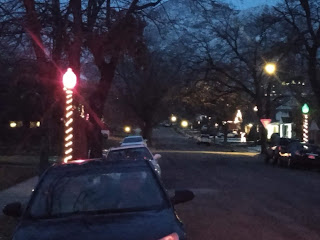 This street has a coordinated treatment also. 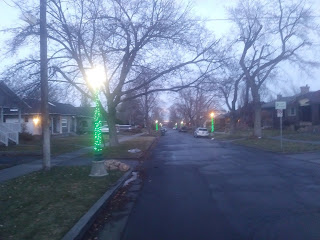 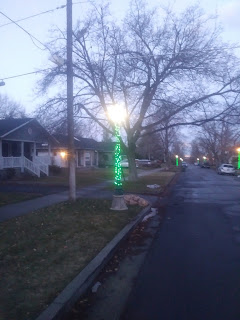 Similarly, many residents go all out for holiday decorations, for Halloween, Christmas, even Thanksgiving.

On one nearby street, many of the residents coordinate Christmas decorating, calling their street, "Christmas Street"  Images from "Christmas Street in Sugarhouse," Utah's Adventure Family.  (My camera isn't good for night pictures.) 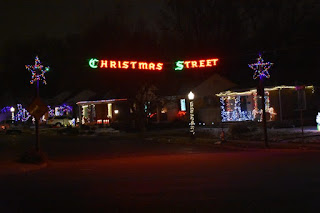 Go ahead keep lighting the sky and not the ground.

Biggest issue in DC is lack of pedestrian streetlights (the globes are ok but you can complain about extra light) and the lack of lights at street level intersections.

In Brookland, they have the tear drops attached to wooden electric poles, which they went to after a streetscape project. I can't remember what was there before.

But they also added double tear drop lights on the poles at a height appropriate to lighting the sidewalks, focused on pedestrians.

====
I don't think neoliberalism is dead yet. It's still the prevailing ideology in terms of a denigration of the government's ability to do stuff in favor of the private sector and the constant push to lower taxes.

(Utah just did the latter, not to the extent of Kansas, but in a way that is regressive. Just to lower taxes for the wealthy.)

Theoretically the Tea Party was a response to a neoliberal (capitalist) bailout of industry, and absolutely the bailout favored the banks and provided almost zero help for individuals, but the result of the Tea Party was to strengthen Republicans who had no interest in making things better for citizens as consumers.

I haven't read Labour's manifesto. It was for a new way, but according to all reports it wasn't clear and was too larded.

Just like AOC's Green New Deal gets mucked up with everyone having to have a job through it, ending inequality and racism, etc.

And like you keep pointing out, there isn't much money around to fund governments doing that kind of stuff.

Did you read this? I haven't written about it but I find it very interesting:

I saw a different piece like this, about "US." Granted we probably have more racism, so us in the UK is about English first. In the US, it's not just about Americans first, who is termed to be American tends to be drawn in racial tones.

Well the neoliberal article I sent along is mostly interesting from the author who is Warren's chief domestic policy advisor.

Saw that Guardian article, not sure if I agree, british politics is tough.

But I'm always doing a comparative approach, so this is your first SLC post (I think) which is a good contrast to what we have back in DC.

What's frustrating to me is that the reality is that there is a lot of one off best practice all over, but it isn't captured and systematically adopted.

E.g., I am working on the plan for Eastern Market. I have file drawers full of stuff I saved over the years. Sadly a bunch was poorly "organized" so I haven't gone through that stuff, but I have over 30 pages of "ideas" I codified in the days before I left and I continue to collect stuff (although I haven't added it to the list yet).

Just doing some of the things others do would make a much better place, not just for EM but for communities all across the country.

But then the gestalt of my reading stuff and experiencing stuff then adds to the "miasma" and leads to even better ideas.

(The concept I have for an EM campus would be the most significant locally constructed project since home rule, with the possible exception of the DC Water cooker/electricity generator. It's certainly top 5. But I fear that it won't ever make it out of the draft. But the concept started from different kernels and became its own thing.)

===
Writing about Kroger last year I came up with the term "stranded best practice."

They are a big firm with many divisions and they do some really good things, although probably none at the level of absolute best practice (e.g., their loyalty program is one of the best, but not conceptualized the way that independents like Dorothy Lane, Harmons (SLC) and Stew Leonards do it, they have soft goods add ons but they aren't as well priced as Walmart, they had convenience stores but weren't as well thought out and integrated as Giant-Eagle of Pittsburgh's version, etc.).

If they would take their better practices and make all the divisions implement them they'd be better off.

If they took what they did and improved it to the level of best in category, they'd be way better off.

That's like with cities. E.g., DC's sustainability initiatives such as with waste. If you're not adopting best practice at the level of the best now, how can you possibly expect to get to the point of "best in the nation" by 2030?

====
SLC by the way is way better with waste diversion and recycling. I have a partially written post about better practice in waste, including SLC as an example.

The libraries, which I've written about before.

But I see now too that the touted transit system falls in comparison.

Will be writing about South Salt Lake and it's aim at repositioning using TOD as a fulcrum. (Interesting example vis a vis the PL.)