As a leading firm manufacturing lights and lighting systems, Philips has encouraged cities to develop lighting master plans and has a variety of initiatives supporting architectural lighting programs and public art-related lighting projects. The company was spun off from the main firm in 2016 and has changed its name to Signify, although it will still use the Philips brand (press release). 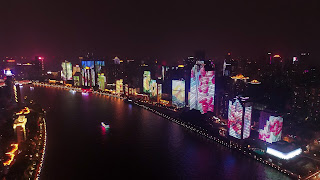 One of the firm's recent projects involved an LED lighting scheme implemented across 24 buildings alongside the Pearl River in Guangzhou, China.


Signify (Euronext: LIGHT), the world’s leader in lighting, announced today that it completed the illumination of 24 buildings in Guangzhou’s central business district along the Pearl River area in China. The large-scale connected LED lighting project, which includes façade lighting and animations projected onto buildings, further underlines the company’s leadership as the lighting company for the Internet of Things.

Sightseeing in technicolor: Home to a population of over 14 million, Guangzhou is one of the most populated and fastest growing cities in the world. The 2,000 km Pearl River runs through the city and is known for its vibrant waterfront and high-rise buildings.

During the night the lights from the buildings are reflected in the river, creating spectacular watercolors to enchant citizens and tourists. As well as highlighting architectural features, the connected LED lighting is used to create dynamic light effects and images to be projected on the buildings such as blossoming flowers.

Eindhoven, Netherlands, where the firm is based, was one of the first cities to create a comprehensive master plan, although the document no longer is accessible online. The plan identified six categories of light:
More recently I came across another exemplary example of a lighting master plan, for Bath, England:

and I discussed it in the context of planning for "Night time as a daypart and a design product" (December 2017). 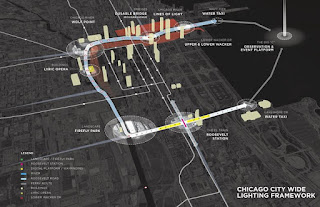 Chicago announced an initiative to create a Citywide Lighting Framework Planning Process, with elements comparable to those in Eindhoven's plan, with an emphasis on artistic lighting, but it isn't clear if a formal plan document has been made public.

Cities should also be thinking about upping their approach to lighting in a more comprehensive manner and take the opportunity to do so in the context of streetlight conversion planning.