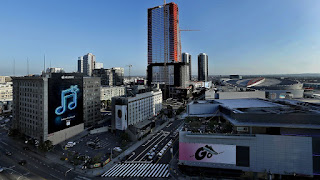 
The Los Angeles Times has an article, "Its design has been scorned, but L.A. Live has been crucial to downtown's resurgence," about LA Live, an entertainment district built around Staples Center, the home of the Lakers basketball team.  From the article:


The trio of NBA All-Star games highlights how big events such as awards shows, concerts and movie premieres seem almost routine as L.A. Live marks its 10th anniversary. But the creation of one of the region’s largest economic engines, which was built by Denver billionaire Philip Anschutz’s AEG, was years in the making — and there was nothing certain about its success.

For decades, planners lamented the state of the beaten-down blocks near the Los Angeles Convention Center. The neighborhood south of the downtown Financial District had once been filled with stately Victorian homes. But by the latter half of the 20th century, it was an unwelcoming expanse of parking lots interspersed with small, run-down apartment buildings and shabby storefronts.

Officials declared it part of a downtown redevelopment zone in 1975, yet little change was visible until the construction of Staples Center and L.A. Live beginning in the late 1990s.

Since then billions of dollars’ worth of residential towers, hotels, shops and restaurants have been completed or are under construction. Many more projects are in planning stages, and the neighborhood called South Park is now one of the city’s most vibrant.

Washington Wizards and Washington Capitals and their Downtown DC Arena.  It took me many years to accept the positive impact of the now named Capital One Arena on the success of Downtown Washington. While I still believe that I am right that the area would have revitalized eventually (and actually there are success problems with the development still today, 21 years later, because of problems with the urban design) there is no question that it:

(2) draws and re-introduces suburban residents of the metropolitan area to the city, and contributes more positively to the image of DC within the metropolitan landscape for commerce and residential choice. 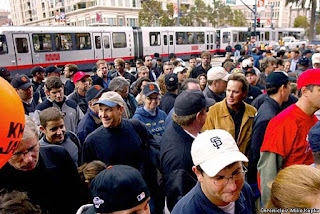 A common process, although it works better in some settings than others. It's fair to surmise that the same process touched off by the creation of what was originally called MCI Arena is comparable to that of the experience with LA Live and the Staples Center, just as San Francisco benefited from the relocation of SF Giants baseball team to a in-city location ("Opening Day Distraction Why the ballpark was a great idea, four years later," John King, San Francisco Chronicle, 2003).

The difference though between LA and DC and San Francisco is that LA Live creates a "wrap around" entertainment district, unlike Capital One Arena or AT&T Park.

Note that new districts have been created around the St. Louis Cardinals baseball team ("Ballpark Village"), District Detroit for hockey and basketball in Detroit, although so far suburban basketball fans haven't warmed up to the location, and in Buffalo, Harbor Center around the Sabres hockey team ("The Pegulas take over another downtown property: what's next," WIVB-TV).

And the New York Islanders didn't find the in-city location in Brooklyn to be particularly successful, so they're moving back to Long Island.

The Green Bay Packers are building such a district too, as are soccer teams in England.

Arenas/Stadiums as buildings versus as an element of overarching entertainment districts.  But there is a difference between the arenas developed "back then" versus now.

Back then arenas and stadiums were developed as more "one-off" developments. Now they are developed as part of an entertainment district. The public policy dilemma is do you give the team exclusive development rights over that additional land, or are the opportunities shared, and available to other landowners?

Note that the Golden State Warriors argue that they need the additional revenues from adjacent property development to be able to afford a high salary team and expensive support systems ("How the Warriors are laying the foundation," Sa Francisco Business Times).

The NFL expects that an entertainment district being built around the forthcoming Rams Stadium will set the team and the NFL apart from other sports teams in the region, and provide economic value every day of the year.


The stadium, centerpiece of a 298-acre sports and entertainment district that will include a hotel, retail, offices and housing, won't be completed until 2020. In the meantime, the first potential suite owners and sponsors are getting a glimpse of the project inside the 20,000-square foot premiere center.

Framework for evaluating arena and stadium proposals to maximize public benefit.  In this 2014 entry, "An arena subsidy project I'd probably favor: Sacramento," recognizing that public subsidy is going to be provided in most instances, regardless, then we should begin developing a framework or lens focused on figuring out what works and what doesn't and how to achieve the greatest and fastest economic return on the public investment side, and aim to include these elements in the agreements between the team and the public counterpart.

Sports spending within metropolitan area jurisdictions.  While I developed the point later than this particular entry, one thing that economic analysis of sports expenditures gets wrong is differentiated impact within a metropolitan area.  They are right that spending on sports merely substitutes for spending on other forms of entertainment.  But where that money is spent can matter, especially if it is used to leverage city branding, economic development, and in-migration of tax paying residents.

Although that doesn't mean I've jumped on the sports subsidy bandwagon, merely pointing out that there is a more subtle angle that is missed by traditional analysis.

The framework.  Unfortunately, unlike some of my other frameworks, I haven't focused on expanding the list of items in the aims of creating a complete framework.

2014 list
Characteristics that support successful ancillary development associated with professional sports facilities:
Past entries that complement this listing include "Stadiums and economic effects," "Sports stadiums (and arenas) and local economic development and a DC soccer stadium," and "Stadiums and arenas as the enabling infrastructure for "money-making" platforms ."

Additions.  Other items I could see adding to the list include:

Other suggestions for elements gratefully acknowledged.