I have been enamored of architectural lighting and neon and electric signs as an element of the built environment for quite some time.  But I hadn't considered the issue as systematically as I should have, for example along the lines of the six elements identified in the Eindhoven Lighting Master Plan discussed below.

The six categories of light: 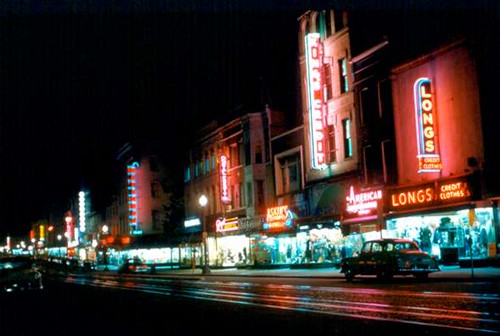 F Street in Downtown Washington, DC in the 1950s.  Image from Reston Paths.

In the days of thriving center city commercial districts and neighborhood theaters, electric and neon signs were distinctive elements of the visual identity of these districts.

And even when the stores were closed at night, attractive signs denoting the businesses and their wares were typically lighted.


Of course, Times Square in New York City, NYC's Broadway Theatre District and the lighted marquees, "The Strip" in Las Vegas, and the entryway to Reno's casino district are prominent examples of places that continue to define themselves through "out of this world" lighted signage. 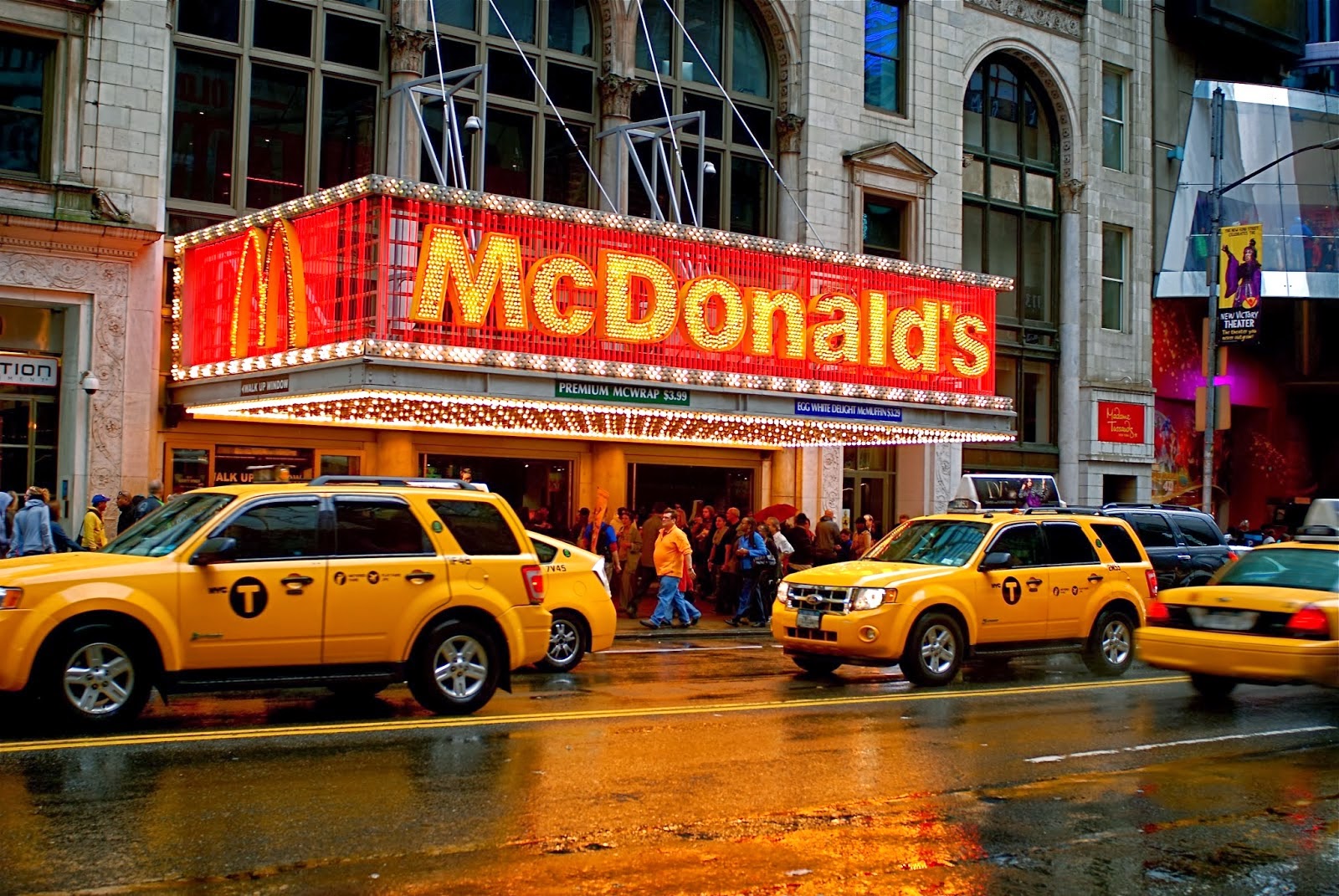 On Broadway, the McDonald's Restaurant has incorporated a lighted marquee into the facade as an element of its store design, to leverage and connect to the area's cultural and architectural heritage.

An architect assigned to figure out what to do realized that the theaters could be combined into an integrated operation by creating a common entry-foyer system.  Since then the Playhouse Square Foundation has been organized as a community development corporation and has been spearheading the revitalization of that area (see the past blog entry, "The Howard and Lincoln Theatres: run them like the Pittsburgh Cultural Trust/Playhouse Square Cleveland model"). 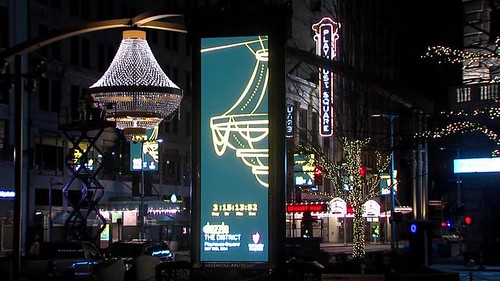 Image from Channel 5, Cleveland shows the various elements of the lighting project, which are not limited to the new chandelier. 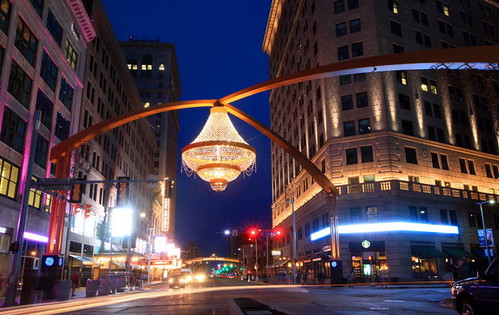 The latest element introduced to the Playhouse Square district by the Foundation is a chandelier, the world's largest outdoor chandelier, placed at "the center of Playhouse Square" at 14th Street and Euclid Avenue.  It was lit in an opening ceremony on May 2nd, an event which attracted over 20,000 people, place at the intersection of , as a way to further define the visual elements of the area, by playing off how the old grand theaters typically had chandeliers as the centerpiece of their foyers.  See "Playhouse Square's chandelier succeeds as an instant icon for Cleveland's theater district" from the Cleveland Plain Dealer.

-- Video from PlayhouseSquare Foundation about the "Dazzle the District" project

While some criticize the chandelier as kitschy and popular, by all reports it is popular with residents and visitors and is becoming a signature landmark and a place to meet and be seen.  From the article:


... the 20-foot-tall outdoor chandelier – officially declared by Guinness last week as the largest in the world - is already helping to create the visible vitality that Playhouse Square has long sought and never quite achieved.

Even though the theater district has attracted a million visitors a year to its revitalized 1920s movie palaces and Vaudeville houses, the liveliness has never seemed to reach out to Euclid Avenue, the city’s once and future Main Street.

The chandelier is part of a broader set of streetscape improvements and identity elements, including gateway arches, kiosk signage, etc.

Chicago lighting design/plan competition.  The City of Chicago takes the Playhouse Square initiative a couple steps further, by proposing ("A bright idea: City aims to light up architecture to boost tourism," Chicago Sun-Times) to enhance and use distinctive architectural lighting as an element of the city's identity.. 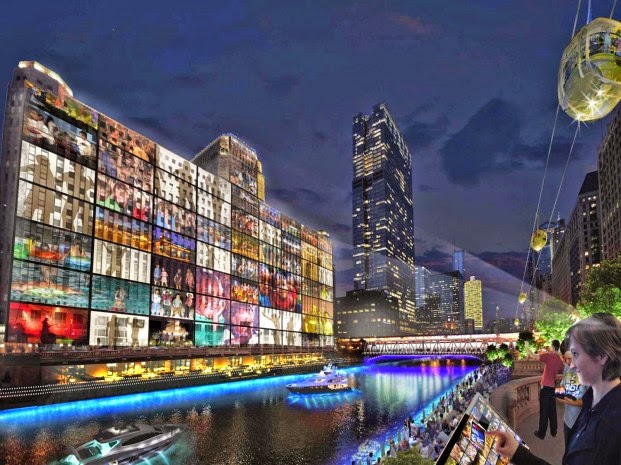 To illustrate and develop the lighting-identity concept (rendering of a concept for the Chicago River, left), Chicago has announced a design competition ("Emanuel launches design contest to make Chicago 'city of lights'," CST)


to spotlight five Chicago signatures: the Chicago River, iconic buildings, 180 bridges, a CTA L system that’s one of the most “physically striking” in the world and Lower Wacker Drive

as a step towards the creation of a lighting framework master plan. 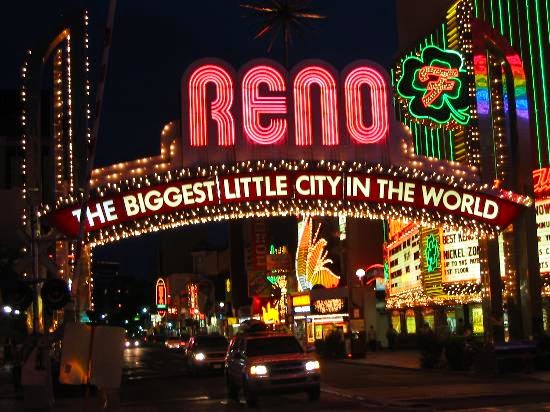 
This holistic approach to illuminating cities has come to be known as a lighting master plan. While few cities outside Europe have a plan currently in place, the steps involved in creating one help officials evaluate how the layers of lighting – street-level, marquees and directional signage, and monuments or cultural landmarks – should work together and be energy efficient.

Eindhoven, Netherlands is probably the furthest along of any city in terms of lighting planning, partly because the city is the headquarters of Philips Corporation, which has had lighting as one of its core business lines since the company's founding more than 100 years ago. From "Master Plan | Eindhoven, the Netherlands: An integrated approach to urban lighting melds Eindhoven's past, present, and future":


While light has been a part of Eindhoven's history since the founding of Philips in the late 19th century, only recently has urban lighting gained such a prominent role in the visual identity and experience of the city. In 2004, the city council asked van Stiphout to rewrite the existing lighting master plan, then 9 years old. The highly technical (and outdated) document, according to van Stiphout, “only focused on the public lighting of the city.”

In discussions with then-mayor Alexander Sakkers (who served 2003–07), it was decided a new approach for Eindhoven was needed to address (and market) the unique identity of the city. In particular, Sakkers wanted to call attention to the importance of having a company like Philips in Eindhoven and to the role of the city as a “Brainport”—leading to a brand campaign to promote the region's leadership in technology and research. Van Stiphout, realizing that it no longer was appropriate to just “rewrite” the existing master plan, composed “a future vision for Eindhoven, with respect to light, and how we can be different from other cities in the Netherlands, Europe, and even the world.”

The project began with analysis of all aspects of lighting in the city to define a set of goals for the next decade. With this research, van Stiphout identified six categories of light: urban lighting (streets, public areas), buildings and objects, art (indoor and outdoor), events and festivals, information, and advertising.

While Calgary doesn't have a full-blown lighting master plan, they have created the Centre City Illumination Guidelines as an element of the city's urban design and revitalization program for their downtown.  They are using an architectural lighting project for the Centre Street Bridge (below) as a way to illustrate these principles.

Festivals.  Lyon, France has had a lighting festival, Festival des Lumières, since the 1850s. According to the Christian Science Monitor article "Cities shed artful light on the canvas of night,"


building facades become moveable feasts of color and familiar landmarks take on an animated aspect. Street performances and music round out the celebration, and people are seen strolling and admiring the magically transformed cityscape.

Night time lighting and safety.  Earlier in the year I wrote a couple of pieces on this ("Night-time safety: rethinking lighting in the context of a walking community"), advocating for structured programs for addressing night time lighting issues in "the walking city."

Association.  There is an association, LUCI | Lighting Urban Community International, linking those cities addressing lighting as an identity element. 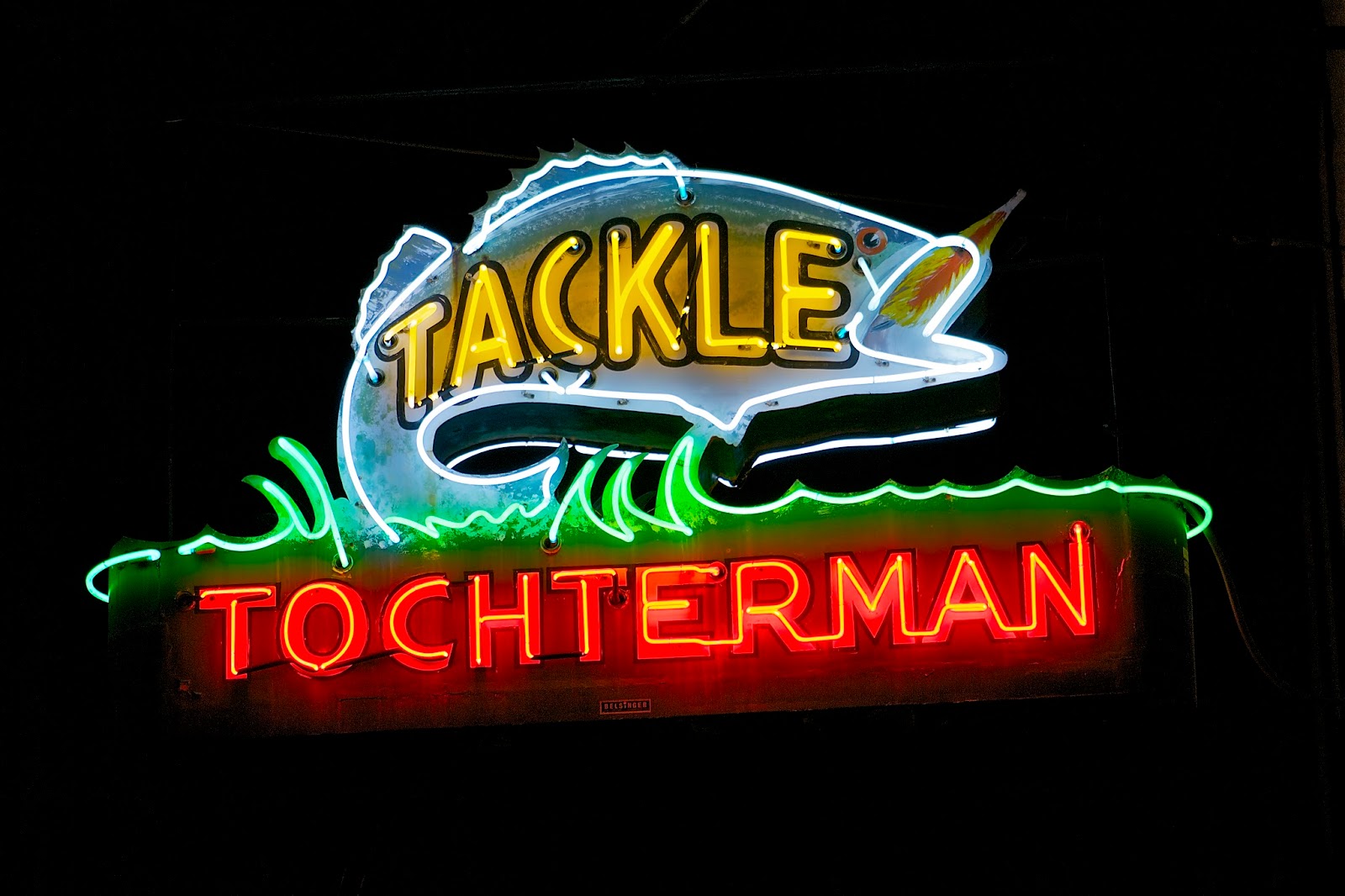 Signage.  Many cities have programs to assist businesses with the development of high quality storefront signage, which can be a distinctive element of business, commercial district, and community identity.

-- Thrive: Guide to Storefront Design in the District of Columbia, DC Office of Planning
Typically, the focus isn't on electric or neon signs, which cost a lot more to construct and there are few craftspeople with the skills to do so.

Still, last year I saw a presentation by people associated with the American Sign Museum in Cincinnati, and they were working with the city on a sign project involving artists, in a particular commercial district. 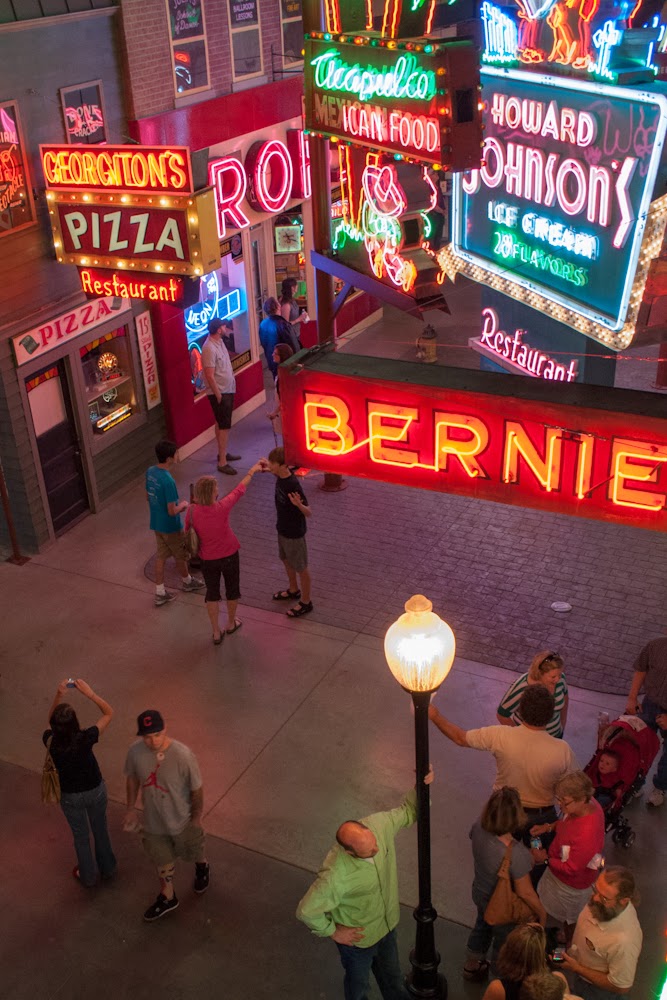 Image:  Inside the American Sign Museum.  City museums in Richmond and Pittsburgh also display electric and neon signs from defunct but memorable businesses that once operated in their respective cities.

-- Museum of Neon Art, Los Angeles
-- Exhibition at the AIA/Philadelphia

Night lighting as light pollution.  Separately there are initiatives to reduce lighting at night, because of the impact on the environment ("Light pollution," National Geographic Magazine). Those issues have also been raised in the context of the Chicago initiative ("Environmental group takes dim view of Emanuel’s night light plan," CST). 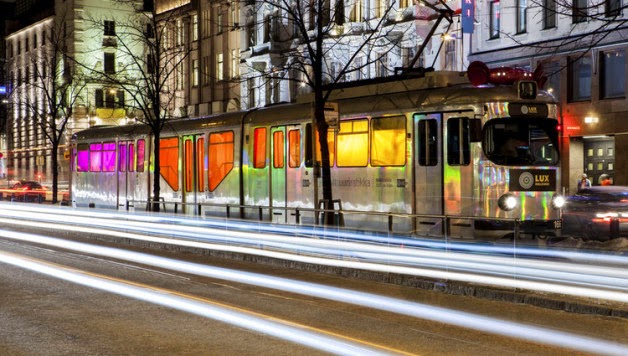 A Helsinki tram is specially lighted as part of the Lux Helsinki Festival.  Wikipedia photo.

Great information. This works great for me. Thanks for sharing this :)