The latter two pieces will be published this week.


In the run up to the end of the year, media outlets run articles about the most important matters they covered over the last year.  In the case of the end of a decade, they'll run stories about the last ten years.  This got me to thinking about writing in this blog (mostly) over the last decade.

It's not quite a total of 5,000 posts, but they range from photos only to very long pieces.  Sometimes they are reprints of previously written articles.  Very rarely, they are articles by other people.

In the last few years, I write a lot less, but the pieces tend to be much longer, because I am aiming for a definitive review and coverage of an issue--my expectations for the quality of what I produce are higher and since I've been saying the same basic stuff since 2005, I don't like to repeat myself.

Because I haven't put effort into learning more complex html coding, it means that the articles are "run on" and very long.  I know it would be better to switch to a format where the beginning of an article is posted, and then people have to click in order to "read more."

I never wanted to do that though because I thought most people wouldn't click through.  Then again, most people probably say TL;DR for the same effect.

But I don't have the means to transfer all the files to another type of site, and I am "too afraid" to try to change the template for fear of losing stuff.

The blog has been rated a top 100 blog in urban planning, which is quite an honor, given the august company of the other chosen writers, some truly great writers who are consultants, writers, elected officials, teachers, etc..

And this writing ended up getting me a gig writing for the European Union National Institutes of Culture Washington Chapter, when they were doing an arts-based revitalization project in Baltimore in 2013/2014 (Europe in Baltimore blog).

I wrote about revitalization in eight European cities and that definitely expanded my horizons and thinking about culture and revitalization both as well as systems in terms of how the EU creates practice networks to codify and communicate best practice across Europe.

In any case, I'd say three elements distinguish my writing over the past 10 years:

1.  A systems approach, a focus on the idea of cities/places as networks of assets, ranging from libraries as a network or parks as a network, the local ecosystem for culture, or transportation systems as an integrated network, etc.

Much of the time I write about this in terms of processes, or systems of interconnected procedures that produce an outcome.

Years ago, I had an "argument" with the founder of the Greater Greater Washington blog, where he believed that my use of the word "process" means surveying a wide number of people concerning an issue.  That's not what a process is.)\

I've been influenced especially by the book Process Innovation by Thomas Davenport, as well as having read the textbook The Social Psychology of Organizations (fourth edition) in college.  Also, Social Marketing for Not for Profit Organizations, which discusses social marketing for organizations in terms of three publics: the input public that gives you resources; the throughput public that does that work; and the output public to whom your efforts are addressed.  Charles Perrow on redundancy.  And others.

I don't think these theories are competing so much as different sides of the same coin. "Growth Machine" theory is best for explaining the motivation and focus of "the land-based elite," and "urban regime" theory explains in detail how the land-based elite operates and functions.

In the paper, "Now What? The continuing evolution of Urban Regime analysis," dean of the urban regime theorists Clarence Stone writes:


An urban regime can be preliminarily defined as the informal arrangements through which a locality is governed (Stone 1989). Because governance is about sustained efforts, it is important to think in agenda terms rather than about stand-alone issues. By agenda I mean the set of challenges which policy makers accord priority. A concern with agendas takes us away from focusing on short-term controversies and instead directs attention to continuing efforts and the level of weight they carry in the political life of a community. Rather than treating issues as if they are disconnected, a governance perspective calls for considering how any given issue fits into a flow of decisions and actions. This approach enlarges the scope of what is being analyzed, looking at the forest not a particular tree here or there. [emphasis added, in this paragraph and below] ...

By looking closely at the policy role of business leaders and how their position in the civic structure of a community enabled that role, he identified connections between Atlanta's governing coalition and the resources it brought to bear, and on to the scheme of cooperation that made this informal system work. In his own way, Hunter had identified the key elements in an urban regime – governing coalition, agenda, resources, and mode of cooperation. These elements could be brought into the next debate about analyzing local politics, a debate about structural determinism.

Since government is about "sustained action" you need to employ a systems/network approach.

2.  A focus on practice by aiming to analyze events/matters/issues in a way to lay out a framework of understanding, so that better practice can be developed and implemented.

One thing I say a lot is that there is a fine line between whining and analysis.  I remember getting pissed off in college when people would say you can't criticize a problem unless you have a solution.  But being able to understand what a problem is is an important skill, just as is coming up with solutions.  Most people aren't good at either, let alone both.

I take everyday pain in the a** events, and try to figure out what went wrong and how to improve on it, in significant ways that aren't necessarily revolutionary but are integrated and creative.

The two most influences on my thinking on this dimension are two books I came across at the college bookstore, but I read them on my own: Diffusion of Innovations by Everett Rogers and Change: Principles of Problem Formation and Problem Resolution.

3.  Constant incremental improvement in my thinking and writing about these matters in terms of systems, better outcomes, better practice, on bigger and bigger scales.

A good example is the concept I developed when working in Baltimore County in FY2010, that I call "Signature Streets" (see the section within this blog post) which is an example of what I call an "Action Planning" approach to planning:

Although my original action planning formulation was first laid out in 2008, based on observations of practice in Arlington County, VA, the Idea Store libraries in the Tower Hamlets borough of London, and the Live Baltimore resident recruitment program.

We are all asset managers now

Two weeks after I turned in the Baltimore County Western County pedestrian and bicycle plan I came across this graphic in a paper by David Barth, and it perfectly encapsulated what I was thinking about with "Signature Streets." 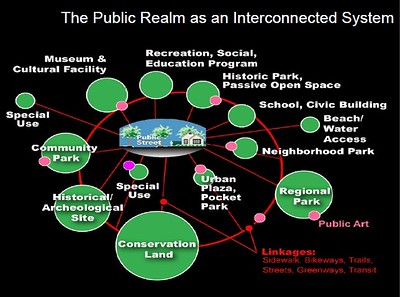 Public Realm as an Interconnected system, Slide from presentation, Leadership and the Role of Parks and Recreation in the New Economy, David Barth

Equity Planning
Signature Streets (2010 in its systems approach to public realm turns out to be a good basis for equity planning (2017) too.

But intervening events influenced this included Grand Jury Duty (2013), a conference as part of the "Europe in Baltimore" project in 2014 when I had the realization that the "public realm as an interconnected system" concept could be extended to include programmatic infrastructure like civil society, education, media and communications, etc., and being introduced to the concept of social urbanism as implemented in Medellin and Bogota, Colombia in 2014 or 2015--I think originally by a Hispanic staffer working on the Purple Line light rail public outreach program, in a side conversation.

Congrats on all your work over the past decade! It's been a pleasure and inspiration to read.