This blog entry is a precursor/expanded section from the forthcoming blog entry, "Purple Line #5: Fenton Street, East-West Highway, and Wayne Avenue, Silver Spring, as building blocks for a Silver Spring "Sustainable Mobility District," which is part of a series of blog entries on how to better leverage the Purple Line light rail project for multiplicative economic, social, community, and quality of life return on investment, and as part of a coordinated improvement program across the transit network.

(There is some repetition in the two posts, but the other has an extended section on Silver Spring and Montgomery County, while this post is more general.)

From BHAGs to BHPAPs: Big Hairy Projects Action Plan.  The concept of BHAGs, or "Big Hairy Audacious Goals," comes from the writings of Jim Collins, author of a number of books analyzing businesses that are "built to last."  According to Collins:


All companies have goals. But there is a difference between merely having a goal and becoming committed to a huge, daunting challenge–-like a big mountain to climb. 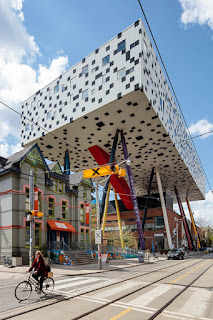 Ontario College of Art and Design.

Toronto as a world city.  Last fall, reading about Toronto planner Joe Berridge, in two articles by Toronto Star columnist Royson James ("Toronto needs to take one last step to reach civic greatness," "Toronto needs a new wave of world-scale projects"), I was struck by how many of the big projects outlined by Mr. Berridge came to be.  From the first article:


... what Toronto needs is a greater push toward the next transformational wave of civic improvements. Double down. Find the money that’s obviously there. Invest and grow or slip back to the tier of cities occupied by Houston, San Francisco, Manchester.


Berridge’s 1999 seminal report, “Reinvesting in Toronto: What the Competition is Doing” gave wings to the movement that prodded governments and civic philanthropists to invest in fixing up Toronto’s derelict waterfront, remake and rebrand its cultural attractions, and think big...

Berridge says it is the city’s “moral obligation” to use its taxing power, its wealth, its status as Canada’s only global city and the historical advantages of public education, public health and public services to propel Toronto into super city status.


Coming out of the SARS crisis, Toronto was in woeful shape. Civic advocacy — much of it centred on a platform erected in the pages of the Star and its campaign for a New Deal for Cities — resulted in a cultural renaissance.

Six new major cultural buildings popped on the architectural horizon and created a buzz that reverberated beyond our shores. Luminato arrived, as did the MaRS project. Waterfront revitalization started. The ROM, Art Gallery of Ontario, opera house and OCAD University are a testament to that time.

According to Royson James, Toronto's trajectory was significantly reset as a result of the city and stakeholders coming together to build a set of new and expanded institutions that were transformative.

His pieces are aimed at getting Toronto's elected officials to think more broadly but also get much more focused and realistic (about funding) to achieve new transit investments, big park proposals, and other projects.

Probably part of the frustration is that the transit program being proposed not only doesn't have funding, but for political reasons, is moving forward on the basis of a number of poor choices.

Big plans in Liverpool, Bilbao, and Marseille.  And in thinking about it further, especially related to what I wrote about Liverpool and Bilbao and the set of new cultural institutions and facilities created by Marseille for its Capital of Culture program in a series of pieces on European culture-based revitalization initiatives, I realized that there is a big element missing from Comprehensive/Master Land Use Plans.

Note that this differentiates from a single project, even if huge, like the Cornell-Technion science and technology initiative in New York City or the Brooks City Base military base redevelopment project in San Antonio, to a focus on multiple projects organized as elements of a larger and transformative plan--here called the Project Action Plan. 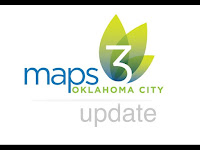 
The MAPS program was first created to help save what was then a moribund city. Throughout the 1980s, Oklahoma City suffered an oil market crash, and into the early 1990s was having trouble attracting outside companies to fill the void. So the city, led then by mayor Ron Norick, tried MAPS. The program passed by public vote and dedicated revenue from a 1% sales tax increase towards numerous projects, focusing on quality-of-life amenities in the dilapidated downtown. During 5 years that the tax was in effect, it raised $363 million in revenue and interest, which went towards 9 projects, including a grand central library, the Oklahoma City Thunder's arena, a revived waterfront, and the famous canal project lined with historic warehouses.

Now MAPS is about to go into its fourth round, with 70 projects accomplished in the first three tranches, and it has sparked a wide variety of complementary investments from the private sector (e.g. the Chesapeake Energy campus, the creation of the Oklahoma City Thunders basketball team) and other public sector agencies.

See for example this article and video ("River Attraction: Oklahoma River is becoming a big draw for Oklahoma City, Daily Oklahoman) about how OKC has developed its place as a premier city for watersports, and the city broke ground on a 5 mile streetcar line in February, which is funded in part from MAPS3.

Hennepin County and the City of Minneapolis, Minnesota.  When I was doing some research on parks planning, I came across the Hennepin County Community Works initiative.  The program launched in the early 1990s and invested in parks, trails, and open space in Minneapolis as an economic development and stabilization strategy ("A County and Its Cities: the Impact of Hennepin Community Works," Journal of Urban Affairs, 30:3, 2008).  It's been wildly successful. 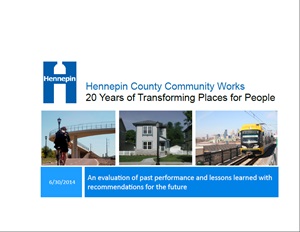 Because Hennepin County relies on property tax revenues for the bulk of its annual income and because Minneapolis comprises a disproportionate share of the county's tax base, the County Government was alarmed over the economic deterioration of the city.

The county found that except for neighborhoods around parks and lakes, the city's property tax base was rapidly declining in value.  As the property assessments declined, so did the amount of money collected in property taxes. 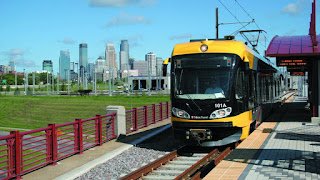 As a matter of risk management, the County realized they needed to step in and invest in urban economic revitalization in order to reverse the downward trajectory of property values within the city.

Initially, they focused on the expansion of parks, open space, and trails development, and later the program incorporated the development of light rail transit service as a way to further build value in the core of the metropolitan area.

In 1990, the City of Minneapolis then created the Neighborhood Revitalization Program with a 20 year tax increment financing bond.  The intent was to provide funds to neighborhood improvement projects, identified through neighborhood-initiated planning processes supported by technical assistance from the city-wide program.  Neighborhoods had money from the TIF to be able to use for projects with the Parks District, School District, and other entities. 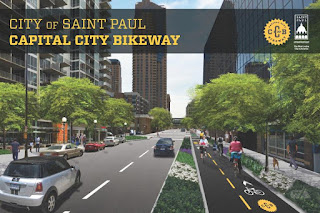 Seemingly the Vibrant Places and Spaces initiative in St. Paul, Minnesota in neighboring Ramsey County, which is now connected to Minneapolis by light rail, seems to be a kind of "child" of the Hennepin programs.

Portland, Oregon.  Of course, to discuss BHPAPs and not mention Portland, Oregon is a big omission.  Although they didn't start with a wide ranging plan, instead it started with an action--tearing down a Waterfront freeway--which they then built upon, through breakthrough planning and initiatives.

The seminal post-freeway plan was a land use plan refocusing on Downtown in 1972 ("A summary of my impressions of Portland, Oregon and planning," 2005), creating perhaps the nation's first "transit mall." 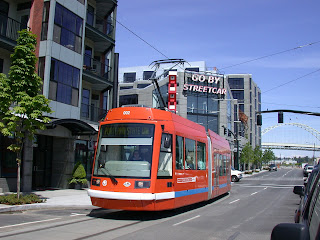 Later plans and projects added light rail to their transit mix extending the Downtown plan, redeveloping the downtown-adjacent railyard into the Pearl District, expansion of Portland State University into a nationally significant urban university, creation of the Portland Development Commission, adding the streetcar, the first modern streetcar project in the US, developing a focus on biking as transportation, light industrial planning initiatives, creating an aerial tram to better connect to Oregon Health Sciences University across the River, expansion of transit programs including more streetcar and light rail lines, and commuter rail, and then a variety of "sustainability" programs including a commitment to sustainable energy and vehicles, creation of a sustainable mobility exclusive bridge, etc.

Social urbanism and Medellín.  Medellin uses the term "social urbanism" to describe the same kind of process ("'Social urbanism' experiment breathes new life into Colombia's Medellin," Toronto Globe & Mail; "Medellín's 'social urbanism' a model for city transformation," Mail & Guardian, South Africa) that Johannesburg is undertaking with the "Corridors of Freedom" initiative, which aims to reconnect people who had been disconnected because of segregation and differentiated access to transportation and civic amenities. 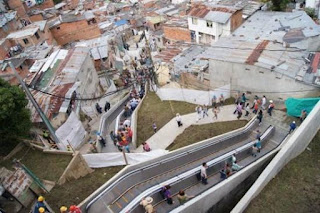 Conclusion.  Cities and Counties need to consider the creation of multi-project comprehensive Projects Action Plan as part of a comprehensive-master land use planning processes.

Both tend to list projects in the various elements (Land Use, Transportation, Parks and Open Space, etc.) but never together in a comprehensive list.

The Projects or Vision Element calls for laying out the top 10 or top 20 projects, and putting it on the community agenda by developing a path and program for realization and implementation.

Note that this recommendation extends concepts outlined in "Town-city management: We are all asset managers now."

A Republican candidate for Mayor of New York City, Paul Massey, is calling for, among other elements of his program, a "Transformational Infrastructure Projects Plan."

but while this may be atypical for a "Republican" his antipathy for reasonable ways to pay for it seems to be out of the Republican playbook. From the article:

"You'll see there are different buckets of funding available right now for these projects," he said.