End of the year articles: decline of local newspapers 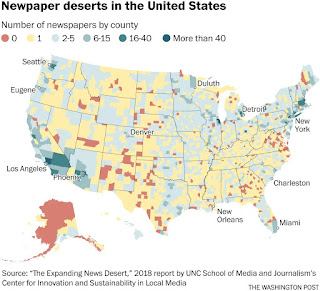 The Washington Post has an article about this, "Ghost papers and news deserts: Will America ever get its local news back?." The article features discussions with the CEOs of Gannett, now the nation's largest chain after a recent merger, McClatchy Newspapers, which goes in and out of bankruptcy, and Tribune Newspapers, which has gone through a lot of turmoil over the past 5 years.


America lost a quarter of its journalists from 2008 to 2018, the vast majority of them covering local issues, according to University of North Carolina professor Penny Muse Abernathy. Newsrooms lost at least 3,800 jobs in 2019 alone.

She estimates the country has lost 2,100 newspapers since 2004, 70 of them dailies. She has begun referring to about 1,000 surviving titles as “ghost papers” because of their painfully thin staffs and reporting. She has dubbed places with few or no reporters as “news deserts.” “There is a dearth of local news at all levels,” she said. ...Tri bu

Although people still trust local media sources more than national ones, only 14 percent of the public is paying for local news, according to the Pew Research Center. If that number doesn’t rise, many newspapers and digital publishers will be unable to maintain the reporting they are doing now.

The answer sadly is "no."

As newspapers have been closing in response to a variety of economic conditions, academic researchers find negative impact on communities, as indicated in this journal article, "Dead Newspapers and Citizens’ Civic Engagement," published in Political Communication:


Using data from the 2008 and 2009 Current Population Survey (CPS) conducted by the United States Census Bureau, this article assesses the year-over-year change in the civic engagement of citizens in America’s largest metropolitan areas. Of special interest are Denver and Seattle, where the Rocky Mountain News and Seattle Post-Intelligencer closed during the intervening year. The data from the CPS indicate that civic engagement in Seattle and Denver dropped significantly from 2008 to 2009—a decline that is not consistently replicated over the same time period in other major American cities that did not lose a newspaper. The analysis suggests that this decline may plausibly be attributed to the newspaper closures in Seattle and Denver. This short-term negative effect is concerning, and whether it lasts warrants future attention.

PBS and NPR.  In some communities, local PBS and NPR stations have a pretty good online presence, and some locally-focused programming. For example, in Richmond, the local PBS station produces a program covering events in Virginia called "Currents." PBS SoCal has an array of excellent programs. Maryland Public Television runs series on farming and the outdoors. Many stations have current events shows. Some stations, often organized at the scale of a state, produce very good documentaries on local/state matters.

Alternative papers.  And alternative newspapers, like the Orange County Weekly (a spinoff of the LA Weekly). OC has over 3 million residents. Not having such a voice is a loss.  Two of my favorite papers, which covered revitalization matters in innovative ways, have been gone for awhile--Philadelphia City Paper and Baltimore City Paper.

The Miami Herald has announced it will stop publishing a Saturday edition.  That day is typically the smallest paper and the least read.  When I was high school aged, we used to vacation in Ontario, and at that time, most Canadian newspapers didn't publish on Sundays (there was a law forbidding it, but it changed), so that the Saturday paper was the big paper equivalent to the US Sunday paper, and people probably read it over both Saturday and Sunday.

I always thought that'd be a workable way to reduce costs.  The Washington Post only distributes its regular Saturday paper to subscribers.  On the newsstands, an early Sunday edition is distributed on Saturday, priced at the cost of the Sunday paper.

Nonprofit newspapers and reporting. This year, the Salt Lake Tribune has shifted to nonprofit status, the nation's first such example.

Online news websites.  Over the past 15 years, there have been many for profit and nonprofit online news websites created.  The locally focused sites tend to be created in part by journalists who've been laid off from traditional media -- not just newspapers, but magazines, radio and tv too.

But without an advertising base, it's hard for such sites to survive.  And in the online arena, it's ended up that the big amalgamators, in particular Google and Facebook, have captured much of the advertising revenue, as they operate at the scale of the nation, and in many respects you need such large numbers to generate the number of "impressions" necessary to make advertising worthwhile.

But it's in the interest of business to know what's going on, and to pay for information.