I've written about this a few times, including:

--  "Cultural plans should have an element on culture-related retail," 2018
-- "Newsstands closing in San Diego and Seattle: revisiting cultural retail planning for books and periodicals," 2019

I've mentioned record stores, which often are places for small concerts, I should kick myself for not mentioning the importance of music instrument stores.  The National Association of Music Merchants is the trade association for such stores. 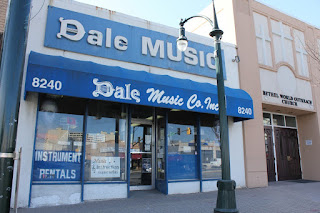 ... and at one time, music score stores, see "The song is about to end at Dale Music, a top spot for buying sheet music," Washington Post).

In the DC area, one such shop is Chuck Levin's Washington Music Center, in Wheaton, Maryland but once located on H Street NE in DC.

And the House of Musical Traditions in Takoma Park, Maryland doesn't just sell instruments, but has an active program promoting music.

Stores focusing on the piano are in serious decline ("Piano Stores Closing As Fewer Kids Taking Up Instrument," Billboard Magazine).

In Logan, Utah there is the KSM Music Store, featured in a Salt Lake Weekly story, "Building Bridges" (which reminded me of my omission) or in Salt Lake City not only are there many instrument shops, such as Acoustic Music SLC which sells instruments, provides lesson and instruction, and holds small concerts, there is the Violin Making School of America.

While depending on the area there are plenty of such stores, culture plans should recognize the importance of various types of cultural-focused retail from book stores to music instrument stores, and include the possibility of support for this type of retail as needed.

Henry Goldrich, Gear Guru to Rock Stars, Is Dead at 88