All the Trump Administration's promotion of the oil industry and expanded exploration and production, especially through the sales of mineral leases on public lands ("Trump ‘turns back the clock’ by luring drilling companies to pristine lands," Guardian) looks to go to nought because of the current pandemic-related drop in oil demand, heightened by competition between producing nations who need high prices to fund their national economies ("Russia Is Losing the Oil War Against Saudi Arabia—and the Middle East," Foreign Policy).

Fracking-produced oil needs to sell for at $40/barrel for producers to break even.

Which means dusting off a 2014 blog entry, "I get tired of the articles that ascribe Houston's economic success to its lack of zoning," where I made the point that all the talk in the planning profession by conservative thinkers ascribing the economic success of the City of Houston to its lack of zoning misses the point that the primary driving force of the city's economy is its position as the headquarters city of the global oil industry.

(Another benefit of "planning" for Houston vis a vis legacy center cities is liberal annexation policies. For the most part, it has been able to grow outward, absorbing outlying communities that in other places would be standalone suburbs.) 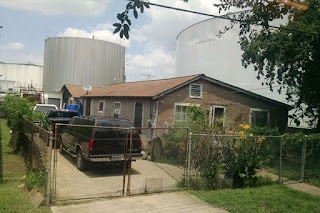 Grain storage facility next to a house in the Old Town Harrisburg neighborhood  ("The weirdest images to come from Houston's lack of zoning laws," San Francisco Chronicle; note that the "weird images" aren't all that weird, but common in edge condition situations--edge being defined as the line between areas with different zoning, such as industrial vs. residential).

If Houston had zoning, the city would still thrive economically, although development would take more time and cost more, so long as the oil industry remains healthy. 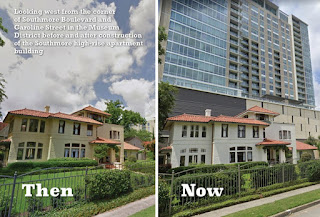 And there would be more separation between residential and commercial/industrial areas ("Houston doesn’t have zoning, but there are workarounds," Kinder Institute, Rice University).

But lack of zoning won't increase demand in the face of a sputtering economy.

In general, it happens that the relative success of the US economy is largely dependent on oil ("The Petro States of America," Bloomberg).

This is true not just in terms of driving the housing industry, manufacturing, and finance because of the automobile-dependent mobility paradigm, but for economic activity and investment more generally ("Oil and Gas Sector Increasingly Influences U.S. Business Fixed Investment," Dallas Federal Reserve).

Are you worry about your Business, Due to COVID-19, Many businesses lost their revenue. But Our Digital Marketing Company USA Grow your business in less time. services we provide are design, Web development, online marketing, business, Web hosting and much more, we give a special discount for our customers.