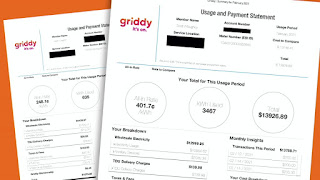 A bill from Griddy for a few days last week.

Given the debacle in Texas last week, with more than 4 million out of electricity, wrecked water systems, four day electricity bills of as much as $16,000, 30+ dead people, and billions of dollars of damage to houses and businesses, it's clear that the State of Texas government--legislative, executive, and regulatory--built an electricity system for most of the state that accentuated risk, rather than reduced it.

-- "Talk and lying versus doing: The electricity crisis in Texas is produced by state regulatory failure"

In a comment on an article someone likened it to Florida and hurricanes, always looking for FEMA and the federal government for disaster relief afterwards. 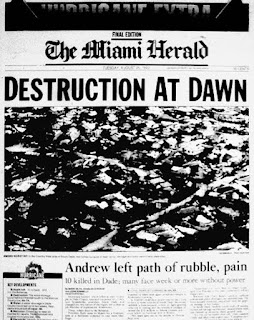 South Florida.  I didn't think that was fair, because, I guess given the increasing examples of government failure, shockingly, after Hurricane Andrew devastated so many South Florida communities in 1992, recognizing poor building practices accentuated damage and destruction, they fortified South Florida's building regulations to provide better protection against hurricanes ("After Andrew, Florida Changed Its Approach to Hurricanes," New York Times).

Not only did they improve regulations on paper, they built the inspection and regulatory regime to ensure that buildings were actually constructed to be stronger ("Fla. Building Codes, Revamped Since Andrew, Still Being Worked," Insurance Journal, 2007).

Today though, with climate change, Florida is discovering that stronger requirements need to be extended across the state, whereas before they believed the worst storm effects would be concentrated in South Florida. 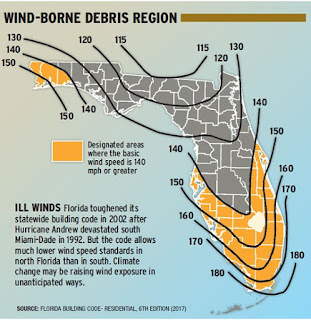 And some firms are building beyond minimum requirements out of a recognition that codes are behind the reality of climate change and ever worsening and extreme weather ("Lessons of Resilience From Hurricane Michael," Engineering News-Record).Now, while we think of Florida as being Republican, the fact is the stronger building codes were enacted during a period of Democratic leadership.
It's more likely that strengthening of the codes in the face of worse storms, such as demonstrated by Hurricane Michael in 2018, which severely impacted North Florida, won't be happening going forward, because anti-science Republicans control the state government ("South Florida’s Hurricane Building Code is Strong—And North Florida’s Could Be Stronger," Weather Underground, "Toughen Florida's Building Codes," Tampa Bay Times, "Florida’s building code is tough, but Michael was tougher. Is it time for a rewrite?," Miami Herald). 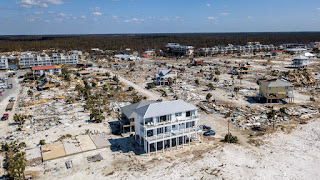 Because it was built far stronger than required by the building codes, this elevated house that its owners call the Sand Palace, on 36th Street in Mexico Beach, came through Hurricane Michael almost unscathed. [Johnny Milano for the New York Times]

Tulsa.  Historically, Tulsa was prone to bad flooding, resulting in deaths and hundreds of millions of dollars of property damage. While the city had been engaging in floodwater management initiatives since the 1970s, in 1984, after flooding which resulted in 14 deaths, the city created a Department of Stormwater Management and developed a Citywide Flood and Stormwater Management Plan, which provides for specific improvements across the city ("In Tulsa, a National Blueprint for Managing Floods as Cities Grow and Climate Changes," NPR).

-- From Roof Top to River: Tulsa's Approach to Floodplain and Stormwater Management, City of Tulsa

The primary focus of the plan is removing buildings from the flood plain and converting these spaces to greenways and parks as a way to absorb flooding while minimizing damage. The plan has been frequently updated--the latest iteration was approved in 2017--and since 1990, no structure built before 1987 has been damaged by flooding.

Unlike Florida today or Texas, this process occurred under Republican Administrations. 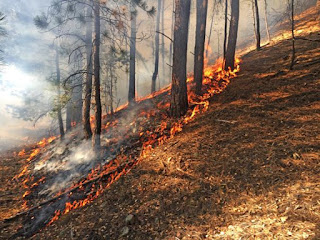 After nearby Los Alamos experienced millions of dollars of wildfire-related damage to their water resources, Santa Fe figured it would make sense to be proactive ("For a Warming World, A New Strategy for Protecting Watersheds," Yale, "Fire and Rain: The One-Two Punch of Flooding After Blazes," National Geographic).

They created a watershed fire protection plan and a water fund to pay for various land protection initiatives. Originally, private and philanthropic donations paid for the program, now it's funded through dedicated taxes.

Conclusion.  It's possible for governments to react to disaster in ways that strengthen resiliency going forward.  (There are other positive and negative examples I could have included, from hardening buildings from earthquakes to ignoring coastal water rise and flooding.)

But Texas had two chances, in 1989 and 2011.  Now in 2021 there are 30+ deaths and $40 billion of damage which for the most part, could have been avoided had they responded like Florida after Hurricane Andrew, Tulsa after deathly floods in 1984, or Santa Fe, which acted proactively, after witnessing the devastating effects from fire on water resources in nearby Los Alamos, New Mexico.

Note that the US Government is taking a stronger position against construction in flood plains ("Climate Threats Could Mean Big Jumps in Insurance Costs This Year," New York Times), which has taken decades to come about, mostly as a result of legislative pushback.