The Washington Post reports ("Surprise news from the miners union gives Democrats an opening against Trumpism" ) that the United Mine Workers Union, recognizing the decline of fossil fuel production and coal mining specifically, has released a policy paper, Preserving Coal Country, recommending:

tax credits to incentivize manufacturers to make things like solar panels and wind turbines in areas long dominated by coal. It calls for more federal money to be spent on retraining dislocated miners.
And it outlines plans for research and development funding to make coal cleaner, facilitate carbon capture and storage, and explore other ways to slow the transition to a decarbonized future, while acknowledging that this transition will happen no matter what.

It's in line with the op-ed written last November by a number of Coal Country mayors, suggesting a midwest Marshall Plan ("Eight mayors: We need a Marshall Plan for Middle America," Washington Post), which led me to write the post, "What should a domestic Marshall Plan/21st Century New Deal look like?," which was nationally focused.
Even if I thought that we need a nation-wide program, that just focusing on coal country isn't enough, it's impressive that these mayors are trying to get federal, state, and local governments focused on planning somewhat proactively to mitigate decline. 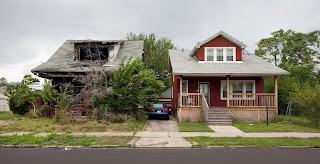 Detroit.
The alternative is what happened to cities like Detroit, Flint, and Pittsburgh after economic dislocation in response to industrial closure on a massive scale (although Pittsburgh is reviving because of universities and medical care, but after decades of wrenching change and decline, "For Pittsburgh, There’s Life After Steel," New York Times). 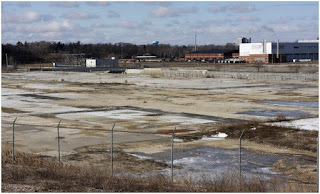 Site of the first Chevrolet plant in Flint, Michigan.
Basically while it is economic-based devastation, it's as if these cities were destroyed by earthquakes or volcanic eruptions -- natural disasters -- the devastation is so severe, long lasting, and has reshaped the community in deep ways.
Interestingly, interests in the steel industry produced a similar paper in 1980, but when Ronald Reagan beat Jimmy Carter, the federal government evinced no interest ("Carter's Steel Plan Faces A Dim Future," Washington Post, 1980).
-- "REPORT TO TOE PRESIDENT BY THE STEEL TRIPARTITE ADVISORY COMMITTEE ON THE UNITED STATES STEEL INDUSTRY,"
But even the Carter Administration wasn't prepared to go as far as some of the recommendations ("Lessons from the steel crisis of the 1980s," Conversation). 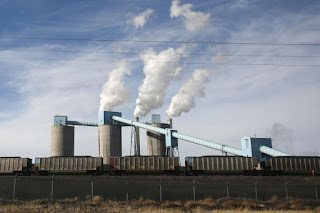 A train carries coal to Basin Electric Power Co-Op Laramie River Station in Wheatland on Thursday. After a devastating year for the industry, some believe coal could bounce back somewhat in 2021. Cayla Nimmo, Star-Tribune.
Note that the issue isn't just one for miners, but also coal-fired power plants and the surrounding communities, which also suffer economic devastation when the plants close.
-- "Planning for the local impacts of coal facility closure: Emerging strategies in the U.S. West," Resources Policy, 2018
-- "APS's plan for closing coal plants could be a gamechanger, analysts say, but who will pay?," Utility Dive
-- "Imminent Hopi-Navajo budget crisis as coal industry collapses, Institute for Energy Economics and Financial Analysis
-- "A look ahead: It was a bruising year for Wyoming coal. What could the new year bring?," Casper Star-Tribune
=============
Ironically, after I wrote this, there was an episode of "Connected: A Search for Unity" on the PBS World channel, about McDowell County, West Virginia, a once super thriving county when its coal mines were operating, and now pretty destitute, since those mines closed in 1985 ("McDowell County’s grit, camaraderie profiled in nationwide documentary," WVNS-TV).
Interestingly, the mines in McDowell County produced coking coal, which is used as a component of the steel making process, to remove impurities and improve hardness.  So the story of the McDowell County's decline is more part of the story of the steel industry and its decline, more than it is of the coal industry.  To improve its profits, US Steel created an integrated coking coal production operation in the County, which operated until the mid 1980s.

Discussion of similar issues in Alberta.

I haven't read all the links, but do you think 1) the plan(s) have a chance at happening and 2) are a good idea?

Esp w/ say solar panel manufacturing is that realistic in the US?

Rather than dumping money into declining places which will have no economic reason to exist, a better policy would be to focus on mobility. This may mean incentives and outright assistance for people to resettle in other areas, whether they be city dwellers moving to less dense, less expensive areas where work is available to more suit their education and skillset, or people from more rural areas moving closer to urban economies. Politically, this is probably impossible. But plenty of isolated places need to just go back to nature. Meanwhile some have legacy infrastructure which can be improved, and take in many many people. Commence orderly retreat from all flood areas, places that spontaneously combust on a regular basis, and places lacking natural sufficient water supply. While we're at it, one-child policy for the next few hundred years, if we even make it past the first hundred.