Transit has been devastated by the pandemic, first because people didn't want to be in contained spaces -- although it turns out that transit riding hasn't been associated with catching the virus, and second because closure of offices and schools dropped demand for riding precipitously.

If more people telework, transit demand is going to experience a sustained dropped, which hurts not just financially, but also in terms of the promotion of compact development.

1.  Reduced fares.  WMATA, operator of Metrorail and Metrobus in the DC metropolitan area, has some of the highest transit fares in the United States.  The Board is considering price reductions as one initiative in getting ridership back ("A $2 Flat Metro Fare? It Could Happen (Temporarily)," Washingtonian Magazine).

2.  Free transit.  DASH, the intra-Alexandria bus service in Northern Virginia, has announced that effective in September, they will shift to free transit ("Alexandria mayor proposes free DASH bus service for all," WTOP radio).  This follows a reorganization of their bus transit network a couple years ago as part of the update of their transit plan, called the Transit Development Vision, which is being rolled out year by year.

-- "Revisiting free transit in the wake of the decision in Kansas City ... and Lawrence, Massachusetts," 2019 What makes the service especially interesting us that it runs overnight, from 10:30pm to 6am, when regular bus services stop operating, and take people to transit stops for routes that run 24 hours.

This service is an example of what I call services within the tertiary transit subnetwork.  There are many such examples.  Basically they are intra-district transit services, and often on the edges of transit systems.

-- "Intra-neighborhood (tertiary) transit revisited because of new San Diego service," 2016
-- "A thought about an intra-district transit network for Tysons," 2020
-- "Why microtransit isn't likely to be a source of great profits for private firms: labor," 2019 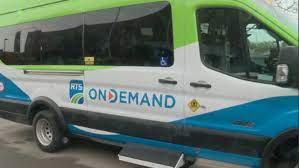 They are replacing fixed route bus service with an on demand service ("Big changes coming to RTS bus system, including 'on-demand' services," WHAM-TV).  From the article:

More buses will be reassigned to cover the most frequently-used routes, mostly within city limits.

“Ten of them are going to run every fifteen minutes from 6 a.m. to 6 p.m.," said Carpenter. "The others will run every 30 minutes.”

In order to do that, lesser-used routes in places like Webster, Greece and Henrietta have been cut. That's where the new "on-demand" shuttle will come in handy. By using an app or calling a hotline number, commuters can request the shuttle to pick them up. It will then either bring them to their destination or to a bus route.

Sacramento Bee: Transit services are getting easier to use in the Sacramento region. Here’s why.
https://www.sacbee.com/news/local/transportation/article251236474.html

Nice post. I used to be checking constantly this blog and I am impressed! Extremely useful info particularly the ultimate section 🙂 I take care of such information a lot. I was seeking this certain information for a long time. Thank you and best of luck.
integrity a way of life speech

BART cutting fares in half as a promotion.

After showing its worth during pandemic, momentum builds for free or reduced-fare transit - Washington Post